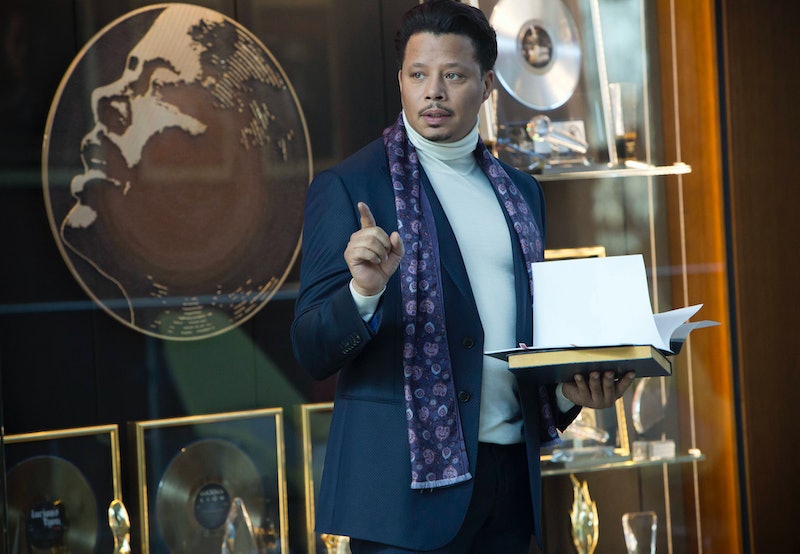 As the clock ticks ever closer to 2015, it's time to start looking forward to the second half of this television season, including an intriguing new FOX series called Empire . Fall 2014 saw the rise of a few bonafide hits — How To Get Away With Murder and The Flash, for example — but also more than its fair share of flops. Farewell, Manhattan Love Story and Mulaney, we hardly knew ye. The midseason shows premiering in Winter 2015 will likely be as much of a mixed bag — but in Empire, FOX has perhaps the most high-profile debut of the new year on its hands (which is fortunate, since the fall was a disaster for the network, with three out of its four new shows already cancelled). So while we know that the drama has a lot of potential, it brings one big question: Is Empire based on a true story?

Empire was created by Lee Daniels, the director/producer of 2009's Precious and last year's The Butler. He is joined by his Butler screenwriter Danny Strong (who also co-wrote both The Hunger Games: Mockingjay films). The pilot episode was directed by Daniels and written by Strong, and the pair will serve as executive producers for the rest of the season. Aside from the Daniels/Strong reunion, the series also features the reunion of Daniels and star Terrence Howard, who worked together on The Butler, and the reunion of co-stars Howard and Taraji P. Henson, who appeared opposite each other in 2005's Oscar-nominated film Hustle & Flow.

The series is described as, "a sexy and powerful new drama about the head of a music empire whose three sons and ex-wife all battle for his throne," and it will feature an original soundtrack written by Timbaland. (In terms of how the show will incorporate its music, think more Nashville than Glee.) Since the music industry is undoubtedly rife with stories of drama and backstabbing and power-hungry figures with larger-than-life personalities, it's natural to wonder whether Empire is based on a true story. The answer is: yes and no.

While the plot is entirely fictional, Daniels has admitted that he based some of the characters on very real people. Like who? you may ask. Famous musicians and artists whose stories are usually found in tabloids instead of on television? Not even close. The inspiration behind Empire's cast came from a source much closer to the show's creator: his own family.

In describing his series to The Hollywood Reporter, Daniels said, "I'm just so thankful for Fox. This is really some cutting-edge stuff, it's really out there. They understood my and Danny [Strong]'s vision and they embraced it. They encouraged us to create these incredible characters who are based on real people, family members of mine. I think people will be surprised by the subject matter. They won't know what to make of some of our situations."

Apart from Howard and Henson, the musical drama also stars Jussie Smollett — older brother to Friday Night Lights actress Jurnee Smollett — as one of the scions to the empire (pictured above with Henson), and American Horror Story's Gabourey Sidibe in a recurring role as Howard's assistant. (In yet another reunion, Empire re-teams Sidibe and Daniels, the man who directed her to an Oscar nom for Precious.)

With so much awards pedigree behind the scenes, perhaps Daniels' family will forgive him for turning them into a bunch of manipulators, schemers, and egomaniacs. Heck, I'd let someone portray me as a serial killer as long as they got Jake Gyllenhaal for the role!