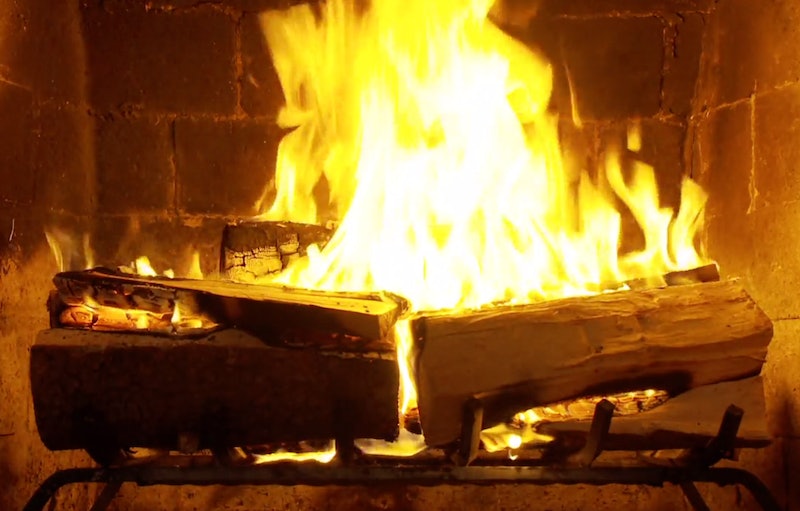 I don't know if you've noticed this, but just about every traditional Christmas song references a fireplace. In "Christmas Song," Nat King Cole warbles on about "chestnuts roasting on an open fire." In the mildly creepy "Baby It's Cold Outside," the child abductor in the song sings, "listen to the fireplace roar." Even in the number one Christmas classic of all time, "Merry Christmas, Happy Holidays," by 'N Sync, fire is mentioned. And as a gal who is living in an apartment without a chimney from which to hang my stockings with care, I'm beginning to feel a little left out. If this applies to you, too, fear not. We aren't without options. This is where the TV yule log comes in.

And for Netflix subscribers, the yule log gets a whole lot sweeter. It's called "Fireplace For Your Home," and it's vastly superior to TV channels that just play the video of the fireplace 24/7 during the holiday season (although those will work in a pinch). If you thought Gilmore Girls was the best thing to happen to Netflix, think again. It's the virtual fireplace, and in case you aren't yet convinced, I'll let the official trailer do all the talking.

There are three episodes, and you will be blown away by just how real they make the fireplace experience. In Episode 1, "Crackling Yule Log Fireplace," you get jazzy Christmas music in the background as the fire crackles. In Episode 2, "Crackling Fireplace," there's no music — just crackling. Is that romantic or what? And if you guessed that in Episode 3, "Crackling Fireplace with Music," the music returns, you're correct! This is for those of you who want the fireplace experience but, for some insane reason, are over Christmas music. I must warn you: The soundtrack to this one will make you feel like you're shopping at Kohl's with your grandma, and not in a good way.

Obviously, the yule log lends itself perfectly to a drinking game, as all things do this holiday season. Whether you're trapped in your house with family members who won't quit asking you when you're going to get married/have kids/get a real job, cuddled up on the couch with your significant other, or celebrating alone, get out the booze and the fuzzy Santa socks, because it's time I introduce you to the official Yule Log Captions Drinking Game.

The supplies you need are few and simple:

Are you ready? Let's play.

Actually Start to Feel Warm, Before Forgetting It's Actually a Fake Fireplace

Take another shot. You're not drunk enough. If you actually flinch when sparks start flying, take two shots.

You Begin to Ponder the Complexities of Human Existence

What is the meaning of life? Are aliens real? Why do they call them feet? Take another shot.

Drink the rest of the bottle.