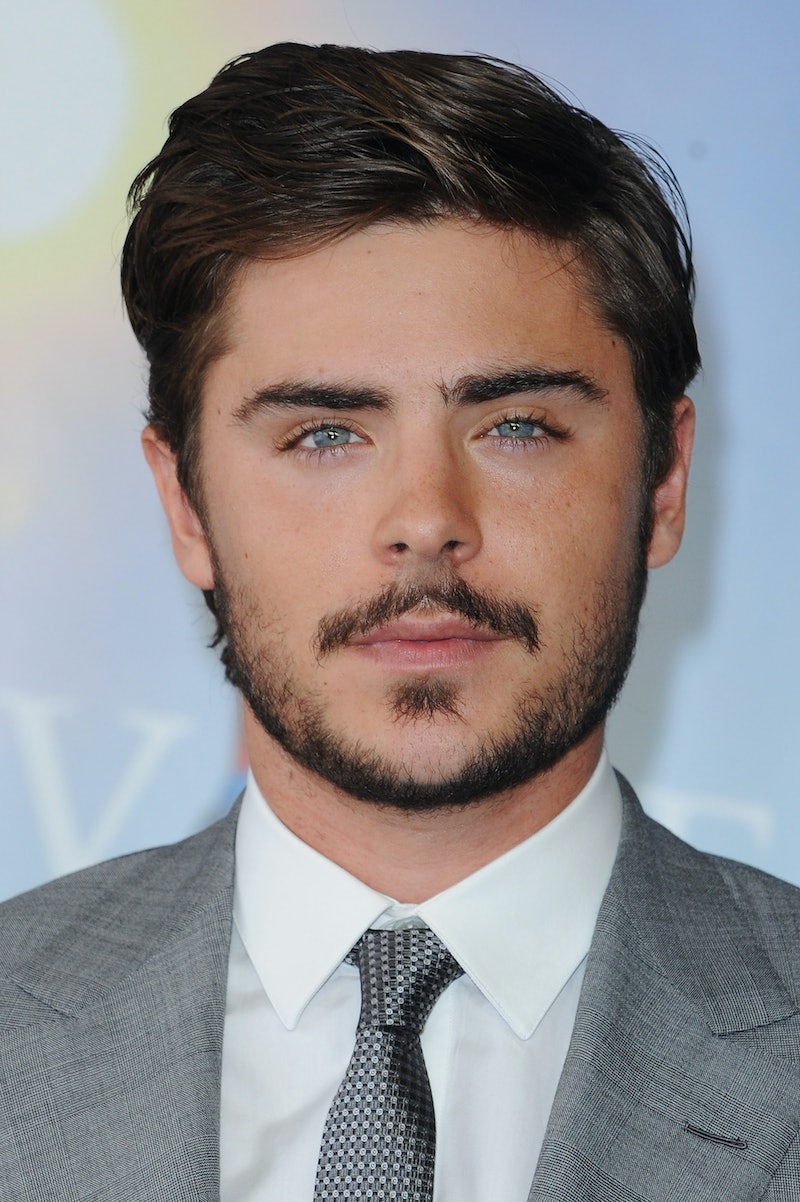 Does anyone else feel like Zac Efron keeps disappearing only to pop up at random times with a dance video or something else equally strange/awesome? Well he's done so again and instead of a dance routine he's grown some interesting facial hair. On Tuesday, Joseph Gordon-Levitt teased the upcoming episode of his show hitRECord by tweeting a picture of Zac Efron with a full mustache. I'm talking Ron Swanson-level facial hair here.

Strangely it doesn't look that bad on him, but that's because Efron is so attractive he could shave his head and leave a rattail and I'd probably still think he was hot. The new look is definitely different for him, but it's not the first time he's let his facial hair grow.

The actor is no stranger to a little scruff and has even walked the line all the way to an actual beard before. Now he can add "superb mustache growing skills" to his resume. But while I still think he's attractive even when his hair is taking over his face, I'm not sure it's my favorite look on him. To decide for sure I've ranked all of Efron's facial hair. If he's ever wondering what his hair to face ratio should be, here's my definitive list from least to most hot.

Unable to Grow Any Facial Hair

This throwback Efron pic is a nice reminder of what he looked like before he was even able to grow a mustache. He's come so far.

It looks like he's nuzzling a kitten. It's too cute.

Not sexy, but kind of funny. It ranks slightly higher than a catbeard because I like a good sense of humor about facial hair.

It's definitely not my favorite Efron look, but I can appreciate his mustache all the same. At least it's not one of those thin, creepy-looking ones.

This is classic Efron and pretty attractive. But as it turns out, adding a smattering of facial hair makes him even hotter than he is here which is why beardless-Efron lands in the middle of this list.

He looks like a really hot lumberjack here. This probably isn't classified as a full beard, but it's the closest Efron's ever gotten to one. I think he looks both mature and sexy here. But there's still one Efron facial hair type that can beat his lumberjack look.

Just enough so it's there, but not so much that it overpowers his beautiful face. This is the level of facial hair Efron should keep for always.