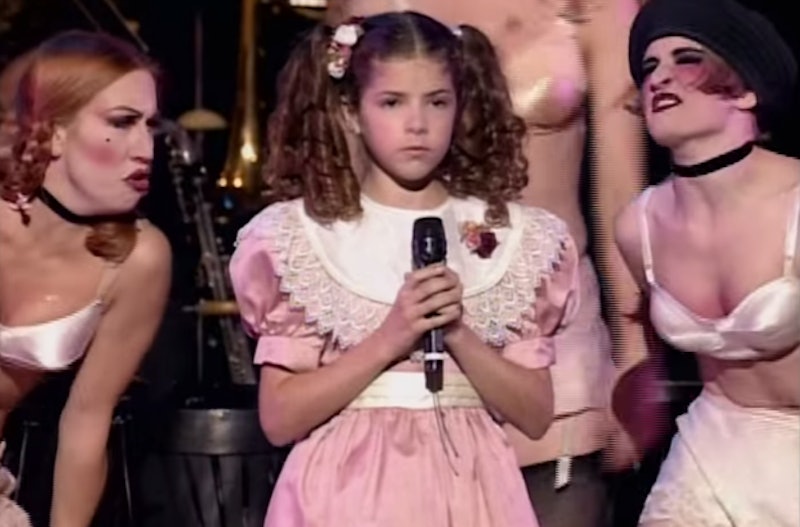 On Christmas Day, a new round of severely entertaining fare will hit movie theaters worldwide. Chief among them is the big screen adaptation of Stephen Sondheim's Into the Woods . It's a star-studded affair: Meryl Streep's there to throw all the characters around, including Anna Kendrick's Cinderella and Emily Blunt's Baker's Wife. Some of the cast, though, like Chris Pine (who'll be playing a pompous prince), have not had their singing abilities aired to the public much before.

Only actually hearing everyone's contributions to the music will be able to determine how well everyone does in their respective parts — but until then there's a certain amount of fun to be had just digging through their musical histories and watching these people sing for the (often relatively smaller) masses in their pre-Woods days. So here are some musical moments from Into the Woods' main cast.

It could be argued that this entire post is really a ploy to get you to watch this video of an adorable young Anna Kendrick (aged 12) singing a song with the raunchy Kit Kat Girls of Cabaret. I won't deny it.

Another must-see: Kendrick's borderline iconic take on "Ladies Who Lunch" from the underrated Camp.

Pro tip: If you're watching a talk show and either the host or Pine himself mentions that Pine likes to sing in the shower, prepare yourself, because this is Pine's go-to segue into singing. He's gunning for that Frank Sinatra biopic, you can tell.

And here he is singing much more in Small Town Saturday Night.

Oh, Meryl. Where to begin with Ms. Streep? There's this great moment from Postcards From the Edge where she sings that beautiful song "You Don't Know Me:"

This isn't as great of a showcase (it's karaoke that appears to have been performed drunk), but it's fun nevertheless:

Some good dance moves here, too!

We all know at this point that Johnny Depp can sing. So here he is singing "Creep" by Radiohead, because of course that's something that's out there.

I did not know before this moment that soap operas like The Bold & the Beautiful sometimes busted out big musical moments.

I could listen to "I'm Still Here" from here to eternity.

She starred in the Broadway revival of Annie! Gotta love an Annie.

Rob Marshall really pulled from the soap opera pool for this one. Here's Magnussen performing at an As the World Turns event.

More like this
Taylor Swift Is Writing & Directing Her First Movie
By Jake Viswanath
Yes, That's Lindsay Lohan's Sister Singing In The 'Falling For Christmas' Movie
By Radhika Menon
The 'Love, Lizzo' Harry Styles Scene Is Just 1 Moment That Made Fans Feel Seen
By Brad Witter
This James Bond Event At Abbey Road Studios Was A 007 Fan's Dream
By Samantha Rollins
Get Even More From Bustle — Sign Up For The Newsletter