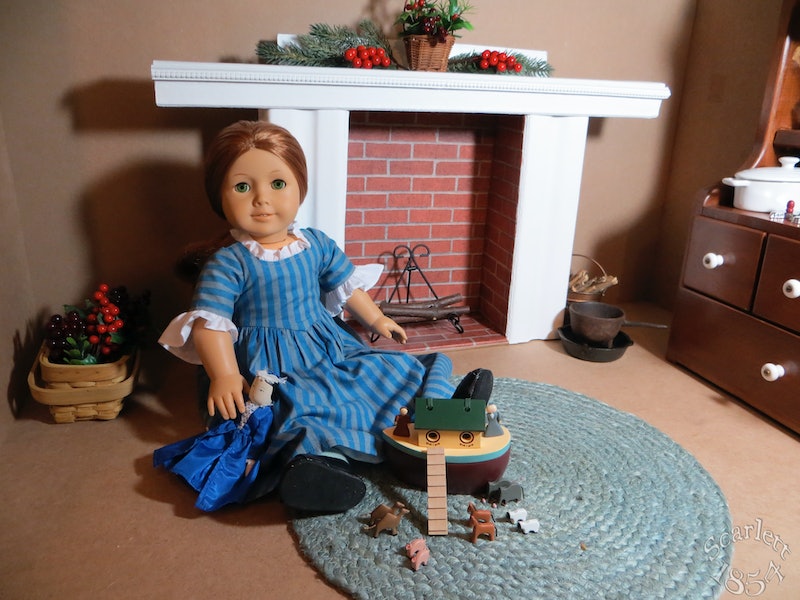 When you were a kid, how cool would it have been to celebrate Christmas like your favorite American Girl doll? When I was a child, I desperately sought traditions. Partly because I wanted something to pass on to my children come Christmastime, but mostly because... I wanted attention. Somehow traditions — perhaps one where the eldest daughter has to sing her favorite Christmas carol in front of everyone? — would give me that.

That's where American Girl dolls came in. While other friends had deep rooted Christmas rituals of eating fish and opening a gift or two on Christmas Eve, it seemed that my family's traditions included Mom asking me to vacuum the house before our guests arrived, and trying to convince my younger sister that, while yes, a man climbing into your house uninvited is technically a burglar, it's different when Santa does it.

So I invented my own tradition — of reading each of the American Girl's Christmas stories on Christmas Eve. An easy feat, seeing as I was definitely in high school, and these books are written on a third grade reading level. Fast forward a few years later, and here we are, you reading this, and me with a working knowledge of the Christmas adventures of the core cast of The American Girls Collection®.

This is finally the attention I was seeking, how very Felicity (1774) of me. Here's how you can celebrate your Christmas like your favorite American Girl.

How Felicity celebrates: In Felicity's Christmas story, Felicity is invited to a dancing lesson at the Governor's Palace. It's literally the most wonderful honor she can imagine, and she almost loses her mind. Her mother, who is referred to as "Mother," promises to make Felicity a new gown for the event. But in true Hero's Journey fashion, an obstacle arises: Mother becomes terribly ill. Felicity cares for her, but is sad inside because without a new gown, she won't be able to go to the palace.

That is until Christmas does what Christmas does, and Felicity gets her beautiful new gown! But wait — another snafu! No one is available to accompany Felicity to the palace! She feels defeated, but then Ben, sweet sweet Ben, the "quiet apprentice living with the Merrimans," speaks up and escorts Felicity to the biggest event in the new world thus far (remember, the Constitution hasn't been signed yet). Oh also, in the beginning of the book, Ben is LIVID that Felicity even considers going to the party, because the governor "represents the king here in Virginia." "You know the king and governor have treated us badly," Ben yells.

How you can celebrate like Felicity: When you get invited to your next holiday party, ask your mother to make you a beautiful gown. When she refuses, go buy one and pretend she made it. Then, find your friend with opposing political views (ideally this person would already be living in your house as an apprentice but I'll make exceptions), and have them escort you to the party. Then, "ride together home in the silvery night."

How Josefina celebrates: Josefina's story is a little more heartfelt than Felicity's — that's what 50 years can do for ya. Josefina just wants her family to have a happy Christmas. It's only the second holiday after their mother has died, and she misses her mom! After she discovers that an embroidered altar cloth her mom made has been damaged, she works tirelessly to repair it. And with a little help from her family and the holiday spirit, she and her three sisters discover that participating in the traditions and sharing memories helps keep Mamá alive in their hearts.

How you can celebrate like Josefina: When you gather around the big tree this year, share your favorite memories with each other, and make sure to let each person know how special they are to you. You have no idea how much it may mean to someone else, or how good you'll feel after.

How Kirsten celebrates: It's Kirsten's first Christmas in America!! She wants to keep her family's old Swedish traditions alive on the frontier, so she secretly plans a Saint Lucia celebration. Sneaky! But somehow everything ends up hinging on a trip in to town with Papa. When they finally leave, they get caught in the worst blizzard. Papa gets badly hurt (he twists his knee), and suddenly it's up to Kirsten to keep them safe. She pushes through and ducks into a cave she had found when she was exploring with her Native American friends and boom, she saves the day! Her Saint Lucia celebration eventually goes off without a hitch (she wears an actual wreath with lit candles on her head, can you say fire hazard?), and everyone is surprised and laughing. Papa makes a full recovery.

How you can celebrate like Kirsten: Plan a secret surprise for your family! If there are any traditions you lost as you got older, bring them back! Wear a wreath on your head! Of course, you can also just hang out in a cave with your dad while it snows.

How Addy celebrates: Addy's story is intense. She's a recently freed slave and now lives with her mother, but not her father, brother or sister. When she spots a beautiful red scarf in a shop, she's determined to save her money and buy it for her mom. But, when Addy sees the hardships of other newly freed slaves, she knows she must help them too. Can she help them and still save money for Momma's scarf?

How you can celebrate like Addy: Addy's story is pretty devastating. She was a slave for most her of her life. But, if I had to give a suggestion, I would say you could donate to charity to help others who are struggling, kind of like Addy does. Or you could, you know, work to fight against the systemic oppression and racism in our society. Not a bad idea, huh?

How Samantha celebrates: Samantha is raised by her wealthy grandmother. But even though Samantha is wealthy, she's not an idiot. She sees that times are not good for everybody, which is why she tries to make a difference in the life of her friend Nellie, a servant girl. To be honest, Samantha's is the only story of these I've never actually read all the way through, so I can't tell you exactly what happens next, but I will say that according to a synopsis online, "things start to go wrong when Uncle Gard brings a special friend home for the holidays." Uh oh!

How Kit celebrates: Kit was my absolute favorite American Girl. I became incredibly obsessed with the Great Depression because of her, and her character might be what prompted me to want to write, who knows. In Kit's Christmas story, she overhears that her family is broke and may lose their house. She wants to earn money and help, but she's stuck helping her rich Uncle Hendrick.

Basically her uncle would offer her a nickel each day to take a cab home from his place, but Kit decided to pocket the money and walk instead. Christmas is saved when Kit is able to use her nickels to pay the electric bill and her family can turn the Christmas tree lights on.

How you can celebrate like Kit: Give your mom a handful of nickels for Christmas and tell her to spoil herself by turning the lights on.

How Molly celebrates: Molly is not a fan of the changes the war has brought, and she especially misses her father, who is away caring for the wounded soldiers. As the McIntires face a cheerless holiday, Molly gets to turn things around when she sees a surprise package from her dad on the doorstep. She gets to surprise the family with it, and later when they hear his voice on the radio, it's the most magical thing!

How you can celebrate like Molly: Be extra patriotic this holiday, like Molly. Make sure your gifts are extra special surprises, or call into your family's favorite radio show and send them a special holiday message.

More like this
13 Summer Solstice Quotes To Celebrate The Longest Day Of The Year
By Sadie Trombetta
16 Novels That Paint A Realistic Portrait Of Abortion
By K.W. Colyard
Aesop's Queer Library Is Open
By Tomi Otekunrin
At 14, Jenny Han Wrote Rom-Coms About Her Friends & Fan Mail To Leo DiCaprio
By Alyssa Lapid
Get Even More From Bustle — Sign Up For The Newsletter