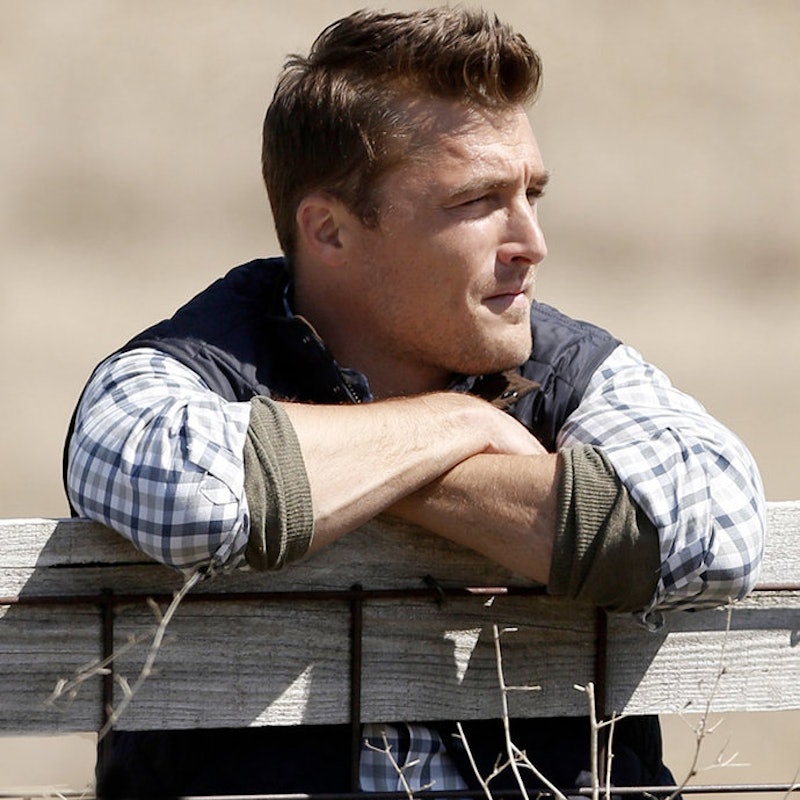 ABC is really making Chris Soules work for his paycheck. They've made him star in a number of strange Bachelor promos (like the whispering corn one, which is seared into my brain). But now they're making Chris Soules ride on a Bachelor -inspired parade float. That's right, just like those things your high school class built for prom, only this one will probably have a higher budget. The float is for the 126th Pasadena Tournament of Roses Parade on January 1. It's pretty fitting that a Bachelor float would appear in a Tournament of Roses Parade considering how closely the show is linked to the red flower.

Soules will be joined by some other Bachelor and Bachelorette stars like Trista and Ryan Sutter, Jason and Molly Mesnick, as well as Desiree Hartsock and her fiance Chris Siegfried. Two Bachelor in Paradise fan favorites Marquel Martin and Sarah Herron will also be on board.

But the best part about this float isn't just that it exists, it's that the concept for it makes it sound exactly as dorky as said high school prom parade float — except this time adults are being forced to ride on it through a crowd of thousands.

Here are all the things on the Bachelor float that basically makes it a more expensive, but still just as cheesy, prom float.

The Bachelor float will be toting the theme "Inspiring Stories" and will feature several successful Bachelor couples to prove that sometimes reality TV love really does last a lifetime (so far). Corny themes are also a prom float staple from "Sky's the Limit" to "Belong, Believe, Become."

Much like high school prom floats show off their prom court and elected king and queen, The Bachelor float will feature two married couples, one engaged couple, and Chris Soules who is looking to be apart of his own couple.

The Odd Ones Out

Prom floats tend to also include the court jesters (or class clowns), and The Bachelor float will feature Marquel Martin and Sarah Herron. They're both beloved by fans, which is probably why they're along for the ride despite the fact that they're not actually in relationships, and thus don't really fit into that whole "Inspiring Stories" theme. But when it comes to prom, there are always a few odd ones out like the prom court jesters, and the Bachelor float is no different.

Flowers Out the Wazoo

If there's anything prom and The Bachelor have in common it's too many roses. Dance corsages and boutonnieres are stuffed with them and The Bachelor float will be, too. Thousands of them to be exact, along with "other flowers, seeds, and corn husks harvested straight from Soules' farm."

The Promise of Love

Specifically for Chris Soules, who will "stand upon a wrought iron balcony beside a silver tray laden with roses" and try really, really hard not to hate his life. But it's all in the name of love, after all. And what is prom if not full of the hope for romance by people who haven't been dating all that long and will probably break up in the not too distant future? (Sounds a lot like The Bachelor.)

Hopefully some people will take pictures. If the float is half as funny as the description, fans are in for a high school-inspired treat.