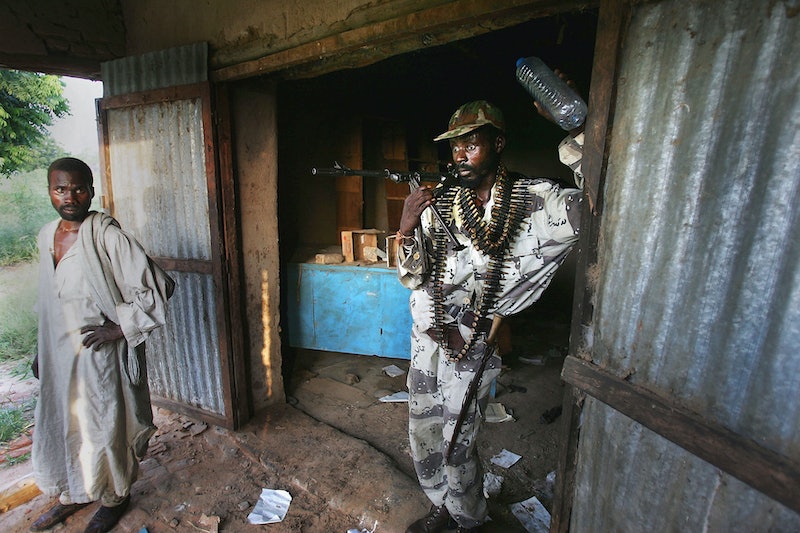 In yet another paralyzing attack on the country, suspected Boko Haram insurgents kidnapped 185 people, and killed 35 people on Sunday in a raid on Gumsuri, a remote Nigerian village located in the northeastern section of the country that borders Cameroon.

According to local officials and residents, the gunmen arrived at the village in pickup trucks and fired bullets at the men before shepherding the women and children together and taking them away. One government official told CNN, on condition of anonymity:

They gathered the women and children and took them away in trucks after burning most of the village with petrol bombs.

Although no group has officially claimed the attack, officials pointed fingers at Boko Haram, a brutal militant group whose name in English translates to "Western education is a sin." Classified a foreign terrorist organization by the U.S. State Department, the group is responsible for the horrific abduction of over 200 schoolgirls in Chibok in April this year, prompting international outrage and a "Bring Back Our Girls" campaign aimed at pressuring Nigerian authorities for their return.

Details of the attack in Gumsuri only emerged four days after it took place because of the scarcity of communication channels. Many news organizations have put the number of those kidnapped at "over 100," but CNN and the Wall Street Journal reported 185 abductions.

Meanwhile, the Cameroon army said it had rebuffed a grave Boko Haram attack on a convoy Wednesday, killing 116 militants, said the country's Defense Ministry. In Boko Haram's quest for an Islamist state, 5,000 people have died and over 300,000 displaced — making it one of the deadliest terrorist organizations in the world. In a nation of 173.6 million people, 6 million have been affected by the militant group, according to the Congressional Research Service report.

That the Cameroon military were involved in fighting Boko Haram also underscored the spilling over of its fight into Nigeria's neighboring country. In July, the group kidnapped the wife of Cameroon's vice-prime minister, although she has since been released.

According to Reuters, Boko Haram has presented the greatest threat to Nigeria, the most powerful economy in Africa. Local authorities said on Thursday said it was trying to confirm the kidnapping, reported WSJ. Mike Omeri, a government spokesperson said of Boko Haram captives:

In this regard, the government has not given up and will not give up in the search and rescue efforts.

No other official statement appears to have been made by the country's government or military about the Gumsuri attack.

One resident of the village, Modu Kalli, recounted details of the raid to CNN. He said the insurgents fired heavy weaponry on the village and poured gasoline on houses before setting them on fire. Kalli said:

We lost everything in the attack. I escaped with nothing, save the clothes I have on me.