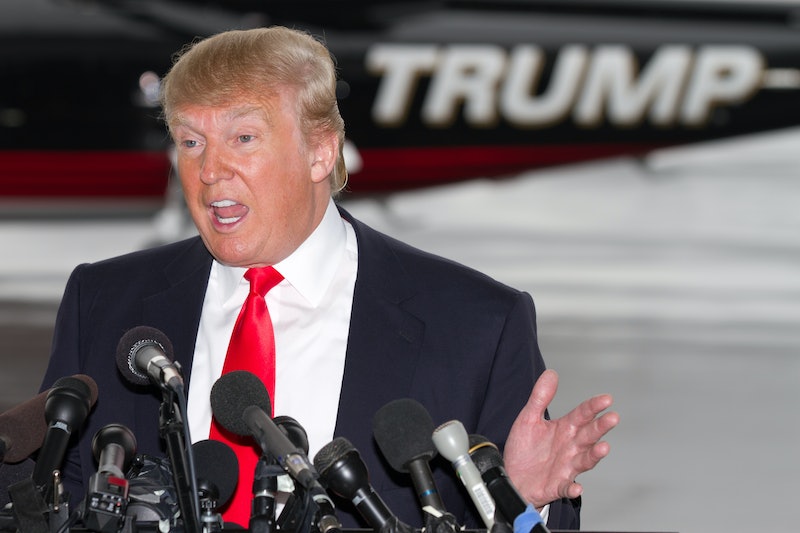 It wouldn't be the Donald if he didn't have something to say about it. One of the most bombshell news stories of the week was that the FBI allegedly confirmed that the massive Sony hack was linked to North Korea, as the public had been speculating. In response, major U.S. theater chains began pulling it from its upcoming rotation, forcing Sony to cancel the release altogether. Many have spoken out against the concession, but none as harshly as Donald Trump, who slammed Sony in a short video posted to his Facebook page. Well, at least the man's succinct.

On Wednesday, Trump posted a video of himself sitting in a brown leather chair in a disheveled office, suggesting to the world that he's too busy to issue a statement or post a tweet or make a video longer than nine seconds.

In the video, which is exactly nine seconds, he rants:

While I hear it was a terrible, terrible movie, Sony has absolutely no courage or guts. They should have never pulled it.

That's my story and I'm sticking to it! [Bites down on cigar and puts on top hat.]

That last part didn't happen, but it might as well have. Donald Trump wants to be a 1940s cartoon duck who dives into piles of gold coins, let's not kid ourselves.

And this certainly isn't the first time the real estate tycoon has lambasted Sony over the hack. Just earlier this week, Trump threw a one-two punch when he commented on the racially insensitive emails between Sony Co-Chairwoman Amy Pascal and producer Scott Rudin that joked about Obama liking the movies Django Unchained and 12 Years a Slave. In the aftermath, which has seriously jeopardized Pascal's job, she has reached out to race relations consultant Reverend Al Sharpton to discuss the emails and the lack of diversity in Hollywood.

While Sharpton had called for Pascal to resign over the racial insensitivity, Trump urged her to resign for entirely different reasons, namely for being stupid. He told the Daily Mail:

The [co-chair] of Sony, Amy Pascal, when she goes out and says, "I'm going to seek the advice of Rev. Al Sharpton," who I know very well, she should probably resign for stupidity reasons.

Trump, who is clearly not a Sharpton fan, says that the civil rights activist will toy with her, use her and then dispose of her.'

Well, now that we know where Trump stands on dealing with authoritarian countries and terrorists, is it safe to assume that he'd run the country with the same firm stance? On Monday evening, Trump said in an interview that he's "very strongly" considering a 2016 presidential bid. Do you know what that means? We (the media and the people) will be forced to actually (sort of) care about his rants, and we should all get ready for a whole lot more of them.Alternative headlines:Donald Trump Can't Keep His Mouth Shut About the Sony Hack, and This Time He Says Sony Has 'No Guts' For FoldingDonald Trump Slams Sony For Its Handling of 'The Interview,' But What Else Is New?Images: Getty Images (2)