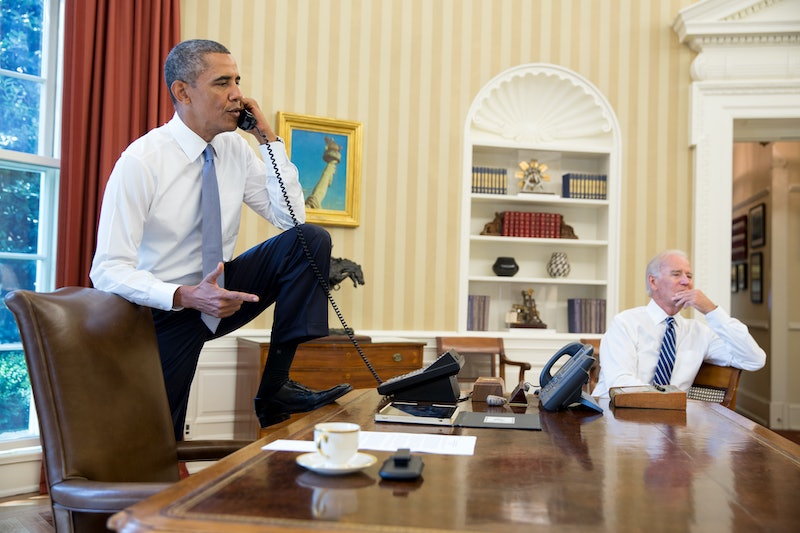 Who better to have call in to your last radio show than the President himself? This Tuesday, as Gov. Deval Patrick was joined by the hosts of Boston Public Radio for the last “Ask The Governor” show after an 8-year run, he received a special call from the POTUS.

Obama: "Uh, Governor, this is Barack Obama, formerly of Somerville. I've got a few complaints about service in and around the neighborhood, but I've moved down South since that time..."

Apparently show hosts Jim Braude and Margery Eagan helped arrange the call, but an unsuspecting Patrick was in disbelief when the caller identified himself.

But I guess President Obama’s special pronunciation of the word “Massachusetts” helped him realize he was talking to the real deal.

Obama: "I want to find out how it is that you got Massachusetts so strong and moving in the right direction."

Deval Patrick: "Mr. President, you know I love you, but you still have trouble saying Massachusetts. You know that don't you?"

Obama: "You know, there's a little lisp thing that develops when I say Massachusetts. I know how to spell it, though."

Deval Patrick: "Indeed you do. And you know where it is. You've been a great friend to all of us. Thank you.

Obama: "I just want to call in... Jim, Margery, thanks for letting me do this.

Obama: "I just want to let my dear friend know how proud I am."

The President went on to commend Gov. Patrick for his work in Massachusetts. He mentioned the state’s employment rate, budget, education, healthcare... “Deval, you done good, man,” he concluded.

President Obama lived in Somerville when he attended Harvard Law School. While there, he received multiple parking tickets that he failed to pay for 17 years — until before he entered public office. A fact that Braude didn’t let slide.

“Hey Mr. President, you paid all those parking tickets in Somerville, correct?” he asked.

"I think I had to before I took office," President Obama responded, "otherwise I wouldn't have been able to step into the Commonwealth without being arrested.

New life goal: be awesome enough to have the President call in to a radio show to sing my praises.