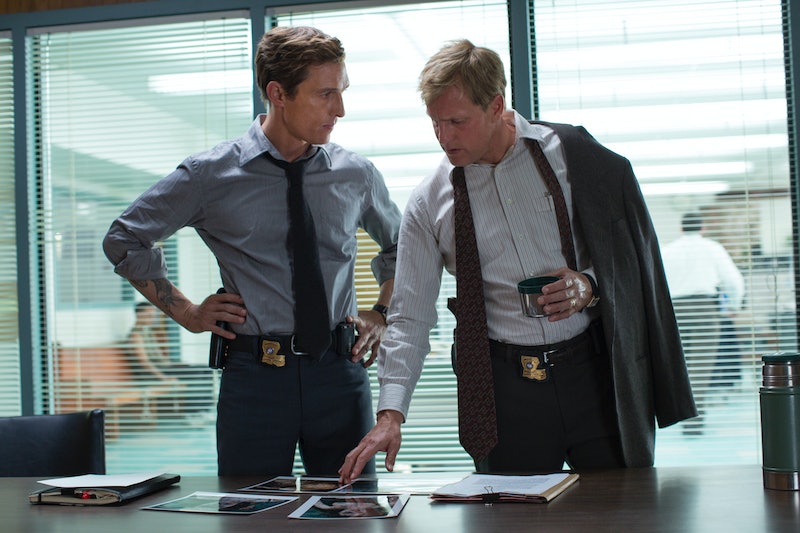 We know so much about True Detective's second season already. Announcements about the show come out almost every day. We know it'll star Colin Farrell, Vince Vaughn, Rachel McAdams, and Taylor Kitsch. We know that Nic Pizzolatto will return as writer, and Justin Lin will direct at least the first couple of episodes. We know it'll take place in California. We even know that "Jessie's Girl" singer Rick Springfield will have a part. But there's one question that's burning in our hearts: When will True Detective return for Season 2?

(Update: HBO has confirmed that True Detective Season 2 will premiere on June 21, at 9 PM.)

You're going to want to put down your Big Hug Mug and sit down before I remind you of this: True Detective isn't coming back until the summer of 2015. And there's still no official date. According to The Hollywood Reporter, HBO programming director Michael Lombardo broke the news to a crowd of journalists at the Edinburgh TV Festival, saying, "We’re going to start shooting in September for it to air next summer."

Buuuummmmmmer. I don't know about you, but I get weirdly attached to when TV shows air. Since the first season of True Detective premiered in January, I associate it with being huddled inside my apartment trying to escape the cold. Maybe the venue-change to California will make it make sense as a summer show, but it's going to take some getting used to. Or maybe I'm just being grumpy.

But maybe if you knew what I knew, you would be cranky (or, you know, existentially upset), too. I don't want to make you run for your six-pack of Lone Star cans, but there's more bad news: Lombardo was wrong, and they didn't really start filming in September. Taylor Kitsch lamented the snag on Twitter.

There's no word yet on whether or not this will delay the premiere of the second season to later in the summer. It's not like there was a firm premiere date, so we'll never really know if the postponement affected anything in the long run, or if they were able to catch up.

If there's a tiny bit of good news in all of this, it's that they are finally filming now. Springfield, at least, seems to think things are going well.

Other than that, everyone has been keeping quiet about what's going on during the filming. We really will need to wait until next summer before we catch a glimpse of what's going on in True Detective, Season 2.