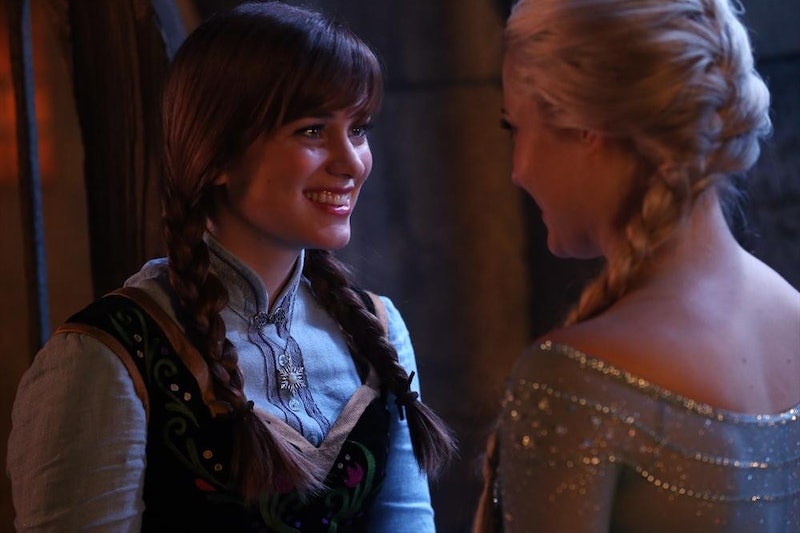 Just with a quick show of hands, who was kinda happy to see Anna, Elsa, and Kristoff disappear through that portal back to Arendelle at the end of the Once Upon A Time midseason finale? It couldn't have been just me. I know there are others out there who — while we totally enjoyed the Frozen storyline, sure — really missed the basics of OUAT. You know, the weekly flashback focusing on one character. With the introduction of Frozen, it took that idea, but then made it span 12 episodes. And after a while, I was kinda like, "I GET IT ANNA, YOU'RE ADORKABLE." So while it appears that the characters have all parted ways, is Frozen really gone for good from OUAT ?

OUAT closed the chapter on the Frozen story, we know that with 100 percent certainty. There's no lingering snow storm in Maine right now. Ingrid the Snow Queen was defeated. Anna and Elsa were reunited. They found the magical portal and traveled to Arendelle together.

Once in Arendelle, their story wrapped up even more. Hans defeated? Check. Off to a long-delayed wedding? Check. Building a snowman? Probably. The sisters reclaimed their kingdom, and basically restored balance to the Frozen force. All's well that ends well. Besides, OUAT doesn't need the Frozen royals right now, because the series is turning its attention to the new big bads of Season 4B. No more snow and ice for Storybrooke.

But, while OUAT has a new story lined up for the rest of the season, it doesn't mean we won't see our friends from Arendelle again. If the nice folks over at Disney/ABC, who at this point basically control about 80 percent of our lives, have their way, Frozen could get its own spinoff just like Once Upon A Time In Wonderland. But we all know how well that worked out.

This summer, E! caught up with ABC president Paul Lee who said, "Eddy [Kistiss] and Adam [Horwitz] are endlessly inventive, so they have glints in their eyes of stories that they can spin for years to come. So it certainly doesn't rule out their ability or my ability to go beyond Once," in regards to any sort of Frozen spinoff.

If that's not enough speculation, Kristoff himself, Scott Michael Foster, mentioned to HollywoodLife.com, "I am always always open to talk about future work! It honestly just depends on who would be doing it and would they keep everybody that was on the show. I would obviously be more willing that way. Absolutely.”

Mind you, this was back during the summer, and in the beginning stages of OUAT's Season 4 run. Things could have changed by now. The midseason finale, "Heroes and Villans" hit an all-time low for the series' ratings, which doesn't bode well for any sort of Frozen spinoff, whether now or later on down the road.

But have hope, fellow OUAT fans who didn't mind the Frozen story too much. Considering how often people die on the show yet still come back to life (looking at you, Mother Superior!), the fact that Elsa and Anna are still alive and well means their odds of returning are pretty great. And maybe next time Olaf will come too — honestly, I'd welcome that story with open arms and warm hugs.