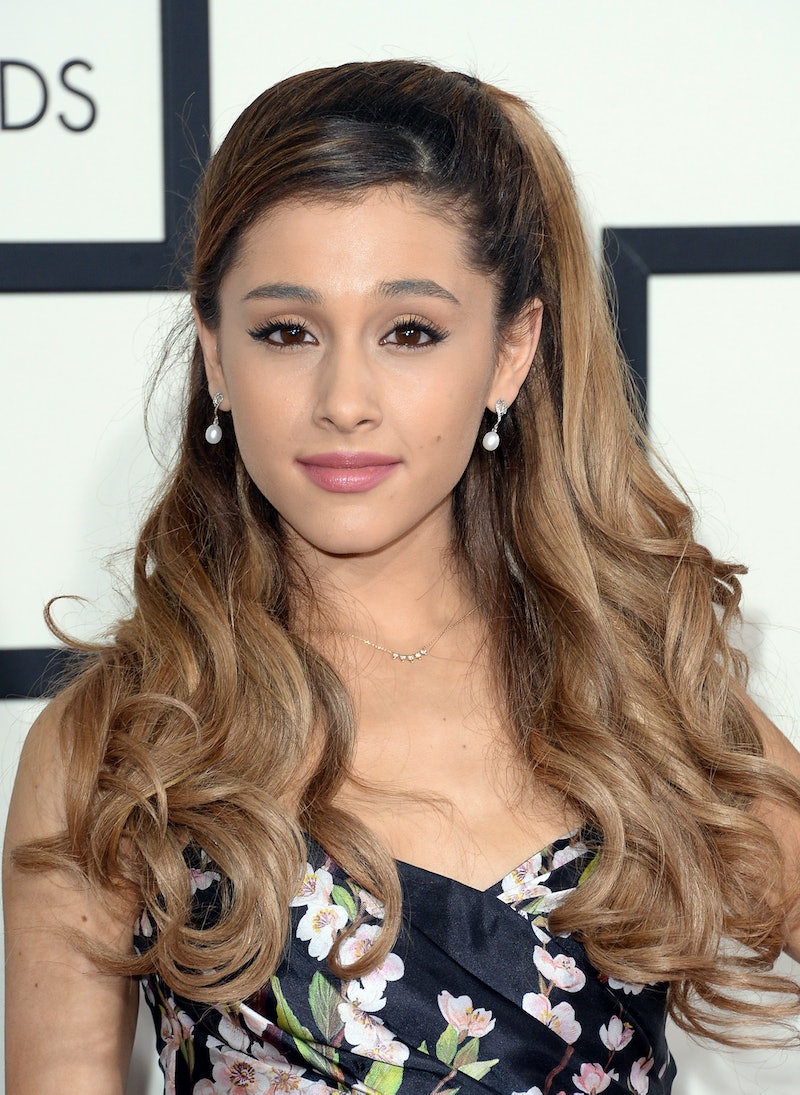 Over two years ago, after pleas from her fans, Ariana Grande made a makeup tutorial and shared it on YouTube. As it turns out, the girl with the perpetually half up hair has always been a beauty maven... sort of. Her tips and tricks from the video (which Grande filmed when she was 18) aren't exactly pro-level — but that kind of makes it even better.

With her nearly constant side-eye and alleged diva-like demeanor (not to mention her numerous number one hit songs), it can be a little hard to relate to Ariana Grande a lot of the time. That's why I'm so particularly obsessed with this video — the tutorial is super straightforward and lacks any confusing expert technique. Recreating Grande's daily look isn't an aspirational goal. You too can spread concealer with your fingertips, poke yourself in the eye with some liner, and struggle with blending your foundation down onto your neck.

Below, I've pulled some of the best moments from Ariana Grande's very first YouTube tutorial. Gather up your false lashes and lip liner, and get ready to make yourself look not like yourself. Oh, and don't forget to practice posing from your left side only.

Grande starts the video by telling fans "the object is to make yourself look not like yourself. Yep." So, we're off to a good start. But I think we can all agree makeupless Grande is just as adorable. She goes on to explain her foundation application, which involves using her hands than wiping them on the nearest article of used clothing. Or a rug. Don't worry, she applied a thick layer of moisturizer first.

Reminding us that makeup should be fun and not a "to-do" item, Grande makes sure she colors in all of the lines... of her face. And finishes with a lovely sigh.

3. "These Sicilian/Italian eyes I was blessed with."

Grande was already wearing the same lashes she wore the day before while filming Victorious, but she still recommends that her fans apply their fake lashes first. She at least acknowledges that nobody else would suggest that, but she doesn't use a lot of powder so it never gets in her lashes. She finishes this section by clearly stating "I told you, this was going to be the worst makeup tutorial ever because I do my makeup completely wrong."

4. "Make sure you get your necklines. Well, all lines."

One thing Grande did right in her video: contoured like a pro. From getting those hard to remember places to that duck face, she actually did do a good job.

In her own makeup routine, apparently Grande doesn't wear eyeshadow. She just lets "the darkness of her tired eyes" be the shadow. So it makes sense that she struggled a little bit adding the proper amount of shadow. I will say, once she put it on, her eyes really did stand out more.

Many times in her tutorial, Grande lets out this throat gurgling sigh that I am all to familiar with when I put on makeup. It happened a lot when she was applying her Urban Decay eyeliner to only her inner bottom lid. Look, she even got close so we can see better.

7. "Eyelash is the most important to me."

What's great here is that she remembered her bottom lashes. And proved, by applying 12387346 strokes, that eyelash really is the most important to her.

The duck face comes back so she can best see her cheekbones. And I actually might copy that one...

Literally on her lips. Not just the line. That mirror goes up as she's applying. And when it's lowered, her lips are a completely different color.

But don't trust me to break down all of her tips for you. This is something you need to see for yourself:

More like this
"Transparent Eyeliner" Is The Perfect Summer Look For Makeup Minimalists
By Olivia Rose Ferreiro
White Eyeliner Dots Are The Cutest Summer Makeup Trend On TikTok
By Olivia Rose Ferreiro
12 Of Halsey's Makeup Looks That Are True Works Of Art
By Paris Giles
What Is Ariana Grande's Net Worth? When It Comes To Money, She Has No “Problem”
By Hugh McIntyre
Get Even More From Bustle — Sign Up For The Newsletter