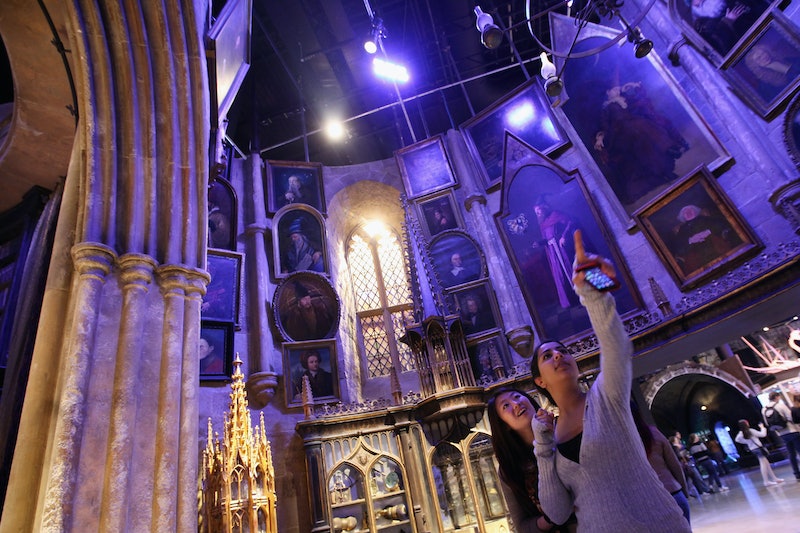 If you can solve the ninth day of Pottermore Christmas riddle, there is a handful of magical objects waiting for you to collect — a winged catapult, school trophies, a fanged Frisbee, loads and loads of books, and a knight's helmet, at least. Some Harry Potter readers with sharper eyes (they're probably the Ravenclaws) have spotted a diadem. But still, we're all anxiously waiting for some new J.K. Rowling writing — and yes, I realize we are starting to sound like a broken record.

Saturday's riddle was considerably harder than Friday's (I mean, come on, Slytherin?), but still devoted Harry Potter readers should come to the answer without too much struggle.

There's a secret room used by Dumbledore's Army,Concealed opposite the tapestry of Barnabas the Barmy,But what do students call this mysterious placeThat on the Maruder's Map leaves no trace?

Dumbledore's Army was created by Harry, Ron Weasley, and Hermione Granger to teach their peers at Hogwarts Defence Against the Dark Arts, after one of our favorite villains we love to hate, Dolores Umbridge, refused to teach it. It was disbanded when Severus Snape was tapped to teach it instead. Riddle answer spoiler ahead! Dumbledore's Army met in the Room of Requirement, also known as the Come and Go Room, a hidden room at Hogwarts that only appeared when it was truly needed.

The room has been used for some other major elements of the series: Harry and Ginny hiding the Advanced Potion Making textbook and Draco Malfoy bringing the Death Eaters into Hogwarts, for two.

After answering the riddle correctly, readers are transported into The Room of Hidden Things, a version of the Room of Requirement, right after Harry's dispute with Draco from Harry Potter and the Half-Blood Prince, when Harry is hiding the textbook from Draco. If you hover over various objects, you can collect them for use on Pottermore until your status bar is filled up. All I'm left with thinking is boy, this would be a whole lot cooler if I could actually explore a room like this is real life.

More like this
10 Must-Read New Books Out This Week
By K.W. Colyard
16 Novels That Paint A Realistic Portrait Of Abortion
By K.W. Colyard
At 14, Jenny Han Wrote Rom-Coms About Her Friends & Fan Mail To Leo DiCaprio
By Alyssa Lapid
Side Character Energy Has Arrived — Here’s What That Means
By Sophie McEvoy
Get Even More From Bustle — Sign Up For The Newsletter