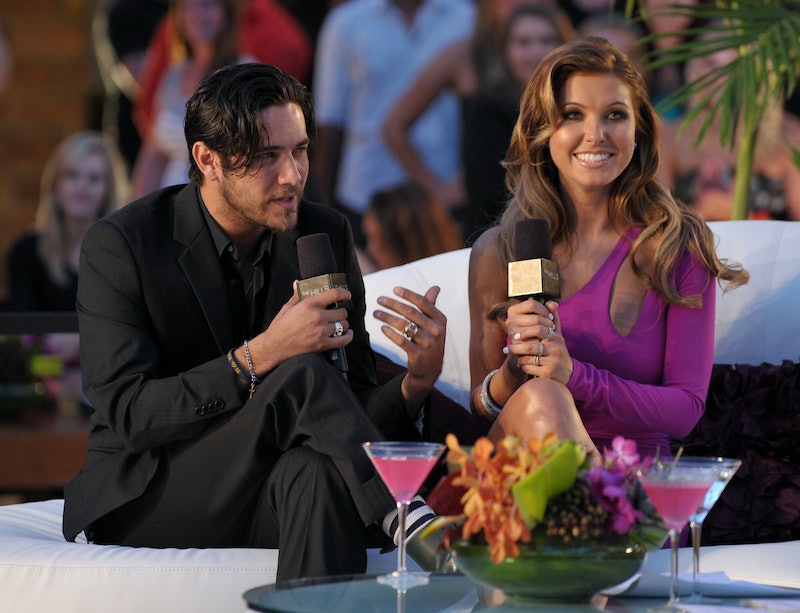 One of my absolute favorite things in the world is MTV's not exactly "real" reality show The Hills, so naturally I was thrilled when Justin Brescia a.k.a. Justin Bobby a.k.a. "a man so great he needed two names" stopped by the Bustle office to talk with me about what he's been up to since the MTV series ended in 2010. Audrina Patridge's beau was one of the most intriguing characters on the reality series, and ironically, it may have been Brescia's desire for privacy that actually made him all the more fascinating to viewers, especially when it comes to that odd moniker. But don't worry guys, we now know the truth — Brescia admits that "Justin Bobby" was never supposed to be a thing at all... and that it all came about due to a slip-up by Patridge.

"I knew Audrina before the show, she worked at [a studio] where we were doing hair for a music video. She knew me as Justin Brescia. When she asked me to film [The Hills] I said that I didn't want my birth name on the show. [I told her] let's just say Bobby, because my middle name is Robert."

"Audrina was saying Bobby for a while, and I was like thank you, I appreciate it. Then she started slipping and saying Justin."

Which, obviously, confused just about everyone.

"So then we start doing takes, and [the producers] hear on the walkies, Justin, Bobby, Justin Bobby, and they're like... 'who the f*ck are we talking to?'"

Brescia laughs, recounting the scene that gave him his accidental stage name: "Then it got back to the girls [on the show] who realized that, well, we don't know what his actual name is. And that's how it all started."

And, of course, gave us this amazing Hills moment:

More like this
'The Undeclared War' Spotlights The Real-Life Threat Of Cyber Attacks
By Maxine Harrison
18 Unanswered Questions From 'The Hills' That Still Haunt Us Today
By Ivana Rihter
“The Door Is Always Open” For Another 'Breaking Bad' Spin-Off, Says AMC Boss
By El Hunt
Emma Thompson, Lashana Lynch, & Stephen Graham Lead Netflix’s 'Matilda'
By Sophie McEvoy
Get Even More From Bustle — Sign Up For The Newsletter