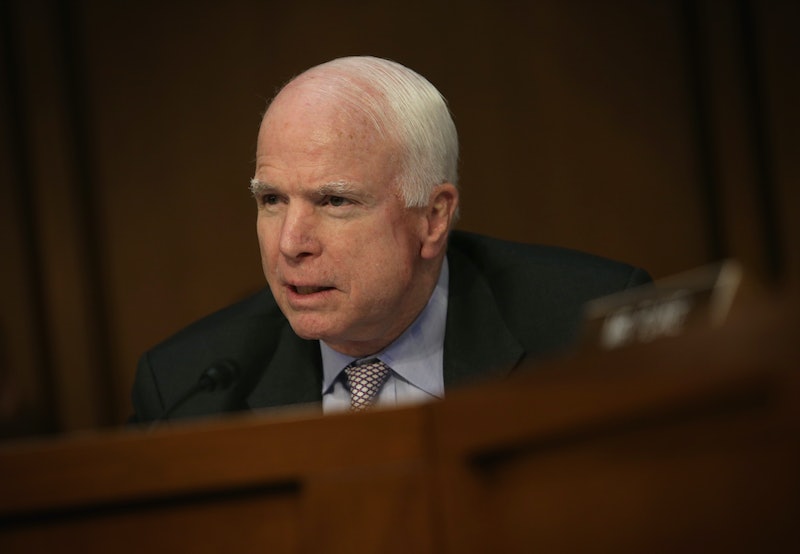 When hackers under North Korea targeted Sony Pictures Entertainment for a planned release of The Interview — a film featuring Seth Rogen and James Franco as two men assassinating the countries leader Kim Jong Un — they published private emails and threatened violence against anyone planning to see the movie. Ultimately, this led to Sony being forced to cancel the film’s premiere as theaters nationwide began refusing to screen it for fear of moviegoers being harmed, and President Barack Obama condemning the attack as “cyber vandalism.” Now, Sen. John McCain (R-Arizona) is calling the Sony hacks warfare, disagreeing with the president’s statement, saying the hacks are so much more than vandalism.

“The president does not understand that this is… a manifestation of a new form of warfare,” McCain said to Candy Crowley on CNN’s State of the Union. “When you destroy economies, when you are able to impose censorship on the world and especially the United States of America it’s more than vandalism.”

Earlier this week, Obama not only encouraged the public to continue to go to the movies without concern about terrorist attacks, but also announced that he felt Sony had made a mistake for “giving in to blackmail.” Meanwhile, as the president discusses how these acts are censoring our rights and freedom of speech, it seems that Sen. McCain wants us to react to North Korea in a more aggressive way.

“It’s a new form of warfare that we’re involved in and we need to react and react vigorously, including reimposing sanctions that were lifted under the Bush administration, including other actions and that will squeeze them for economically,” McCain said. “But most of all, we have to work together with the President and the Congress to come up with counters and abilities to respond, but more importantly to prevent.”

More like this
Why Eurovision 2023's Host City Won’t Be Revealed For A While Yet
By Sam Ramsden and Rachel Mantock
13 Photos Of Princess Charlotte Loving The Commonwealth Games
By Sam Rogers
What's New On Netflix: A Third '365 Days' Movie & Lili Reinhart’s New Film
By Arya Roshanian
Twitter Is At Odds Over Taylor Swift’s Possible ‘All Too Well’ Oscar Run
By Brad Witter
Get Even More From Bustle — Sign Up For The Newsletter