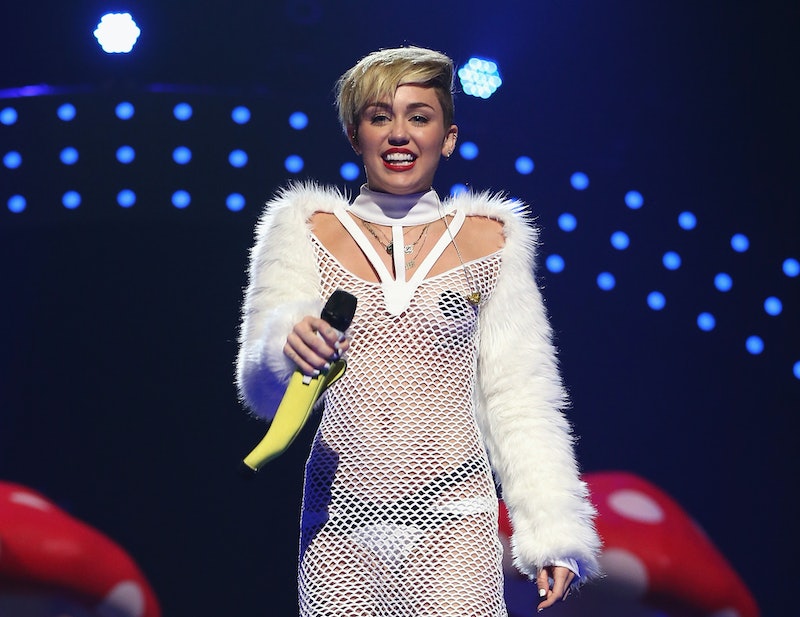 We've already talked about Miley Cyrus' emotional moment at the iHeart Radio festival in Las Vegas this weekend, but what many people are still buzzing about is her outfit: Cyrus wore a white mesh number, completely see-through, with panties and pasties clearly visible underneath. This has the prerequisite "Miley is destroying the world!" cries echoing up from their comfortable place on the Decrying Miley Couch, but it got us thinking: Are Cyrus' recent antics really that exciting?

Cyrus is far from the first pop star or starlet to go the risque route — let alone the first one to get slammed for destroying America's youth — and as fashion bloggers Tom and Lorenzo pointed out in a recent critique of the outfit, "Once Madonna all but fingered herself on live television thirty years ago, the outrage over young ladystars getting a little raunchy just gets harder and harder to maintain."And it's true: Cyrus is far from the first, and she is certainly far from the last. The fact that Cyrus used to strut for Disney doesn't make her current sexualization any more original or interesting; if anything, it makes her path even more well-traveled. For a certain subset of young pop stars and starlets, the risqué-route is a way to either keep themselves in the limelight or to launch themselves there in the first place. Remember Rose McGowan's mesh outfit from the 1998 VMAs? She was much more naked in that one than Cyrus, and she certainly wasn't the first (or last) to employ shock in her favor. Lest we all forget, Christina Aguilera literally went by X-Tina for a while (it's still her twitter handle). Assless chaps were involved. As Tom and Lorenzo ended their critique (which you should go read), "If you’re going to lift your skirt and pee all over convention, for god’s sake wear an interesting f***ing skirt."Cyrus is hardly breaking new ground with her twerking and her frequent near-nudity. In fact, she's walking in the well-worn-in treads of a very old trope.