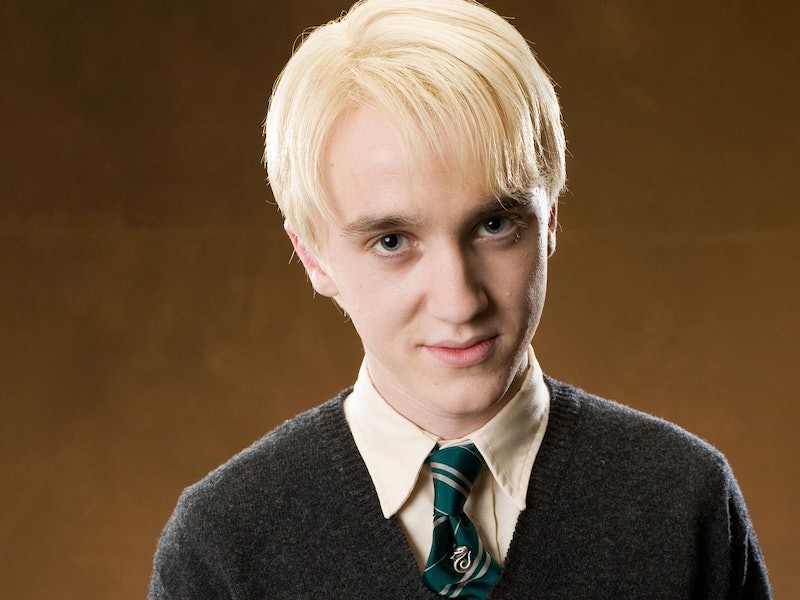 Bad news for all the Draco Malfoy fans out there in the world — it seems that J.K. Rowling is not among you. In a new piece on Pottermore, J.K. Rowling reveals she doesn't approve of Draco Malfoy crushes. In fact, she says, she is "unnerved ... by the number of girls who fell for this particular fictional character." In other words, she probably disapproves of your fan fiction in which you and Draco wind up on a beach somewhere sipping butter beer.

The new material, released as part of the 12 Days of Pottermore, is lengthy and provides a lot of insight into Draco Malfoy as a character. Rowling summarizes more or less the entire Harry Potter series from Draco Malfoy's perspective, from his time growing up surrounded by regret that Voldemort had been defeated to his eventual marriage to fellow pure blood Astoria Greenglass. However, in a separate piece also released on the site, Rowling also makes it clear that though she might "pity" dear Draco, she still considers him a character of "dubious morality" — though she says she does understand the appeal of Tom Felton, who played Draco in the films and who she reports is "ironically, is about the nicest person you could meet."

Still, Rowling makes it pretty clear that she doesn't approve of all the people who seem to think that Draco Malfoy is secretly a good person. Although she says that she believes there is "some unextinguished good at the heart of Draco" and that she has hopes he will prove to be a good parents and raise his son to be more tolerant, that whole "dubious morality" label still applies. "Draco was not concealing a heart of gold under all that sneering and prejudice," Rowling informs us, adding "and no, he and Harry were not destined to end up best friends."

In other words, Draco Malfoy really is, in his creator's estimation, the petty, spoiled, vindictive, bullying little twit we met in the first book.

Of course, this whole thing raises interesting question about the nature of authorial intent and how much it really matters. Although I definitely see Rowling's point about Draco never truly overcoming his upbringing, I also understand why fans have their own interpretations of the character. Draco is written as a complex character, one who did not have the most supportive or nurturing upbringing, and it's easy to see how fans could imagine an alternate series of events in which Draco becomes not just a sympathetic bad guy or the lesser of many evils, but an actual good guy. The potential for a redemptive arc is there, whether Rowling meant for it to be or not. Draco never lives up to that potential, but that doesn't mean fans can't imagine "What if?"

Overall, it's fascinating to get to read a little more about what the events in the Harry Potter series would have looked like to Draco, and Rowling's perspective is certainly interesting as well. But I'd say that anyone who likes their version of Draco Malfoy, the one where he rises above and becomes a decent person, ought to be free to keep that, too. And though I agree with Rowling's opinion that romanticizing bad boys and villains isn't always the best idea, anyone who wants to have a thing for fictional bad person shouldn't feel bad about that either.

In other words, the Drake-O Malfoy Instagram thing is still totally a-OK. Hooray!