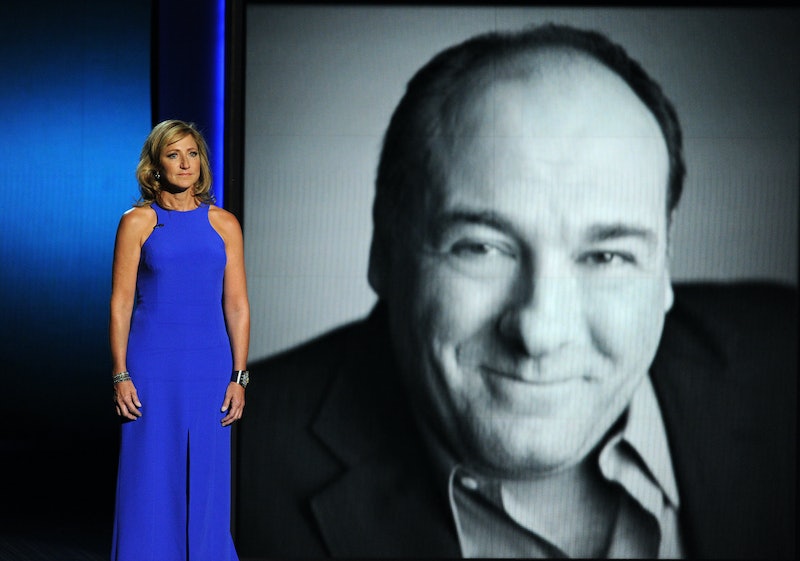 Throughout the night, the 2013 Emmy awards were punctuated by tributes to the TV stars that passed away this year. And following the beautiful tributes to Jean Stapleton, Gary David Goldberg, Jonathan Winters, and Cory Monteith came Edie Falco's honoring of her Soprano's co-star, onscreen husband, and real-life friend, James Gandolfini.

It's safe to assume there wasn't a dry eye in the house by the time Falco finished speaking. Against a backdrop of black and white photos of the actor, she spoke about what Gandolfini was like behind the scenes, since, as she said, "When you see really great art you can sometimes forget that behind it is a person with technique and skill, for sure, with an instinct, a perspective that is distinctly their own."

She then went on to list the ways that the real Gandolfini differed from his iconic character.

"He had tremendous warmth and heart, he was kind, he was uniquely generous. One got the feeling Jim was never entirely comfortable with all the attention he got. Usually because he said it every chance he got. He was far more interested in turning the light on to people he considered more worthy"

Falco ended her tribute with a heartfelt goodbye to Gandolfini.

It was a perfectly sentimental way for the Emmys to honor the man who won three Outstanding Lead Actor in a Drama Series awards during his six seasons on The Sopranos. James Gandolfini, we still miss you.