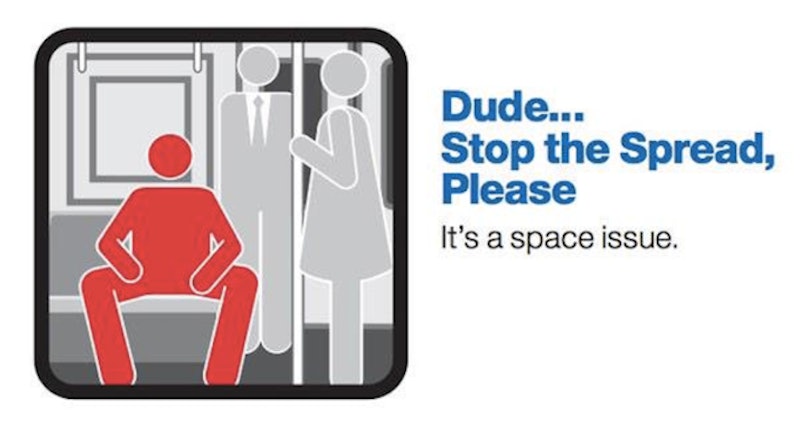 Every New Yorker has seen them — these passengers, most typically (but not exclusively) men, slouched backwards into the cold subway seat, spreading their legs so wide as if they hadn't a care in the world, taking up more space than necessary in this already too-crowded city. Now the city's transportation authority is taking matters into their own hands. Set to unveil in January, the MTA's new ads will target "manspreading," the bane of every NYC passenger, among other boorish behavior.

The new campaign, "Courtesy Counts, Manners Make a Better Ride," is the MTA's go at curbing blatant disregard for other passengers. Divided into "Do's" and "Don'ts," the new placards will serve as reminders for rider-etiquette, if you will. The "Do's" include common-sense admonitions such as offering your seat to a pregnant, elderly or disabled person and keeping your belongings to yourself.

The "Don'ts" remind people to stop their dreaded "manspreading," not to stink up the subway car with their tuna melt sandwiches (sorry, guilty as charged), and that poles are for "safety, not your latest routine," — in what could be seen as a warning for subway pole dancers (no, it's not what you think.)

The MTA press release stated that its intent with these new ads is to urge:

[C]ustomers to be aware that just a few courteous actions can make the ride more efficient while creating an atmosphere that can make a daily commute more pleasant and less stressful.

While hopefully these reminders will encourage more considerate behavior on subway rides, that the MTA is taking a stand against "manspreading" should be heartening news for many New Yorkers. A Gothamist journalist, Jake Dobkin, took to NPR to describe the affliction:

[Manspreading] is this, like, weird thing that men do where they start to spread their legs, and they can sometimes take up two or even three — if they're an exceptionally good man spreader, they can take up three seats... I'd say this is the tip of a very disgusting iceberg of bad behavior.

The act, bothersome to so many New Yorkers that it has inspired a Tumblr dedicated to posting pictures of offenders around the world, not only takes up much-appreciated seating space, it's also unsightly — I mean, guys, no one really wants the fabric stretched thin over your bumpy crotch area staring them in the face, least of all in a cramped subway car after a long day at work, ya feel?