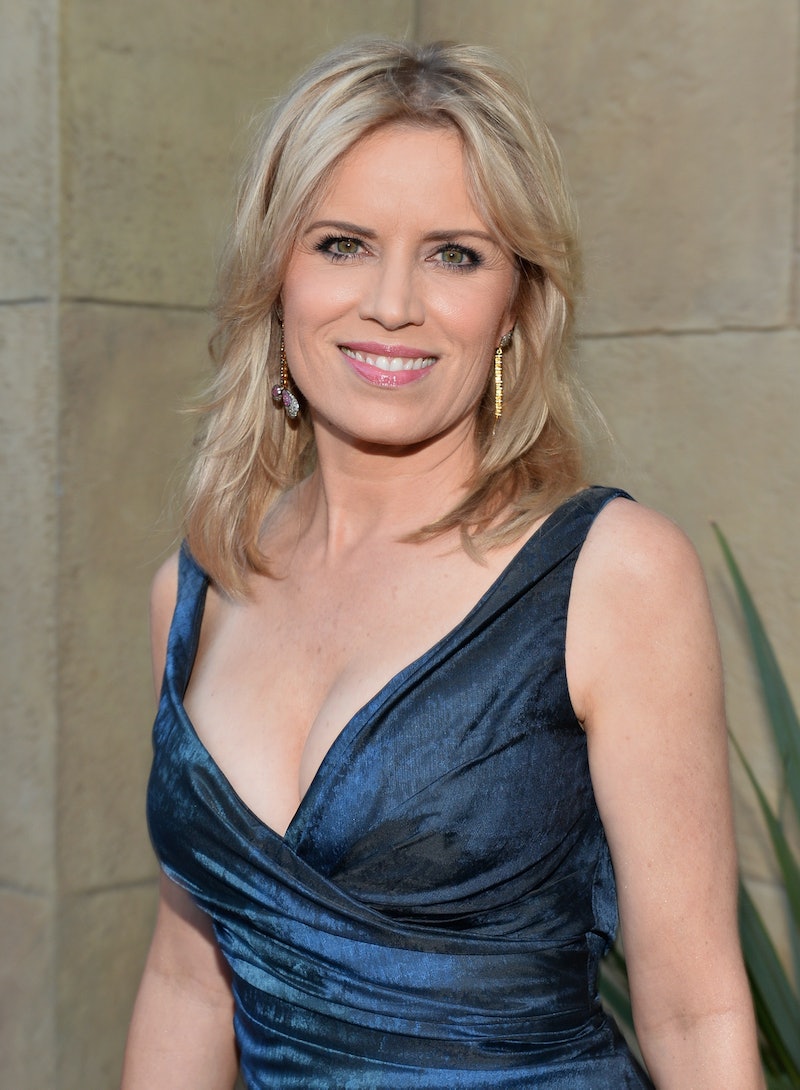 Happy early Christmas to The Walking Dead fans! Just this past week, AMC announced that their still-unnamed TWD spin-off would be set in Los Angeles, and will shine a new light on how a different city is currently handling the outbreak of the zombie apocalypse. I can't wait to see how the gritty drama will work against the backdrop of the glamorous streets of southern California, which will surely be destroyed in no time. Well, looks like the finishing touches are being put on the new cast, and it was announced Tuesday that actress Kim Dickens will be playing the female lead in The Walking Dead spin-off — currently being called Cobalt — set to begin filming in early 2015.

Dickens will be playing a guidance counselor who is in a relationship with the lead male, actor Cliff Curtis, who plays a divorced teacher. The only other news we've been given is that Dickens' character will have two children from a previous marriage and that, although she looks like the girl next door, she's got "a darkness to her, a troubled past that will come back to haunt her."

Oooh, well, I'm intrigued now. Looking into her past projects, it sure sounds like Dickens has had some practice playing roles with a touch of the dark side.

When I saw her face, I most recently remembered her as Detective Rhonda Boney in Gone Girl, the woman who wanted to find out the truth and didn't have the fondest spot for Nick Dunne. The film as a whole was dark and mysterious, and her approach to the role of Boney will definitely add an interesting dimension to character in the spin-off.

The more I looked into her past work, the more recognized that we've all definitely seen Dickens before, whether you realize it or not. I love the moments when I'm searching someone's IMDb and suddenly a light switch goes off in my head when I realize where I've seen that face. And fireworks pretty much went off in mine because she was in two of my favorite T.V. shows of all time: LOST and Friday Night Lights.

How could I forget that Dickens was Matt Saracen's mother?! She played Shelby Saracen, who walked out on Matt and his father after they divorced, leaving young Matt without any guidance as his father was in the U.S. Army. Ah, now I remember why I didn't liker her very much! But her character did make strides to rebuild their relationship towards the end of the show, and if Matt Saracen was happy, I was happy.

The actress also had a recurring role in LOST as Cassidy Phillips, a divorcee who was conned by Sawyer after she fell in love with him.

In addition to Gone Girl and these incredible shows, she's been seen recently on Sons of Anarchy and HBO's Treme, and according to her IMDb, she has an upcoming role on House of Cards. Sounds like Kim Dickens is going to have a very good 2015, so I'll just sit here and try to wait patiently for the trailer of the new Walking Dead — emphasis on try.

More like this
Idris Elba "Breaks Out" Of London In 'Luther' Film First Look
By Sam Ramsden
Yes, That's Lindsay Lohan's Sister Singing In The 'Falling For Christmas' Movie
By Radhika Menon
Keke Palmer Paid Tribute To "Other Half" Darius Daulton After Announcing Pregnancy
By Jake Viswanath
'The Holiday' Director Just Addressed *Those* Sequel Rumours
By Sam Ramsden
Get Even More From Bustle — Sign Up For The Newsletter