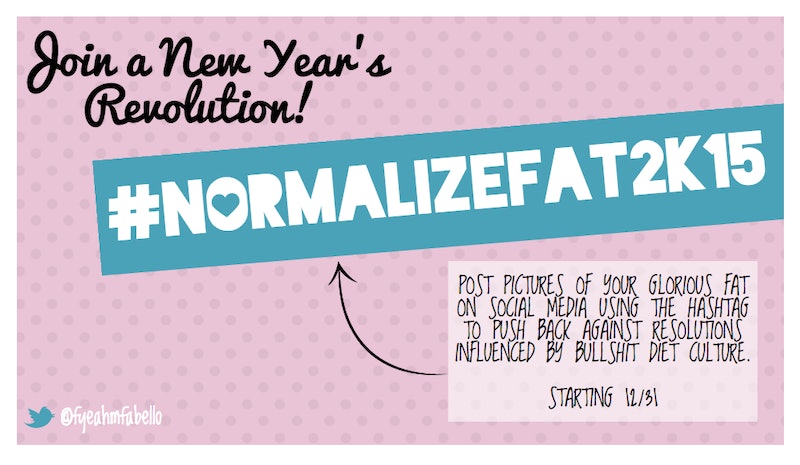 If you didn't already know this about me, I am a body positive activist. I work hard everyday trying to get people to understand that "fat" is not a bad word and that being fat shouldn't be understood as awful, or signal to others that they are free to disrespect you. One of my body positive colleagues, Melissa Fabello of Everyday Feminism is gearing up to launch a much-needed social media campaign — using the hashtag #NORMALIZEFAT2K15 to call attention to the fat hatred and weight bias still prevalent in our society.

As Fabello explains in her post about the campaign, "One of the easiest ways for an oppressive society to take hold of people is to define what's normal — and therefore, to vilify people who fall outside of that contrived definition. And in an attempt to control people's bodies — and especially those of women — society has decided that FAT = BAD." Literally, all kinds of people discuss their dissatisfaction with their bodies by referencing their bodies as "fat" — no matter what size their bodies actually are. We do this because our fat-hating culture has taught us to treat fat and fat people as abominations; but the premise is false and unkind. Fat people are human beings, and the cruelty we [as a whole] direct at fatness in others and in ourselves has to stop.

The end of the year is a tough time when it comes to understanding our bodies and body shapes as acceptable and beautiful because of New Year's resolutions. January 1st is a day inexplicably grounded in body hatred rather than self love. Particularly, if you envision your body as fat and understand fat as negative — which many do. So in order to overturn this idea, Fabello has conceived of the #NORMALIZEFAT2K15 campaign.

The campaign will begin on December 31st and Fabello hopes that people will "inundate their social media accounts — especially Twitter and Instagram — with pictures of their wonderful, glorious fat using the hashtag #NORMALIZEFAT2K15." Fabello also notes that "fat" is a term that should be defined by the participant, saying "We've all got it, so they can show us whatever they've got. Whether that means showing off a full-body pic of their wonderful fat self, making peace with their cellulite by using no filter, or showing off a close-up of their muffin top — it all works!"

Today — you can start spreading the word that this campaign is taking place, and I hope that on December 31st, you resolve to join the revolution and push back against fat shaming and fat hate, by posting a "fat" image and using the hashtag #NORMALIZEFAT2K15. If you're interested in my contributions — check out the Fattitude instagram at @fattitudethemovie.