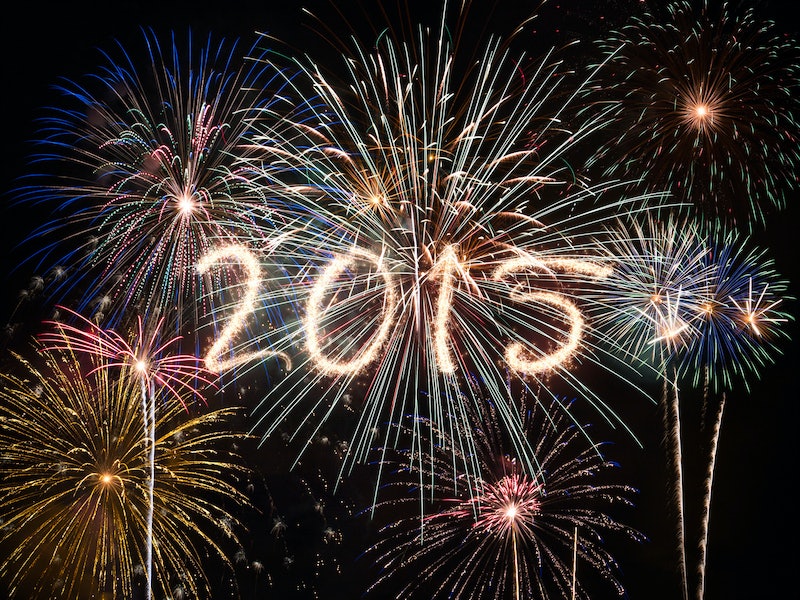 New year, new you. That's the mantra clanging around in your head as the big glowing ball drops at midnight and you're scrambling to come up with amazing New Year's resolutions, right? You have plans and goals for 2015, and you are certain every single one of them will be met by this time next year. It seems so simple, doesn't it? Make a to-do list, and you have 365 days to complete it. You make to-do lists every day at work and those get completed (for the most part), so how hard could this be? Well, let's all take a moment to admit that it's actually extremely hard.

Now, New Year's resolutions are great. They get you into a positive mindset that gives you a fresh start and a determined outlook on the shiny new year. But for most of us, that list of healthy habits and successful behaviors is completely abandoned by Valentine's Day. The problem lies with the goals themselves. If you set your sights too high, you will most likely fail, leaving you feeling defeated before the end of winter. So let's take a different approach for 2015, shall we? Let's make a list of resolutions we would make if we were totally honest with ourselves. They might not be as lofty and exciting as "get in bikini shape by the end of March," but they are much more appropriate for your busy lifestyle. They might even be a little embarrassing to share with others. But you don't have to share these with anyone, so don't stress. The most important thing — these resolutions are easy to accomplish because they aren't that far out of reach.

1. I will watch one less Real Housewives series.

OK, hear me out. These shows are trashy, mindless, and utterly fantastic. However, every interaction is laced with snark and shallowness to the point where too much exposure to these bickering broads will leave you mildly brain dead. You don't have to give them all up, because really, who could abandon the hot mess that is the RHONJ clan? But watching one less will probably make you feel a little better.

2. I will get all the deets on that major news story I haven't been following.

We've all been there. You're at a party and your friends start talking about a recent news update on a long-running story that you didn't pay much attention to in the beginning, and now you're too afraid to ask, so you smile and nod or you moonwalk backwards out of the conversation. It's cool. Now, just take the time and get yourself up-to-speed on what's going on.

3. I will reduce takeout orders to once a week.

It would be great to become a vegan, clean-eating boss lady overnight, but c'mon. There's no way that's going to happen without a few major slip-ups along the way. So take it slow. Vow to only order from Seamless or GrubHub once a week instead of whenever you feel stressed, and you will be well on your way to a healthier lifestyle.

4. I will work on breaking a nasty habit.

Notice that I said, "work on" instead of just "break." Bad habits are incredibly tough to shake, so pick one that you've been trying to break, and keep trying. Create a timeline of small steps and maybe some rewards at each major breakthrough. If you're a smoker looking to quit, pick a daily number of cigarettes you'd like to get down to, and give yourself enough time to really wean yourself down. Once you get there, #TreatYoSelf to a massage or something else that's awesome. And then set up a new goal, and so on and so on.

5. I will spend less time feeling disappointed when I look in the mirror.

Isn't it sad that it's almost natural for us to look in the mirror and feel bad about what we see? It's ridiculous and sad and far too common. Especially since the rest of our time is spent working hard and kicking ass. So this year, try looking in the mirror and verbally acknowledging one thing you see, every time. Eventually, maybe we'll all get to a point where we look in the mirror and see what everyone sees, which is a fabulous, kind-hearted boss lady.

6. I will call my parents more often.

They love you, and if they had their way, they'd hear from you three times each day. You can make the time to call at least once or twice a week.

7. I will not get sucked into another "cleanse" or crash diet.

Cleanses are bullsh**. The only clarity or enlightenment anyone gets from an extreme cleanse is actually just that hallucinatory stage that occurs post-hangry. If you're drinking a juice cleanse in addition to three balanced meals each day, then great! Juice it up. But if the juice is taking place of food, your insides will be frightened and shocked and will ultimately hate you. Just don't do it.

8. I will find a workout I don't despise.

Don't resolve to hit the gym four times a week if you hate the gym. You will be miserable, bored, and you will stop going, probably two weeks in. Find a physical activity that's actually fun, and you'll probably get in shape naturally because you're enjoying yourself.

This is just a really simple way to start the day off right. You're attacking your day with an organized, determined mindset, and might just accomplish other goals and resolutions as a result of the made bed. Just give it a try.

10. I will do one thing that takes me out of my comfort zone.

Not each day, not each week, and not each month. Fear is healthy until it keeps us from being happy. So push fear in the mud only once this year, and try something that scared you before. It might lead to more courageous activities, or it might reaffirm your fear and keep you from ever doing that thing again, but at least you gave it a shot.

If you don't want to do something, then don't do it. And learn to squash those feelings of guilt as soon as they start brewing. As women, we often want to fix the problems of others, while putting our needs last. While it's nice being nice, it's also nice being happy. So when someone asks for a favor that is outside of what you deem to be reasonable, just say "no" and leave it at that.

12. I will take the time to Netflix (insert popular show you haven't seen here).

I suppose most people will resolve to watch less TV every year, but why? For me, brilliantly written plot lines and creative TV twists have only expanded my imagination. So ignore the TV haters and instead, resolve to get into Breaking Bad or The West Wing or Friday Night Lights. Any hit TV show that is available to stream and that you can willfully get sucked deep into.

There's a lot of pressure to be out on the weekends. Happy Hour on Friday, then out to the club, then brunch on Saturday, then to the beach, then to the mall, then to the movies, then out for dinner and drinks, and then to the farmer's market on Sunday and then out for a leisurely Sunday Funday. But..... your couch. It's so comfortable. And your fridge is fully stocked. And you have plenty of alcohol. And... sweatpants. SWEATPANTS. If you feel like you need a night or a weekend to recharge by seeing zero people, then do it. Everyone enjoys slothing out with sweats and junk food, so why hide it?