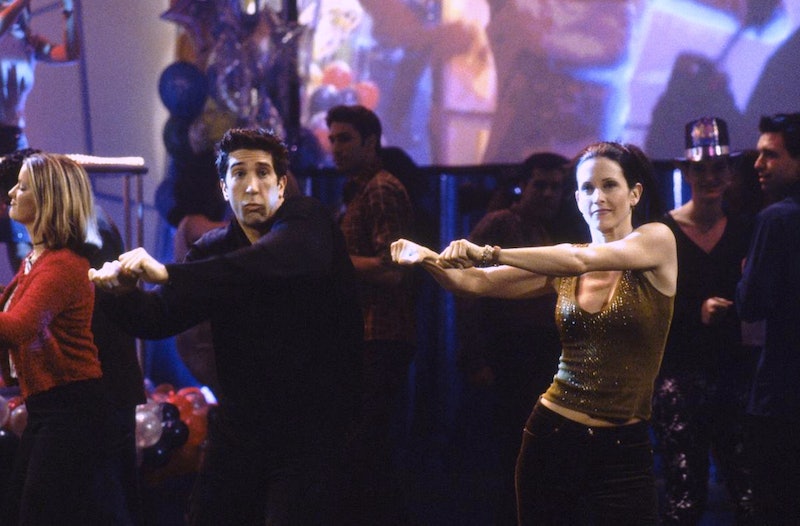 After all, it is a pretty big event — the end of one year and the beginning of another, is kind of the tops. Fresh starts and resolutions and New Year's Eve kisses all make pretty solid plot points, if you think about it. So if you're planning on ringing in 2015 with some serious chill time... or if you plan to need some while you nurse a hangover on New Year's Day, I have you covered. These are the seven best episodes of New Year's Eve-related TV ever, and since two of them are from Friends, you know this list is going to be good.

In this Season 5 episode, we're in the middle of basically every ridiculous plot point Gossip Girl tried to throw at us when the show was ending — the whole thing with Prince Louis, Dan and Blair's (admittedly adorable) budding relationship, and Chuck and Blair's disastrous car crash that nearly killed the one and only Chuck Bass. But it's New Year's Eve, so everyone's going to the Spectator's New Year's Eve party, and that's basically where everything goes wrong. Serena kisses Dan at midnight, and it breaks my heart every time.

This episode doesn't exactly take place on New Year's Eve, but it does happen after the fact, and Pam's failed resolution board will prove that to you. Another highlight: Michael waiting to find out if Holly's ultimatum to her boyfriend, AJ, ended their relationship or not. If seeing Michael Scott dance around to Kelly Clarkson's "My Life Would Suck Without You" isn't enough for you, I'm not sure what is.

5: Friends, "The One With All The Resolutions"

It's New Year's Eve, and the Friends gang is all making resolutions, and throughout the rest of the episode, you basically get to see them fail at all of them, especially Chandler, who vows not to make fun of his friends anymore. My favorite part has nothing to do with New Year's, though: Remember when Ross went to the bathroom while wearing his leather pants on a date and sweat so much he couldn't get them back up his legs? What am I saying? Of course you do.

When it's impossible to get any kind of transportation on New Year's Eve to the party they're headed to, Cory, Shawn, Topanga, Eric, and Eric's supermodel date Rebecca Alexa have to resort to using the subway. Of course, the subway breaks down, and although Eric totally freaks out, everybody does their best to make the best of the situation — especially Shawn, who manages to find caterers in an adjoining car. They end up counting down to midnight on the train, and make New Year's Eve on a subway car seem way more appealing than it ever would be in real life.

Ah, Season 1: the time before the series finale shattered my heart into a million pieces and made me never want to watch one of my favorite shows ever again. In this episode, Ted, Marshall, Lily, and Barney rent a limo to get them to a bunch of different New Year's Eve parties, and eventually run into Moby... only to find out that he's not Moby at all and is actually a crazy gunman. Also important: Barney makes a "Get Psyched" mixed CD, which is an essential for any New Year's Eve.

Any true fan of The OC (i.e., anyone who still watches it on a regular basis as I do, despite the fact that it ended several years ago) is aware that the first season is the best, and that includes "The Comeback." Marissa tells Ryan she loves him, and he's caught totally off guard, so he says "thank you." And unfortunately, he doesn't realize that he loves her, too, until it's almost too late. Just before midnight, Ryan manages to make it to crazy Oliver's New Year's Eve party to kiss her in time to welcome in 2004. And it's set the standard for any and all New Year's Eves I've had since.

1: Friends, "The One With The Routine"

When Monica and Ross manage to score a once in a lifetime opportunity to be party people on Dick Clark's Rockin' New Year's Eve, there's only one way to get up on those coveted platform: Doing the routine they performed in their eighth grade talent show. Obviously, it's amazing, just not in the way that Monica and Ross had hoped. Also on the dance floor, Joey tries to work up the nerve to kiss his hot dancer roommate, Janine as a way of confessing his feelings to her at the show's fake midnight, but she beats him to the punch.