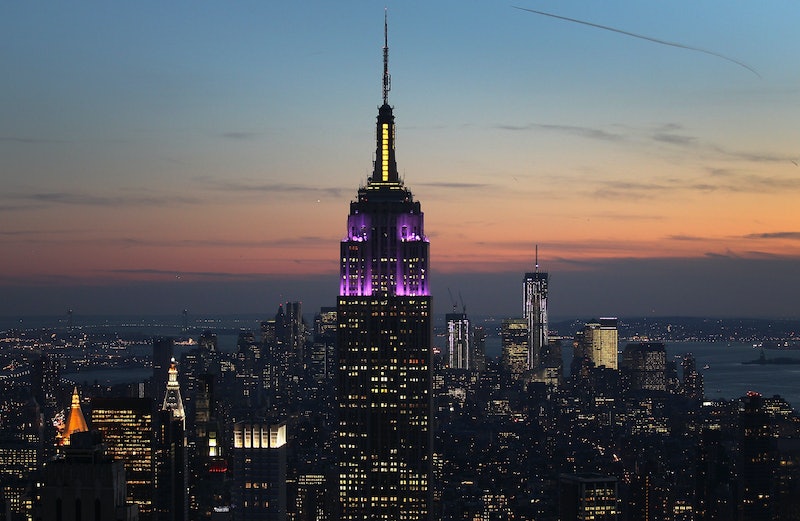 The City That Never Sleeps. The Big Apple. Hong Kong on the Hudson. Is there any place more beautiful than New York City? Unlikely, and most New Yorkers would agree. After all, with the skyrocketing home prices, packed public transportation, and harsh weather, you really have to love it to want to live here. New Yorkers are a special breed for this very reason, and I think it’s fair to say the city somewhat defines those who live in it. And when it comes time for thinking up New Year's resolutions for New Yorkers, well, we all certainly have plenty to choose from.

So what exactly can New Yorkers work on doing better? After all, they say if you’ve made it in New York City, you can make it anywhere, and maybe they’re right — but that doesn’t mean that you can’t improve upon your current situation in The City So Nice They Named It Twice. (I know, I’m having too much fun throwing out NYC nicknames.) Sometimes, a big change can arise from learning to see your own world differently, and that’s just what many New Yorkers need to do. So whether you're planning to explore new boroughs this year, see more museums, or simply be nicer to tourists, here are a few resolutions to keep in mind going in to 2015.

1. Get out of your borough

When’s the last time you saw your friend who moved to Queens? How about the last time you went to that great restaurant in Brooklyn? The problem with having different boroughs is that you often just want to stay in your own. For shame. Every part of New York has its own qualities to offer, so get out of your comfort zone and take the 30 minute voyage to a new part of town. New York may be big, but that's what makes it wonderful. Don’t miss out on the cool things that exist just outside of your home radius.

New York was built on mom and pop shops, and that’s one of the reasons it has so much personality. However, with the incoming chains and rising real estate prices, many of the independent business owners are being forced from their roots. That’s just not cool. Next time you need to buy a tube of toothpaste, skip over the Duane Reade and go to the independent pharmacy down the street instead. It may not be much, but if everyone did a little, it would mean a whole lot.

Maybe you do this already... but maybe you don’t. And if you don’t? You’re really missing out. A taxi ride can be quick and convenient, but the subway system in New York truly is the heart of this pulsating city. Not to mention, thanks to its genius layout, you can get just about anywhere for $2.50. Go to Los Angeles, go to San Francisco, go to Boston, and realize just how great your public transportation here really is.

Every New Yorker has his or her favorite park, and that’s a wonderful thing. There’s nothing like visiting “your park” on the regular and watching it change throughout the seasons. However, as lovely as your park may be, the truth of the matter is that New York is filled with beautiful parks. In fact, for being a metropolitan center, NYC has really got it going on when it comes to the greenery and public spaces. Central Park and Prospect Park are breathtaking, but so are Hudson River Park, Brooklyn Bridge Park, Inwood Hill Park, Fort Greene Park... the list goes on.

So you’ve been to the MoMA, the Met, and the Guggenheim before. Go again. And again. The thing about New York’s museums are that they aren’t just one-stop shops. The amount of art that they hold is enormous and constantly changing. Purchase a yearly pass and actually use it. You’re in a city that lives, breathes, and influences art and culture — make the most of it.

6. Quit complaining about tourists and transplants

I get it — tourists can be annoying. People holding up their cameras every three blocks is a pain in the ass, and it sucks when you miss that late night A train because somebody in front of you doesn’t know how to swipe his subway card in one go. That being said, you’re in a compacted city that thrives on tourism and new, young transplants… stuff like that is going to happen, regularly. Accept it. After all, New York wouldn’t be New York without the thousands of bodies bustling in and out of it every month, and that is inclusive of people who haven’t lived there their entire lives.

7. Stop being so jaded

New Yorkers, you guys are awesome. But you’re also just so damn jaded. You live in the most amazing city in America, so try to remember that from time to time. Visit the landmarks, take the tours, and don’t be too cool to look up from your newspaper when the subway is crossing over the Manhattan bridge. If the cityscape ever gets boring, it’s time to reevaluate your perspective.

More like this
Why Experts Say Sleeping With A Fan On Isn’t Totally Risk-Free
By Sophie McEvoy
The 6 Best UV Umbrellas, According To A Dermatologist
By Rachael Green
The 8 Best Indoor Door Mats For Your Home
By Jenny White
Expert-Approved Hacks For Packing A Carry On
By Jessica Goodman
Get Even More From Bustle — Sign Up For The Newsletter