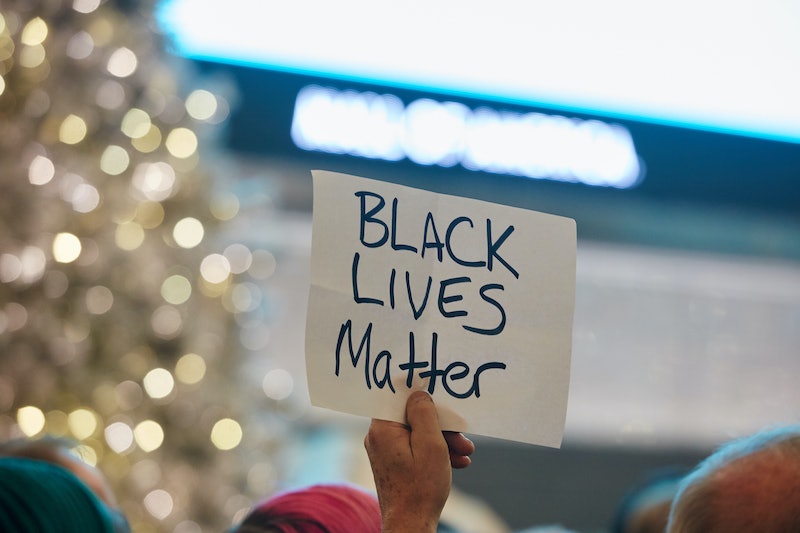 The ongoing civil unrest from Ferguson, Missouri, to the streets of New York City has created a divide between protesters and law enforcement agencies, making it seem like it's impossible for the two groups to coexist. But if there's one city in the United States that's not collapsing under the strained relations between police officers and demonstrating citizens, it's Nashville. In a public end-of-the-year address to his employee, Nashville Police Chief Steve Anderson defended the Ferguson protests and the ways in which his officers were responding to the peaceful demonstrations — all the while telling off a disgruntled and disgusted Nashville resident.

According to The Tennessean, Anderson initially posted his letter to the police force on the Nashville and Davidson County website. Anderson started off by thanking his officers, showing much admiration and respect for the ways in which his police force has handled the ongoing Ferguson and Black Lives Matter protests in the city:

Over the last weeks, across the nation, and here in Nashville, we have witnessed many protests and demonstrations. Some of the demonstrations have been peaceful. Some have been violent, with significant property damage. Here in Nashville, persons have gathered to express their thoughts in a non-violent manner. I thank all involved for the peaceful manner in which they have conducted themselves.

I also thank you. As a member of the Metropolitan Nashville Police Department, you have responded to these events in a manner that clearly shows that this is a professional police department staffed by professional individuals who respect the points of view of all persons. Again, thank you for showing the Nashville public that, individually and collectively, they have a police department they can be proud of.

The police chief assured his department that Nashville residents were "overwhelmingly...supportive of your actions." However, Anderson said there's a fringe opposition group — a small yet vocal minority — who aren't too happy with the Nashville PD's efforts to protect free speech and the right to lawfully assembly.

In case anyone needed an example of the attitudes of the vocal minority, Anderson then posted a critical email he received from a Nashville resident angered by the fact that police officers served protesters hot chocolate and let them march, lawfully, throughout the metropolitan area. "It sends a message that they can do whatever they want and will be rewarded," the email read. "How long are we going to allow these people to disrupt our city?"

Anderson's response? This isn't about you, and your views, while valid, do not reflect those of the city and its residents. "While I don’t doubt that you sincerely believe that your thoughts represent the majority of citizens," Anderson wrote in an email reply, "I would ask you to consider the following before you chisel those thoughts in stone."

As imperfect humans, we have a tendency to limit our association with other persons to those persons who are most like us. Unfortunately, there is even more of a human tendency to stay within our comfort zone by further narrowing those associations to those persons who share our thoughts and opinions. By doing this we can avoid giving consideration to thoughts and ideas different than our own. This would make us uncomfortable. By considering only the thoughts and ideas we are in agreement with, we stay in our comfort zone. Our own biases get reinforced and reflected back at us leaving no room for any opinion but our own. By doing this, we often convince ourselves that the majority of the world shares opinion and that anyone with another opinion is, obviously, wrong.

It is only when we go outside that comfort zone, and subject ourselves to the discomfort of considering thoughts we don’t agree with, that we can make an informed judgment on any matter. We can still disagree and maintain our opinions, but we can now do so knowing that the issue has been given consideration from all four sides. Or, if we truly give fair consideration to all points of view, we may need to swallow our pride and amend our original thoughts.

And, it is only by giving consideration to the thoughts of all persons, even those that disagree with us, that we can have an understanding as to what constitutes a majority.

Owned? I would say so. But Anderson didn't stop there, continuing to dole out some harsh yet delicately worded realities to the angry letter writer. He reminds the letter writer that "police are merely a representative of a government formed by the people for the people," so we shouldn't instill our children with an overwhelmingly sense of fear for those authority officials in blue.