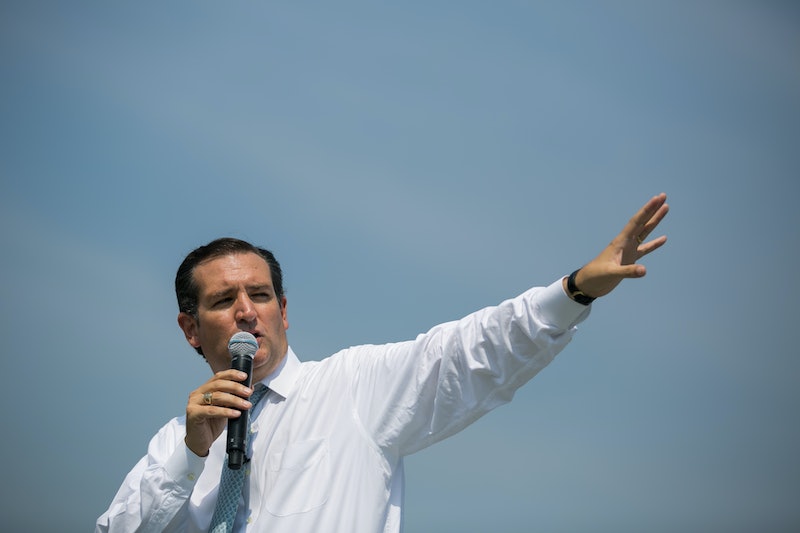 Senator Ted Cruz has received a lot of media attention recently, and it's not difficult to pinpoint what is so fascinating about the first-term junior senator from Texas.

Cruz has maintained the same, unaltered far right worldview since arriving at Princeton as an undergrad — as a former classmate points out, an Ivy League education, Harvard Law and life experience have done nothing to alter any of the fundamental beliefs he held as a 17-year-old. What's more is that Cruz is shameless and unwavering in the conviction that he is consistently the smartest, most correct person in any room, or, you know, the entirety of the nation's capital.

Add to the mix the liberal aversion much of the media feels toward Cruz's dearly-held ideals, as well as the fact that the senator could have a shot at being the next president of the United States, and the equation produces insightful articles that are equal parts amusing and horrifying, like the Daily Beast 's roommate and classmate interview piece and GQ 's Monday profile.

We decided to take a look at some of the most telling Cruz quotes, straight from the senator himself in the past couple weeks.

From Cruz's Sept. 11 foreign policy speech at the Heritage Foundation:

From the Fox News interview in which Fox's Chris Wallace basically told Cruz his plan to defund Obamacare won't work.

And what do others have to say about Cruz? Although it might not be the most indicative of his political prowess, the Daily Beast reporter who surveyed Cruz's Princeton classmates found that four independently used the word "creepy" to describe the senator, with some pointing to his habit of donning a paisley bathrobe and walking to the end of the dorm's hallway where female students lived.

“I would end up fielding the [girls’] complaints: 'Could you please keep your roommate out of our hallway?'" Cruz's former roommate said to the Beast regarding the man who could be the next POTUS.