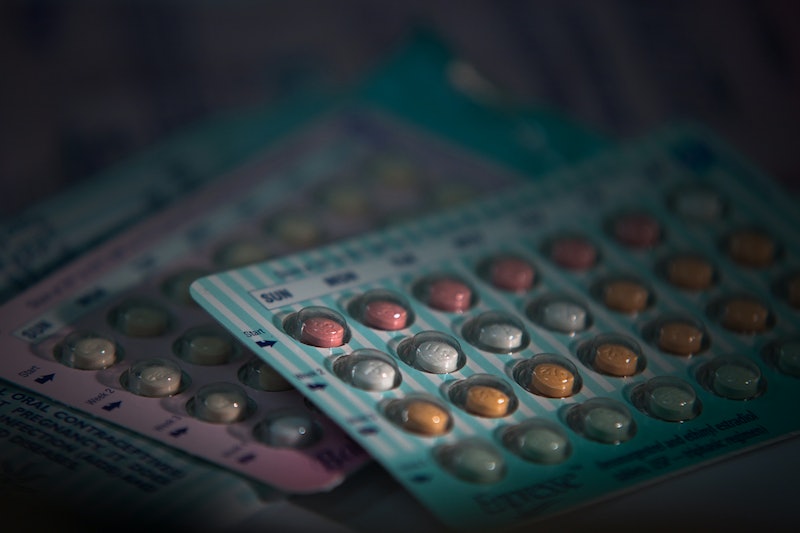 We're now entering 2015, but when it comes to the discussion of birth control in the United States, it may as well be 1964. We don't have to go to the lengths that Peggy Olson did on Mad Men to receive our monthly dosage of The Pill, but there's still a suspicious amount of policy makers and thought leaders hell-bent on making contraception-seeking women jump over bureaucratic and economic hurdles. Nearly 50 years after Griswold v. Connecticut struck down anti-contraception laws, those little pills and IUDs still trigger debate from the pews of your parish to the halls of the Supreme Court. After all, this was the year in which the Supreme Court ruled a closely held company can deny birth control coverage to its employees because of the company's religious beliefs — with no regard to the religious beliefs of its female employees. As policy makers have discovered with abortion, you can't outright ban birth control, but you can push it to the fringe.

Here's a look at the biggest birth control news stories of 2014...

Hobby Lobby has been popping up on a lot of these year-end lists — with good reason. The landmark Supreme Court case, which was centered around the IUD and emergency contraception such as the morning-after pill, was a defining moment for birth control in America. Months later, the bleak precedent it propelled has fully crystallized: A company's owner's "religious freedom" trumps an employee's right to choose a form of health care.

Or, how Justice Ruth Bader Ginsburg put it in her sharply worded dissent: "The exemption sought by Hobby Lobby and Conestoga ... would deny legions of women who do not hold their employers' beliefs access to contraception coverage."

At first, pundits believed the outrage in response to the Hobby Lobby decision was overstated, but that changed quickly when the Supreme Court broaden the ruling from applying to just four types of contraception to all types of birth control, including The Pill, last July. More than 50 closely held companies and religiously affiliated universities had lawsuits challenging the Obama administration's birth control mandate over the summer, leaving contraception coverage for women across the country in a precarious state.

The Supreme Court even let Wheaton College, a private Christian school in Massachusetts, off the hook. Wheaton didn't just object to providing birth control coverage, but also to the accommodation, which required the university to sign off on a waiver allowing its employees and students to receive contraception coverage from a third-party insurer. Apparently, just the acknowledgement that women on your campus would be using The Pill was too much for university officials to handle.

Welcome to birth control in the age of Hobby Lobby: A "minefield" ridden with discrimination and false science.

2. The Rebirth Of The IUD

The owners of Hobby Lobby may be opposed to the IUD, but more American women are turning to the contraception that once scarred our mothers' generation. Long-acting contraception (LAC) methods such as the IUD have been making a comeback, with the rate of women using LAC devices doubling since 2010, according to a 2014 study from the Centers of Disease Control and Prevention. About 11.1 percent of American women between the ages of 25 to 34 now use a form of LAC, which tend to have a failure rate less than 1 percent. (The Guttmacher Institute places the failure rate of the IUD at 0.2 percent with both perfect and typical use.)

What's causing the rise of the IUD? The intrauterine device fell out of fashion during the 1970s due to its high risk of infections — causing 17 deaths — but medical researchers have drastically improved the contraceptive method. It's safe, effective, and works as a sort of "forget about it" contraception; instead of taking a pill at the same time each day, women can have worry-free contraception for at least five years with the IUD.

But the economical gains of the IUD may have something to do with it, too. The famously expensive contraception is now being covered by health insurance plans — unless, of course, you work for Hobby Lobby or a religious nonprofit — making it way more affordable for young and low-income women. More and more gynecologists have been recommending the IUD to their younger patients, while a 2014 study published in the New England Journal of Medicine found that teen girls were 16 times more likely to choose the IUD at no cost, resulting in lower teen pregnancy and abortion rates.

Too long, didn't read: The IUD is the birth control method of 2014.

While women have been finding success with long-acting contraception like the IUD, the "permanent birth control" Essure has come under fire for its distressing side effects. Hundreds of women came forward this year to publicly denounce the contraception method, which the company claims has a 99.8 percent success rate. Erin Brockovich — yes, she of environmental activism fame — has been leading the campaign against Essure, creating a website for women to share their stories and lobby the company and the FDA for more transparency.

I have been amazed at the number of women who have written to me with their stories and the serious medical issues they are having due to the Essure implant. Stories from debilitating headaches, nausea, allergic response to the nickel the device is made of, hysterectomies, colon perforation due to device moving, to scans that cannot even find where the device has gone to pregnancy and the women were told that they could not get pregnant yet none of the women were told of the serious side effects.

It is a woman’s right to decide for herself if she wants a certain form of birth control but when they are NOT told of the devastating side effects, well that isn’t right.

Other former Essure users have also spoken publicly about enduring excruciating chronic pain. "It felt like barbed wire inside of me," one woman told news station KNXV in October.

As the backlash against Essure picks up momentum, look out for some changes being made in 2015.

4. Coming To A Walgreens Near You

With politicians and religious leaders constantly attempting to block access to affordable birth control in America, whether by denying insurance coverage or shuttering women's health clinics in rural and low-income areas, over-the-counter birth control sounds like a dream, doesn't it? In 2014, this newfangled proposal received plenty of airtime, and both liberal and conservative pundits backed the idea.

Although doctors support OTC birth control, the American Congress of Obstetricians and Gynecologists released a statement in 2014 warning against buying into the Republican hype:

OTC availability of oral contraceptives will help more women get the contraceptives they need, which have long been proven safe enough to use without a prescription — especially emergency contraception. We feel strongly, however, that OTC access to contraceptives should be part of a broader dialogue about improving women’s health care, preventing unintended pregnancies, and increasing use of contraception, including long-acting reversible contraception (LARC). Over-the-counter access should not be used as a political tool by candidates or by elected officials.

Is prescription-free OTC birth control on the horizon, or was this just a talking point used by conservative politicians to distract from health insurance coverage and the War on Women? Only time will tell.

Politicians and craft-store owners may say they don't believe in it — and don't want to allow employees to have affordable coverage of it — but birth control is working. Period. Numerous studies released in 2014 concluded that increased access to birth control is directly responsible for the dramatically declining abortion and teen pregnancy rates. Even the American Academy of Pediatrics acknowledged the positive effect birth control has on young women, writing in a study published in the journal Pediatrics that long-acting contraception has become the "first-line contraceptive choices for adolescents."

Ultra right-wing pundits may continue to decry birth control as immoral, and Mike Huckabee may believe that women "cannot control their libido or their reproductive system without the help of the government," but those baseless accusations may soon be drowned out. American women still have uphill battles when it comes to accessing affordable contraception, but 2014 has shown that science is on their side.