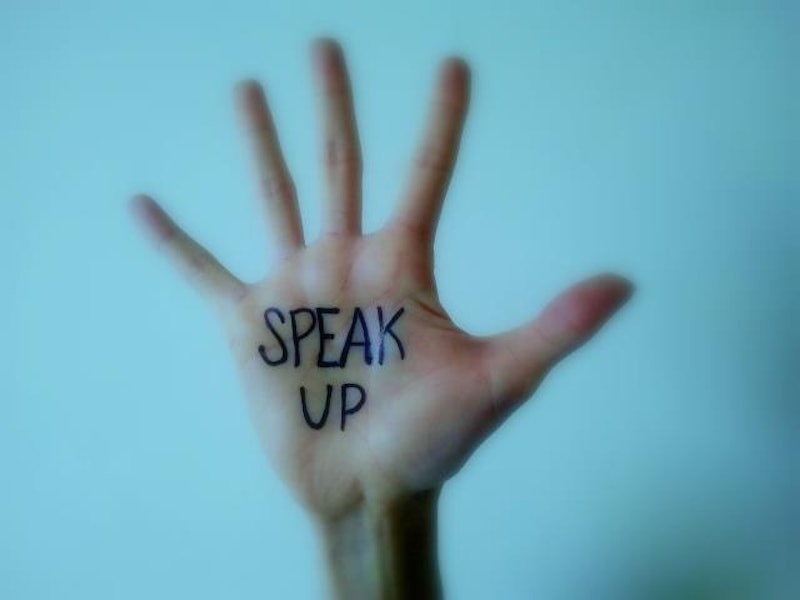 The essay isn’t new; it was first published in September of 2014. But in addition to the fact that it’s only begun making the rounds now, it’s still culturally relevant — and will continue to be so until revenge porn becomes a thing of the past. I should also take a moment to note that Holten’s essay was originally written in Danish; since I don’t speak Danish, I’ve had to rely on Google’s imperfect translation of the page to get the general gist of it [UPDATE: The essay has been translated into English here]. But it’s a powerful essay nonetheless, and it’s made even more powerful by the images which accompany it. Taken by photographer Cecilie Bødker Jensen, the pictures — beautifully shot nudes — show Holten making a statement by reclaiming her own body. Head on over to Friktion to see the photos; they're well worth it. As Holten recently told One Woman Army, “It’s still my name and it’s still my body.”

Yes. This. So much this.

Holten, now 23, has become an activist in the wake of her experiences, speaking about what it means to be a victim of revenge porn, about what governments need to understand in order to effectively legislate the issue, and more. One Woman Army spoke with Holten after a recent talk at the FemF feminist forum in Helsinki; the whole interview is definitely worth reading, but there are a number of points I find to be particularly thought-provoking. About legislation, Holten noted that something being on the Internet doesn’t make it ephemeral; on the contrary, the Internet is often forever. “That’s what a lot of legislatives don’t get,” Holten said “They’re like, ‘Oh, it’s just somewhere on the Internet.’ Do you not understand that these sites use SEO to have it be on top when you Google me? Do you not understand what that means for a person? Because I sure as fuck understand it, because it happened to me and I can tell you that it’s no fun being at a job interview and having to explain that there are naked pictures when you Google me. It’s not a joke to me.”

Whenever Holten has asked for the photographs to be taken down, she has received one of two responses, neither of which has ever been the removal of the photos in question: “Either they tell you that you’re a slut and that you shouldn’t have taken them in the first place, or they tell them that you uploaded them yourself and now you regret it,” she said. “I don’t know why that would be an excuse not to do it but for some reason there is. So there is this kind of entitlement that now that they are there, it would be absurd not to share them.” So what’s to be done about it? It starts in one place: Holding revenge porn site owners responsible for the content on their sites. “Shouldn’t it be the burden of the site owner to prove that a person is there willingly instead of the burden for me to prove that I am there unwillingly?” said Holten. “I find this to be so basic. And it should be their burden to prove that I am 18 in these pictures, which I’m not.”

The easy solution to the revenge porn epidemic — and the one that’s tossed around most frequently — is telling people, “Well, just don’t take any naked pictures, then.” But as is the case with so many other things, why is the onus placed solely on the victims to prevent crimes from happening to them? Why are we not teaching people not to commit those crimes instead? It’s the same issue we’re dealing with when women are told not to get raped or assaulted, instead of teaching people not to rape and assault in the first place; it’s the same issue we’re dealing with when girls fighting with school dress codes are told their clothing is “too distracting for the boys,” rather than teaching those boys (and all kids) that the only people responsible for keeping them focused on their lessons are themselves. The easy thing to do isn’t the same as the right thing to do — and if we’re going to make our world a better place, we need to set the easy solution aside in favor of the right solution, no matter how hard it might be.

More like this
Ben & Jerry’s & Tony’s Chocolonely Are Launching 4 Responsible New Flavours
By Sophie McEvoy
August 2022 New Moon Do’s & Don’ts
By Brittany Beringer
Your Daily Horoscope For August 18, 2022
By Alexandria Lettman
15 Matching Halloween Costumes For You & Your Dog
By Kirsten Nunez
Get Even More From Bustle — Sign Up For The Newsletter