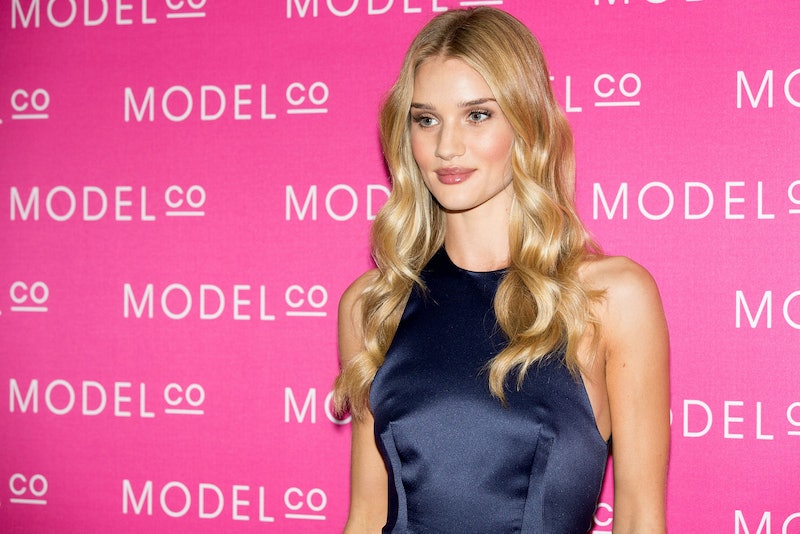 Guess which supermodel joined what I like the call the "lob" squad? According to the Daily Mail, Rosie Huntington-Whiteley cut her hair short, chopping several inches off of her long locks. While the 'do isn't particularly original — every celebrity and their mother got a lob in 2014 — it is a chic update on her existing style.

The model and Transformers 3 actress debuted her haircut on Twitter with a photograph captioned "Ready for 2015 equipped with a fresh new do! Thank you @georgenorthwood @sallynorthwood #BeThereOrHaveBadHair." Bad hair is certainly not a thing Rosie Huntington-Whiteley has to worry about. Prior to her cut, she rocked the evergreen "endless blonde waves" look. Since I'm partial to a little bit more polish, I think the lob suits her even more.

I know the long bob is a look that works for just about everyone, which explains its insane popularity this year, but I can't help but be a tiny bit disappointed whenever a new star succumbs to the trend. Rosie Huntington-Whiteley isn't exactly known for taking huge style risks — I think of her as a red carpet safe-bet — so it would have been fun to see her with a really interesting cut. Still, one can't deny how good she looks. I guess the classics are classics for a reason.