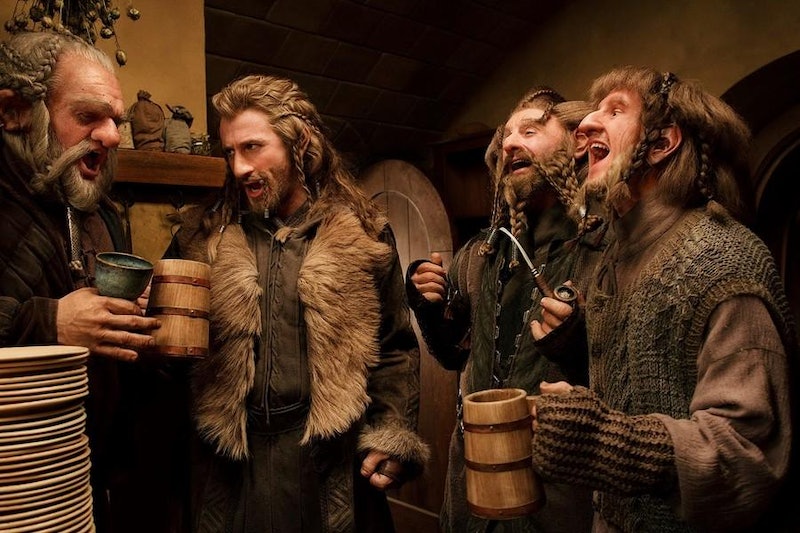 It's that time of year again. The holidays are over and everyone is settling back into their day to day lives. But as 2014 comes to a final farewell, we are accosted with a hoard of end of the year lists to remind us of everything that has come to pass over the last 365 days. Lists like: The best films of 2014, the best female-centric TV shows, the best music videos that avoid cultural appropriation (maybe). But you can read about the best performances from actors and singers and television personalities for weeks to come, it's award season after all. Here at Bustle, there are two things we know well: Women's interest and beards (OK, and cheese — we love cheese). So instead of littering your browser with yet another opinionated list you can find on a dozen other websites, here's the opinionated end of year list you really want.

Behold: The 33 best beards (and a few mustaches for good measure) of 2014 in film. A Bustle official ranking from worst (the unkempt, the spotty, the barely-there) to the very best (full, lush, and all around beardtastic). While many beards graced the big screen this year, we've attempted to narrow it down to the most memorable.

It's hard to give Seth Rogen any major points for his neck/facial hair in Neighbors, without giving the same points to the actor himself. He's rarely (if ever) seen without his signature facial hair, and the roles he takes on more than not adapts to his already established look.

There are a lot of odd and unconventional things about this film, but Jason Schwartzman's heavy beard isn't one of them.

OK, I'll be honest, I didn't really realize he had facial hair, or a face at all, until compiling this list because, well... ABS.

With his square-framed glasses and neatly trimmed facial hair, this isn't your Mama Madea's Tyler Perry.

You don't necessarily want the man preparing your food to have a massive beard to accidentally dip into soups and stews, but Jon Favreau's light sprinkling of facial hair is the perfect amount of manly and professional.

28. Cinderella's Prince — Into the Woods

Chris Pine was the surprise hit of 2014's musical epic Into the Woods, and not only for his shockingly good singing voice. His douchey take on Prince Charming was utter perfection, and his light, clean stubble made his sexy and arrogant vibe all the better.

Willem Dafoe is hard to humanize — this isn't to say he only plays bad guys, but his look is a distinct one. In John Green's mega-hit adaptation, the actor is transformed into a pessimistic and bookish writer with the help of some scruffy facial hair.

What is Michael Caine without his iconic white hair? Add a beard and mustasche and you have a look worthy of another Christopher Nolan film.

The facial hair of a man who is out of f*cks to give, Michael Keaton's salt and pepper beard adds to his persona of a fading Hollywood star.

Tom Hardy is famous for covering up his face, whether it's a metal cage (The Dark Knight Rises, Mad Max) or simply an epic beard, Hardy knows that even with his face half out of view, his talent will be visible.

If you dislike Mandy Patinkin, you're probably related to, or friends with the devil. He's the epitome of likable, and his fatherly loved can be seen in his long, curled beard. Father, grandfather, mentor — the beard says it all.

While the movie itself was dubbed boring and lackluster to most, you can't deny the film's A-lister cast didn't sport outrageously awesome facial stylings.

21. Peter Quill — Guardians of the Galaxy

Scruffy but adorable, the facial hair of a man who lives on another planet but belongs on Earth.

This beautifully crafted film about fatherhood from director Kat Candler features Breaking Bad's Aaron Paul, and an attempt to trade his baby face for a scruffier full-beard look.

French people have mustaches, we get it. But it was fun to see Modern Family's Ty Burrell in a role that allowed him some unique facial stylings.

A plastic beard that is still full and full of historical promise.

Outside of being the funniest film of 2014 summer fare, Ice Cube's facial hair is on-point: Well-trimmed and groomed into perfection for his role as the haughty police captain.

OK, so this is more of a tip of the hat to Michiel Huisman. Whether it's Game of Thrones or those hideous Chanel No. 5 advertisements, Huisman is rarely (ever?) seen without his luscious facial locks.

Justin Long with that massive mustache, I can't even...

I have voiced my concerns about this White-guy-as-Moses film, but you can't deny the epicness of Christian Bale's neatly trimmed holy beard.

Shia LaBeouf was truly the most exceptional part of this gruesome WWII film, and his full, 1940s beard helped lend his Bible-quoting character a humble look.

We love Jeff Bridges in all of his forms, but with a long, wise-man beard, it brings The Dude full circle.

Disney's version of the Greek God was both a ginger and clean-shaven, but Dwayne "The Rock" Johnson's version of the icon is neither red-headed or juvenile — He's a full grown man's man with muscles to spare.

Mark Ruffalo tackles the role as real life Olympic wrestler David Schultz with an innate likability, and we owe a bit of our affection to that full, dark beard. A man with a beard as complete and glorious as Ruffalo's begs for our empathy, and we offer it gladly.

9. Sir Lancelot — Night at the Museum: Secret of the Tomb

We loved Dan Stevens' as the clean-shaven Cousin Matthew in Downton Abbey (until he came to his ill-timed and pathetic end), but he's even sexier as Sir Lancelot, complete with golden beard and shining armor.

What would the biblical epic be without Russell Crowe and his giant beard?

It's been a while since we've seen Keanu Reeves in something worthwhile, but the darkly humorous action flick John Wick gave us not only quality Reeves, but over-the-top beautiful beard-dom.

See the many faces (ha!) of Ethan Hawke's facial hair over the course of a dozen years in Richard Linklater's ambitious project.

5. All of the Dwarves — The Hobbit: The Battle of Five Armies

No explanation is needed, save to say that most other beards can't be braided and twisted and adorned in a million different variations. Tolkien's idea of facial hair tops them all, hands (or hairy Hobbit feet) down.

Joaquin Phoenix with mutton chops as a washed up pot-smoking surfer is everything.

Technically not a beard (or a mustache), but rather a black sharpie used to draw on fake facial hair, this pubescent lobby boy's false stache reminds us of falling asleep too early at the middle school sleepover, and wanting to grow up too fast.

2. Wolverine — X-Men: Days of Future Past

There is no denying that Hugh Jackman's impressive facial hair is one of the best in the human and animal kingdoms.

1. Gandalf the Grey — The Hobbit: The Battle of Five Armies

The epitome of the word beard, Sir Ian McKellan's take on the fabled and famous wizard is timeless and perfect.