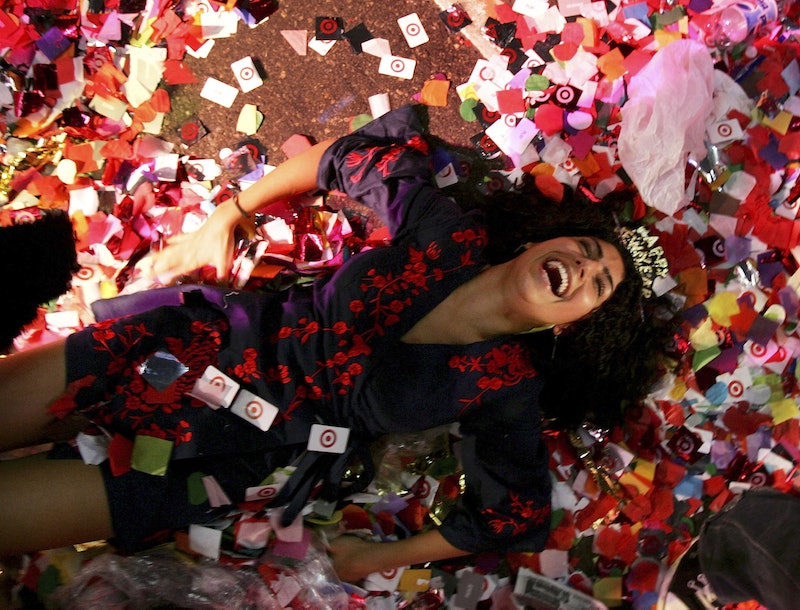 I'm a recovering addict and alcoholic. During my first year of sobriety, the mere thought of New Year’s Eve had me panicking months in advance (like, September). I couldn’t fathom the idea of spending such a holiday without my two besties: drugs and alcohol. As far as I was concerned, spending New Year's Eve sober made about as much sense to me as ordering a Diet Coke with a super-sized extra-value meal. People do it ... but why?

Now, two years later, I find myself less and less preoccupied (read: obsessed) with these two formerly-preferred party favors of mine. I’m by no means cured of my addiction (because we all know that’s impossible). And I don’t hold any sort of degree in addictions counseling either (I have an MFA in Creative Writing though so … close enough). All I have are my own experiences and ideas to share. In the past 24 months, I've actually managed to enjoy several smashingly jocular holidays without the use of drugs or alcohol.

So, if you think you can't do it, then I'm telling you that, yes, you can. Whether you're in recovery, sober, or would rather just not drink tonight, here are a few ideas of how to spend a fantastic New Year's Eve — sober.

1. Attend (or host your own) “Dance Dance Party Party”

“Dance Dance Party Party” is the brainchild of NYC dance-party denizens Marcy Girt and Glennis McMurray. It was created as an alternative to the ungodly cover charges and detestably boozy milieus of the city’s popular nightclub hotspots. The rules of DDPP are simple: No Boys. No booze. No judgment. (Legwarmers optional.)

Though women can attend actual Dance Dance Party Parties in a few select cities across the nation, the fundamentals for starting your own are both easy and modifiable. Pretty much, all you need is a stellar spot to shake what your mama gave ya’, a handful of friends (and by “handful” I mean anywhere from 5-50), and a killer playlist.

If it sounds super simple, that’s because it is.

For obvious reasons, New Year’s Eve can be a stressful time for recovering alcoholics and addicts. Seems like everywhere you go, cocktails are being served, toasts are being made, inebriated life-changing revelations (long forgotten 12 hours later) are being had. Both NA and AA host “marathon meetings” on certain holidays, among them Christmas, Thanksgiving, July 4th, and, of course, New Year's Eve.

These marathon meetings are held consecutively for the majority of the day to ensure addicts have a safe place to go and stay, oftentimes with a group meal and/or sober party thrown into the mix. Check with your local AA/NA agencies online for times and places. Alco-thons are a lot of fun — and you don’t need to be a middle-aged man in a trench coat drinking oily coffee from a Styrofoam cup to attend.

Another NYC party-circuit alternative, “breakfast raving” actually happens in the morning (hence the whole breakfast leitmotif) and is more of a Big Apple-centric fitness fad. But that doesn’t mean you can’t host one of your own. Morning Gloryville in NYC commences their festivities at 6:30 a.m. Among the perks available, this early morning “conscious clubbing experience” offers coffee, a “cloak room” (to store your professional attire), a kick-ass dance floor, and a massage station.

4. Go To a Destination Party

As its title suggests, a “destination party” is just that — a celebration at a place of your choosing. Perhaps you are in a warmer climate this time of year? Consider having a bonfire or going on a night hike. In a colder climate? Rent a cabin for the long weekend. Sometimes, just leaving your typical environment and changing up your routine lessens the stress of staying sober.

Throwing a game-centric fete for you and your sober friends is almost always a safe bet. Settlers of Catan and Telestrations are among my favorite games to play. In fact, I spent my first sober NYE playing Apples to Apples at a friend’s apartment, surrounded by other women also in recovery. After the game, we made clandestine New Year’s wishes with the use of flying wish paper.

And if that sounds too corny for you, then play Cards Against Humanity and don’t make any wishes.

Mocktails are tasty. And as long as they don’t trigger any cravings for the real deal, they’re great to serve at sober parties. I dig Avocado Rancheros or Green-eyed Monsters the most. Just a word to this wise: when it comes to non-alcoholic beverages, I personally steer clear of non-alcoholic beer for two reasons: it contains alcohol (though less than 0.5% ABV, N.A. beer is still not technically alcohol-free), plus, should I drink one, it would most certainly trigger a hardcore craving for its wilder, booze-laden cousin — alcoholic beer. Since I used to be a straight-up beer guzzler, you can see why I forego the Coors Cutter.

7. Celebrate With Drinkers — But Stay True to Yourself

No matter what you choose to do, the most important factor, my friends, is this: be prepared. If you’re sober and planning to spend your New Year’s in a place where alcohol is being served, devise an exit strategy beforehand. And don’t worry about what others think if, say, you’ve gotta scoot at 11:35 p.m. because the temptation to drink is too much to handle. I’ve been there. And all I did to excuse myself was say, “Hey, I’m peacin’ out. Thanks for a good time. Bye!”

In a difficult social situation like this, two things become glaringly more important than everything else: you and your sobriety. It also helps to make sure your cell phone is fully charged should you need to call a friend, a sponsor, or even a hotline.

And with that, I bid you all a happy and safe New Year! Ching ching!

More like this
22 Movies On Netflix That Are Perfect For The Whole Family
By Bustle Editors
Why Experts Say Sleeping With A Fan On Isn’t Totally Risk-Free
By Sophie McEvoy
The 8 Best Chew Bones For Puppies, According To A Vet
By Andrea Hannah
The 5 Best Sand Flea Repellents For Bite-Free Living
By Elizabeth Enochs
Get Even More From Bustle — Sign Up For The Newsletter