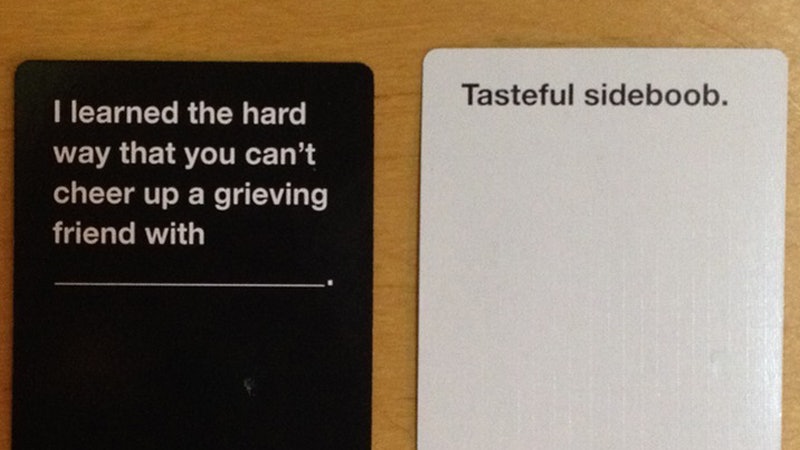 Oh, you're still into Cards Against Humanity? What is that again? Is it that little card game where you pair offbeat scenarios with super-offensive punchlines? Punchlines that usually involve a sexual fluid or something? Yeah, that's pretty cute. I used to be into that a few years ago, before I got really into this other game instead. Here, see, it's kind of like a classic Tamagochi, but it's also kind of a like a Polaroid camera? The case was designed by Greta Gerwig. Oh, no, you can't get one, they only sell it in Sweden. They only ever made six. Also, I bought all six.

Do I want to play a round? Well, I'm kind of over cards. I think they distract us all from more important issues, like global warming and whether it counts as DJing if you're just playing songs off your iPod. But yeah, sure, I'll go a round for old time's sake. I have, like, 40 minutes to kill while they finish hemming my selvage denim jeans.

I have to warn you, though, I used to be pretty good at this. I don't want to you to feel bad when I quote "beat you" unquote. I mean, winning and losing are both bourgeois constructs that don't even really make any sense in a post-industrial society like ours, where the value system doesn't privilege outdated concepts like superiority through brute force anymore. But, like, I will still definitely beat you.

Oh, damn it! You got me so worked up, I spilled my Stumptown. I am going to kick your ass raw, dude.

Particularly when I express them via ukulele.

I bought it on eBay. It once belonged to David Foster Wallace's neighbor's housekeeper.

He's finally cut out all the fat. It's the artistic breakthrough we've all been waiting for!

Hey, it takes a lot of money to look this much like an extra on Saved By the Bell, okay? Do you think I just found this Hypercolor shirt lying around my house? No, I bought it from a small-batch hypercolorer in Detroit.

This tank top was tagged as "funeral-appropriate" on the Urban Outfitters website, but that really turned out to not be accurate. I am going to leave some really terrible feedback about it, let me tell you.

Of course, there's a a limit to how much tight pants can heal alone. If you want to stop being allergic to peanuts, you need to get some ironic retro crop tops involved.

Don't try any of mine, though; it's pure enough to kill someone who hasn't developed a tolerance through years of heavy usage.

Okay, fine, it's neither, I just bought some really great eyeliner.

I feel like in 2015, my Etsy business selling hand-knit menstrual cup covers is finally going to turn a profit. Thirty-four is going to be my year!

I mean, the church was behind the entire nu metal thing. If they weren't, then why was the Pope was thanked on the final Hoobastank album?

It gives the whole thing a kind of chill, "yacht" rock kinda vibe. I don't know, might be cool.

I guess it still won't be as bad as the time she asked me to explain Tinder, though.

More like this
What Is The Forest Personality Test? The TikTok Trend, Explained
By Georgina Lawton
9 Funny Instagram Locations To Use On Your Next Post
By Siena Gagliano
What Does POV Mean On TikTok? The Popular Acronym, Explained
By Emma Carey
Here’s How To Get Verified On TikTok
By Emma Carey
Get Even More From Bustle — Sign Up For The Newsletter