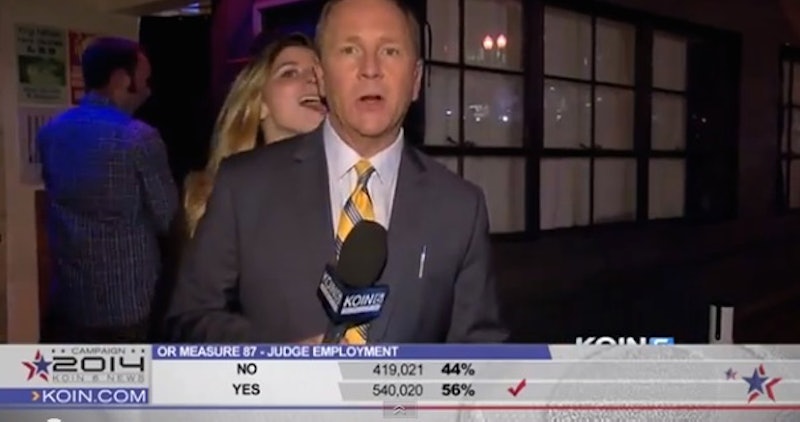 Don't look now, but 2014 is almost at an end. And with that comes, well, the usual slew of end-of-year lookbacks, retrospectives, compilations — all to fill those last moments we have for reflection, before turning the calendar and diving into what comes next. So, with that in mind, why not take a few minutes to look at the lighter side of the news year? Watch these best news bloopers of 2014, and let yourself be cheered! After all, with so much of this year's news dedicated to truly challenging and terrible happenings, it never hurts to unwind by tickling the funny bone.

In this case, the year's definitive news blooper reel comes courtesy of NewsBeFunny, and it's gotten a ton of play around the internet Monday. Most of what you'll see comes from local news broadcasts, often havens of technical snafus, embarrassing mixups and accidental hilarities.

Be forewarned — this video is, as they say, NSFW. There's cursing, sexual innuendo, some very poorly-timed slips of the tongue, everything you'd expect. There are also some moments in here that've been covered by Bustle before, for both humorous and problematic reasons — a deeply gross instance of a male anchor ogling a bikini-clad reporter at a water park, for example, or former Alaska news anchor Charlo Greene quitting on-air to run a marijuana business, with an emphatic parting shot. But on the whole, the fascination with moments like these, whether silly, awkward or bizarre, is pretty hard to deny.

There you have it! A veritable fifteen minutes of sweet, sweet schadenfreude. I consider myself particularly sympathetic to the reporter who got struck in the back of the head by an unseen, flying skateboard — having suffered a similar blow once myself, it's a pretty confused and adrenaline-gushing feeling. And, of course, as a Californian, I can't help but relate to the broadcast being interrupted by the rumblings of an earthquake.

There is an undeniable undercurrent to a lot of these clips that's worth mentioning, as well — on-location reporters sure have it tough. The instinct to screw up somebody's live shot is apparently just too tantalizing for a lot of miscreants to pass up. Here's hoping that 2015 is a slightly less awkward year than 2014, for all of these people's sakes — although, if and when things do go wrong, rest assured we'll all be there to chuckle about it.

More like this
25 Things I've Reduced My Life To, In Addition To WFH In My PJs
By Ginny Hogan
7 Things We Learned From Rebekah Vardy's First Post-WAGatha Christie Interview
By Sam Ramsden
What We Know About Where Caroline Watt Is Now
By Catharina Cheung
How To Change Your Twitter Handle
By Emma Carey
Get Even More From Bustle — Sign Up For The Newsletter