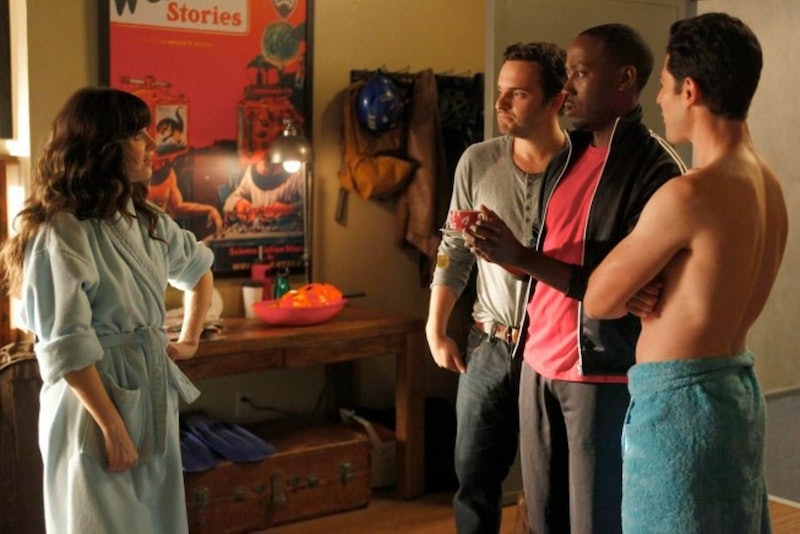 I must have burned an apartment building to the ground in a previous life with my landlord and roommate trapped inside. There’s no other explanation for the WTF-inducing things that have continued to happen to me in living situations. In the past eight years, I've lived with 16 different people in five different apartments. Some roommates were assigned while living in dorms, some were friends I chose to move in with, but most were strangers I found on Craigslist to fill a spare room.

It doesn’t really matter how you find your roommates: Whether you’re living with friends or strangers, everyone will have to deal with issues like how to pay the bills, the way you’ll treat communal space, and what sorts of behavior and habits are acceptable. These are boring details that are different for everyone — but those mundane details can make or break your living situation.

My past roommates and landlords have forced me to learn about things I wish I’d never had to deal with. But I’ve learned a lot from my experiences, and now I know it’s best to think ahead. Hopefully these tips can help you learn from my mistakes and avoid getting into any of these wretched situations for yourself. Here are six tips I have for anyone renting an apartment with roommates.

TIP #1: Do Your Social Media Research

Do you remember that Chris Rock sketch about first dates? He said that when you go on a first date with someone, you’re not really meeting them — you’re meeting their representative. This is also true when it comes to meeting potential roommates. That girl at orientation who you thought would work out great because she claimed to be just as interested in classes as she was in going out? Think again. She’s going to fill all the common space in your tiny dorm room with extra dressers for her clothes, click-clack in from the club at 5 a.m. when you have an 8 a.m. class, and put butterfly decals all over the walls.

My Advice: Find out who this person really is by doing a little social media research before they move in. They may say “I don’t want to bring the party home” — but late-night Instagrams of keggers in their living room or Facebook event invites for their weekly Tuesday night parties may tell a different story. If you have friends in common, try to ask leading questions about the person. Having someone describe a typical night out with her might get you more valuable information than grilling them point-blank about what time she usually comes home.

You can also try asking why they're looking for a new place to live. Learning why someone splits up with former roommates can reveal a lot about what they may have issues with.

Remember: having your name on the account makes it your legal responsibility. You don’t want to be stuck holding the proverbial bag — and the full dollar amount — if someone leaves without paying their share. The cable company will not care that the person who opened the account broke up with you and moved across the country. They will still require them to appear in person in order to switch the bill over to your name. Know this, and plan ahead.

My Advice: Just split up the tasks of setting up the electric, gas, and Internet accounts right when you move in. Less individual hassle, more long-term insurance. If one person will always be in charge of writing the rent check, the other roommates can pay the utility bills in full and deduct their roommate's share from the amount they transfer over for rent.

Another method is keeping the bills in a visible place (like the fridge) with the total amount, what each roommate owes, and the due date written on the outside of the envelope. Then people can pay each other back in cash or with a tool like Venmo. The most important thing here is transparency. As long as everyone is clear on who owes what and why, people shouldn't get upset.

Location is important, but it goes beyond your commute time. The three-bedroom duplex in Park Slope might seem amazing at first (one block from the subway! backyard with garden and raspberry bushes!!) but it’ll get annoying fast when the super needs to get to the boiler room, which just happens to only be accessible through your room.

My Advice: Even though it sounds odd, ask if any maintenance for the building needs to be done from your unit. Keep an eye out for strange access areas, especially if you're on the ground or basement levels. If you're on the top floor, make sure the roof and gutters can be accessed in a way that doesn't involve climbing through your bathroom skylight.

Decide in advance how often a significant other is allowed to sleep over before they have to pay rent, and talk about how everyone’s share of the bills will be affected if they move in. Otherwise, when a roommate’s dude sleeps over every night for three months yet swears he doesn't owe anything because he “doesn't technically live there” (whatever the hell that means) the bills will stay unchanged.

My Advice: Even if this isn't something you think will happen, discuss it and put the decision in writing. That way, nobody can say they didn’t know the house rules beforehand.

Are you renting from a management company, or the owner? If it’s the owner, do they live in the building? Before you think 'oh, it’s totally not a big deal, they seem really nice and aren't going to be intrusive at all,' consider my cautionary tale: I wish I'd thought to do more research on the landlord my current apartment. Instead, I wonder whether the girls who lived there before my roommate and I also fled the space as quickly as their wallets could carry them after finding their landlord creeping around the apartment stark fracking naked when he thought nobody was home.

My Advice: Think long and hard about whether you want to share a building with the people to whom you pay rent. Ask to speak with previous tenants to find out how long they lived there, and why they’re moving out. If the landlords won’t share their contact info, run for the hills.

TIP #6: Always Have a Backup Plan

When I left my first three-bedroom apartment, the plan was for us all to find a new place together. Literally moments before the lease was about to be signed, one friend backed out. The other roommate and I loved the apartment, so we signed the lease and had a series of Internet people move in and out over the next two years. After that, we planned to get a two-bedroom, but she flaked out last minute. (For the record, I forgave her and we still live together, lest you think I’m driving people away.) I tried to find another three-bedroom with the friend who bailed on us the first time. But ... fool me once, shame on you. Fool me twice, I'm the only person on the lease of a three-bedroom apartment and it’s difficult to remember the full list of the other roommates I had there.

My Advice: Make sure the people you think are moving in with you are actually moving in with you. Have contingency plans. Do you know of any other people looking for roommates? Is there anywhere you could crash short-term if you can't find a new place before your old lease ends? Would you be comfortable finding a room for rent with strangers? Knowing the answers to these questions — even if you never intend to use them — can save you from hastily making a bad decision if your plans suddenly change.