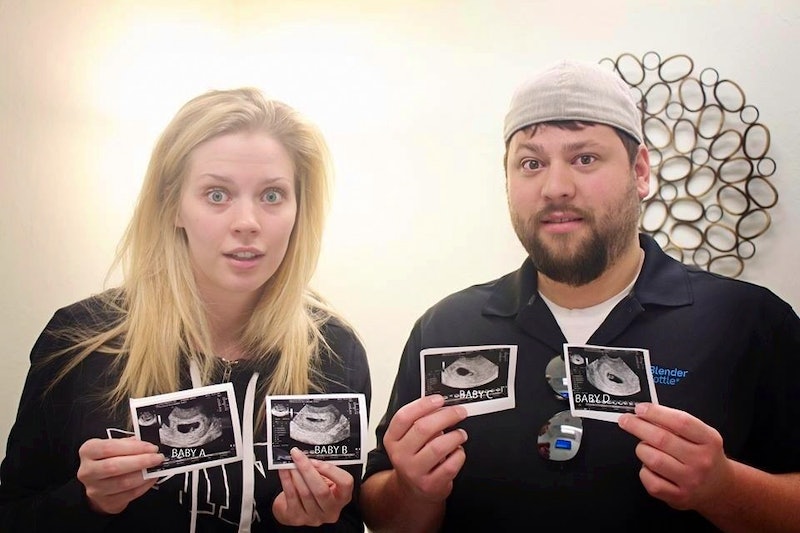 Hey, remember two months ago in early October, when two new parents' reactions to their ultrasound revealing quadruplets went viral? I know I'm asking a lot of you because it is hard to remember a world without being up in arms about The Interview and recreating sad mascara "Blank Space" selfies in the comfort of your own bathroom, but squeeze your brain parts for a second and you'll remember the ultrasound reaction face that was seen 'round the world. You'll also remember from junior high sex ed that pregnancy has been known to be a leading cause of actual infants, so it shouldn't come as too much of a surprise that the viral ultrasound mom gave birth to her quadruplets, squeaking in four new adorable humans just before the end of 2014.

In case you forgot just how epic these particular quads are: As a result of her endometriosis, Ashley and Tyson Gardner had been trying IVF treatments for eight years without success by the time this quadruple whammy came along. And yeah, you're probably thinking, "Oh, cool, IVF explains why there were so many humans in her uterus," but you'd be a little bit wrong—the other plot twist is that they only implanted two eggs. In a rare instance that I'm assuming is God's way of saying he likes for ultrasound videos to go viral, both eggs split on their own, a one in seven million chance.

Fittingly, the babies already have their own superhero group name: the "Quad Squad." The Gardners have been keeping everyone up to date on their Facebook page, where they announced that all of the babies were born on Sunday, December 28, all around two pounds. So far we know that one is named Esme and another Indie (the smallest of the group), and also that TLC has been involved in documenting it, so although we are all patiently waiting for adorable baby pictures (as is my near constant state of being), we can all rest assured knowing that the Channel With All The Feels will eventually do it justice for us. Here is a video they released just before the birth:

And here are the pics we have so far:

And heeeeere's a throwback to the most hilarious birth announcement the world has ever seen, which I can only take as a good sign -- they're going to need a sense of humor considering they're not likely to get much sleep for say, oh, the next two years: