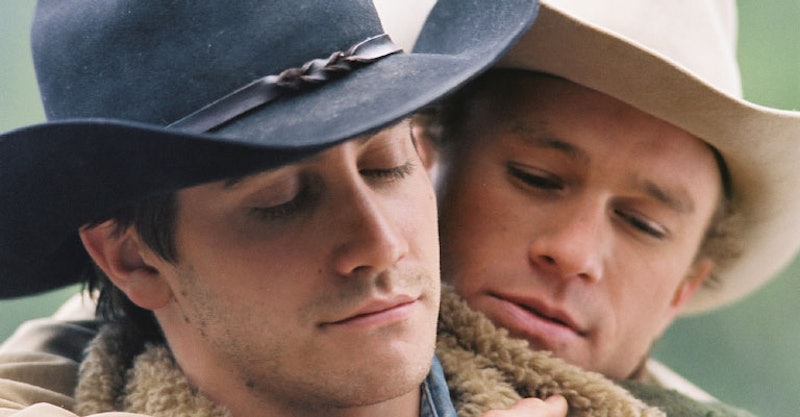 Chances are even if you missed reading Annie Proulx's incredible short story "Brokeback Mountain," you caught wind of the multiple Academy Award-winning movie adaptation starring Jake Gyllenhaal and the late Heath Ledger. But a 2009 interview with Proulx in The Paris Review is coming back into public attention thanks to its revelation that she wishes she never wrote "Brokeback Mountain" in the aftermath of the film.

"Brokeback Mountain" is part of Proulx's Wyoming stories, and it centers on two men, Ennis del Mar and Jack Twist, who meet when they are hired to look after sheep at a seasonal range. Their story plays out over two decades as they form a sexual and emotional relationship, but they also marry respective wives, have children, and find new jobs.

Spoiler alert! It doesn't end all hunky dory, lovey dovey for Ennis and Jack, no matter how much we all wish it would. Instead, Jack is killed in a hate crime — and this seems to be the point of contention with readers. But not to put words in her mouth, let's break down what Proulx herself has to say about why she regrets writing "Brokeback Mountain":

So many people have completely misunderstood the story. I think it’s important to leave spaces in a story for readers to fill in from their own experience, but unfortunately the audience that “Brokeback” reached most strongly have powerful fantasy lives. And one of the reasons we keep the gates locked here is that a lot of men have decided that the story should have had a happy ending. They can’t bear the way it ends — they just can’t stand it. So they rewrite the story, including all kinds of boyfriends and new lovers and so forth after Jack is killed. And it just drives me wild.

But that’s not the story I wrote. Those are not their characters. The characters belong to me by law.

But what Proulx seems to be sidestepping is that people have these "powerful fantasy lives" and "rewrite the story" because the characters she has created are so powerful and so beloved that fans (and they are fans) cannot bear to have such a tragic fate befall them. That's a credit to the author. She goes on:

I agree that it must be frustrating to feel like something you've put so much work and heart into is completely misunderstood. But all I can say to Proulx is that the people misunderstanding the crux of your piece doesn't make them bad people or even bad readers. They are engaging with your work enough to take out a piece of paper, an envelope, and buy a stamp to talk more about it. (This doesn't count for readers who are rude, of course, or overtly mean, but no writer should be paying attention to trolls, anyway.)

But there is something that I can identify with Proulx about:

I can’t tell you how many of these things have been sent to me as though they’re expecting me to say, Oh great, if only I’d had the sense to write it that way. And they all begin the same way — I’m not gay, but . . . The implication is that because they’re men they understand much better than I how these people would have behaved.

Ugh, mansplaining is the worst. I'm with you on this, Annie. I can't imagine how annoyed she must get with this type of tone in fan letters. But hey, Annie: You literally wrote the book on this. You don't have to even entertain these sentiments. Say your piece on why you wrote it the way you did — or don't. All of us women have to deal with this kind of thing everyday, so it's great you brought it up, but don't take back "Brokeback Mountain" because of it. That's just letting the men here win.