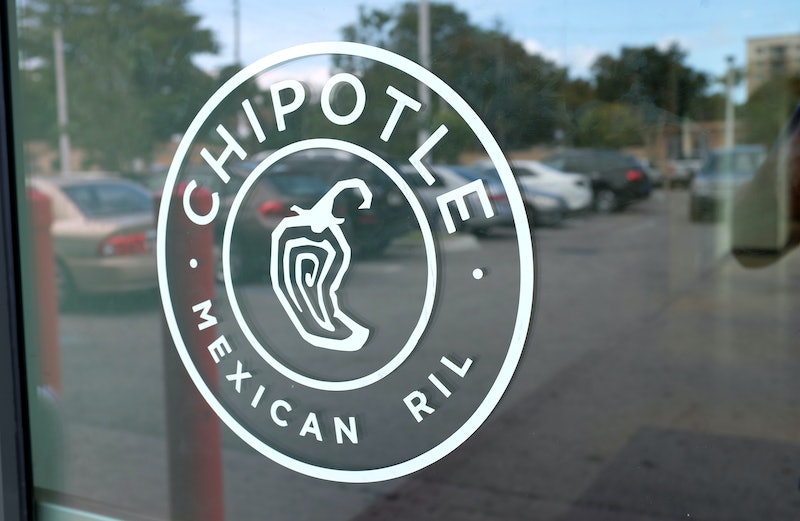 Never fear, everyone! The great Chipotle fracas of late 2014 has finally resolved itself, or at least it hopefully has. On Tuesday, the heads of the sprawling Mexican fast-food chain, CEOs Monty Moran and Steve Ellis, issued an apology over an employee who reportedly made a protest gesture when a New York police officer entered the building. That's right — Chipotle apologized to the NYPD for the "hands up, don't shoot" gesture of one of their workers, though they would not identify who did it, and they denied initial reports from a pro-police Facebook account that the officer was refused service.

News of the protest gesture and resulting outrage was sparked on Dec. 17, when a man named Ray Melendez posted on Facebook that "an officer involved at the incident" reported that multiple employees "raised their hands and said 'Hands Up, Don't Shoot' to the officers," as detailed by USA Today. I can't link you to the post itself, sadly, as it's since been deleted. Chipotle denies this particular allegation, saying their review of security footage, as well as interviews with staff have determined the symbolic protest was the unplanned action of just one employee, not several.

We work very hard to ensure that every customer in our restaurants feels welcome and is treated with respect. Clearly, the actions of this crew member undermined that effort.

In sum, the whole dust-up is both understandable — who wants to get hassled on their lunch break? — and quite off-putting. Obviously, standards of behavior when you're on the clock, so to speak, are different from standards when you're not. The First Amendment doesn't shield employees from discipline by a company if they do something like this, as per the difference between public and private. And while it hasn't been made clear what if anything will happen to the employee, in a legal sense he could almost certainly be fired for doing so.

But it's also worth noting what the climate in New York was like at the time this happened — this was days before the grisly shooting deaths of NYPD officers Rafael Ramos and Wenjian Liu, which galvanized the current levels of tension and outraged support for the department. On Dec. 16, the only thing anybody was really talking about as regards to the NYPD was the mind-blowing non-indictment of the officer who killed Eric Garner.

For perspective, look at it like this: the Liu and Ramos murders have rightly been condemned all across the country, and by countless members of the Garner protests, including his mother. And with Ismaaiyl Brinsley having fatally shot himself after killing the pair, there's no further avenue for justice to be done. Essentially, he paid the price for his heinous crime with his own life. Regardless, many in the NYPD — not just one officer, as Chipotle claims one worker did — have launched bitter protests of Mayor Bill de Blasio, even going so far as to turn their backs on him during the two officers' funeral services.

Garner's death, by comparison, didn't result in anything even comparable to "justice" — he died after being put in a chokehold by NYPD officer Daniel Pantaleo, and rather than offer the public outpouring of support that many have in the wake of Ramos and Liu's deaths, the NYPD largely circled the wagons. In short, the idea that the police should be assured freedom from public criticism while employing such a jarring behavioral double-standard seems, in my opinion at least, a little starry-eyed.

For what it's worth, as the New York Daily News points out, this particular Chipotle actually skirted company policy in favor of the NYPD two years ago, when it was revealed they were dishing out burritos to officers at half-price.