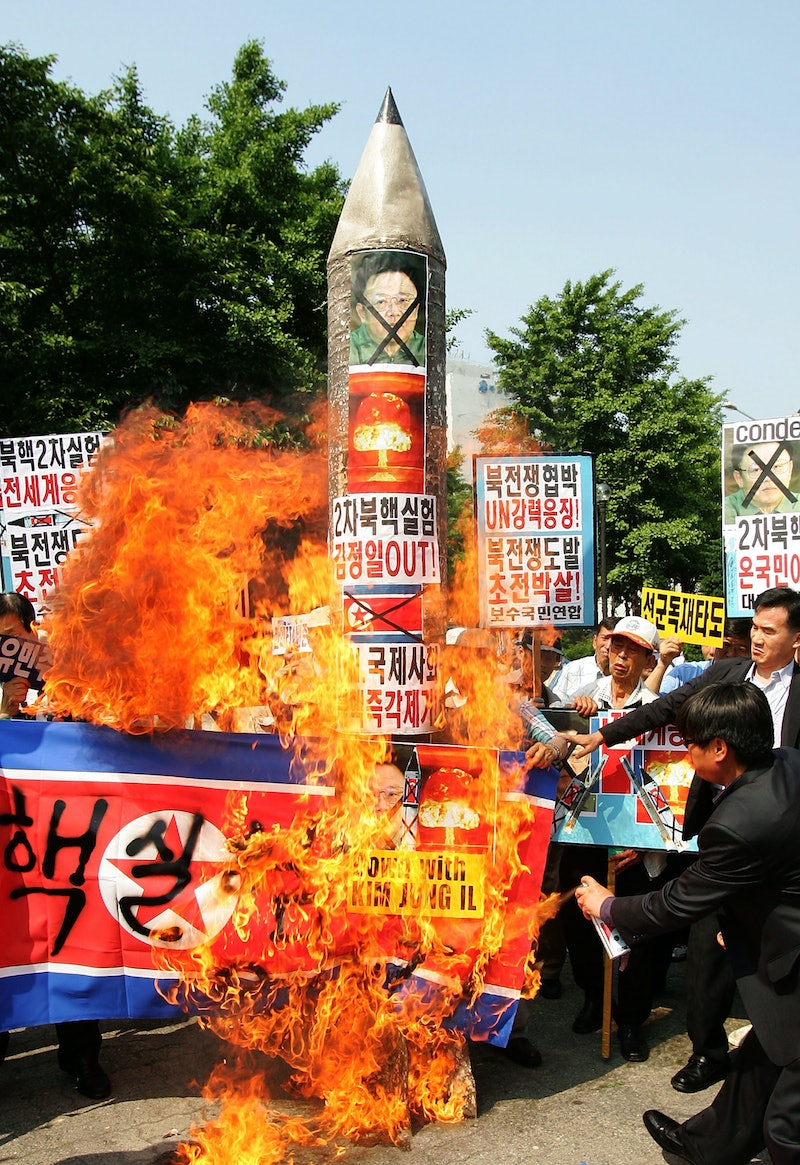 China is banning some exports to North Korea in response to concerns that the country is on the road to constructing nuclear weapons.

On Tuesday, China published a list of items that can no longer be sent to North Korea. In a 236 page document, officials outlined the reasons behind the ban on shipping items, which range from military hardware or chemical substances to the country. A statement from the Ministry of Commerce read, "The dual-use products and technologies delineated in this list have uses in weapons of mass destruction as well as their vehicles.” Yikes.

Other banned exports include the biological virus Ebola, nickel powder, radium, flash X-ray generators, and microwave antennas. (You can export the Ebola virus?!)

The increased fear and decreased exports to North Korea are thanks to recent satellite images, which show a nuclear reactor in the country producing steam, possibly meaning the county is gearing up to return to nuclear activity. The reactor at Yongbyon is capable of producing plutonium, a critical element in the manufacturing of nuclear weapons.

The global community has long been at odds with North Korea over its nuclear program. The steam seen rising from the Yongbyon facility comes six years after the country promised to shutter the facility.

About a week ago, officials in Beijing invited North Korea, along with several other countries, including the United States, to hold a conference with the aim of encouraging North Korea to give up its nuclear program. Previous negotiations led by China ended in 2009 when North Korea stormed out of the conference.

The Obama administration has declined any invitations to restart talks with North Korea about its nuclear program, citing the fact that the country has made little effort to slow down nuclear proliferation and instead seems to be focused on beefing up their nuclear capabilities. That administration has said that it will not consider resuming negotiations until North Korea makes significant steps towards dismantling its nuclear facilities.

As China focuses on stricter policies for its international dealings, some of its domestic policies may be set to loosen up a bit. According to the South China Morning Post, the Chinese government may be on the brink of unblocking various websites, including Facebook and Twitter in Shanghai, which is currently a free-trade zone.

The sites have been on lockdown since 2009 when the government used social networking sites as a scapegoat to explain riots. The Chinese government has a long history of censorship, but may be considering the move in order to seem more welcoming to foreigners.

More like this
Prince William Condemns “Unacceptable” Comments Made To A Black Guest At Buckingham Palace
By Shahed Ezaydi
The David Beckham Qatar Controversy, Explained
By Sophie McEvoy
What To Know About Martin Bashir After Watching 'The Crown'
By Bustle UK
Read Dan Levy's Heartbreaking Message After The Club Q Shooting
By Stephanie Topacio Long
Get Even More From Bustle — Sign Up For The Newsletter