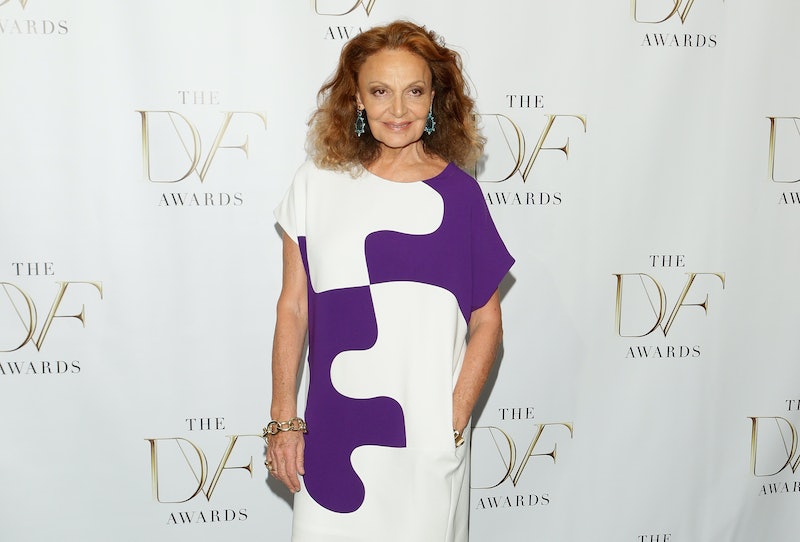 While the rest of the world celebrates New Year's Eve each December 31st, the fashion world rallies around a different occasion — Diane von Furstenberg's birthday! 2014 was a major year for the designer, who celebrated the 40th anniversary of her famous wrap dress with a star-studded ad campaign and an L.A. exhibit, published The Woman I Wanted to Be, and created/starred in House of DVF on E!. Today, Diane von Furstenberg turns 68 years old, making this the perfect time to look back on her year in fashion.

I've long been a fan of DVF's designs, but lately it seems like she's been hitting entirely new levels of chic. What amazes me most is her ability to reinvent an iconic style over and over again with exciting new prints and varied silhouettes. Some of the world's most stylish celebrities certainly agree with me! After all, it seemed like everywhere I turned this year an It girl was sporting Diane von Furstenberg, whether it was on the runway or on the street. Here are 11 of the best celebrity DVF moments from 2014.

This was definitely one of Jenner's top NYFW moments, and that's saying something.

2. Allison Williams in the Front Row

3. Coco Rocha at the Journey of a Dress Exhibit

Standing tall in a sleek, elegant python printed column beside the designer herself.

4. Mindy Kaling in Black and Gold

The Mindy Project star and creator looks cute as a button in her wrap dress.

Gotta love some regal black lace for the Duchess.

6. Selena Gomez at the Met Ball

She looks like an Old Hollywood screen siren in gorgeous plum.

7. Emma Roberts "Journey of a Dress"

So chic in a bold print.

Both of these ladies are slaying it in python and geometric shapes, respectively.

10. Paris Hilton at the Journey of a Dress Premiere

I'm obsessed with the Andy Warhol-esque flowers on this version of the wrap dress.

11. Anna Wintour at the CFDA Awards

Of course the reigning Queen of Fashion would wear DVF best in 2014.