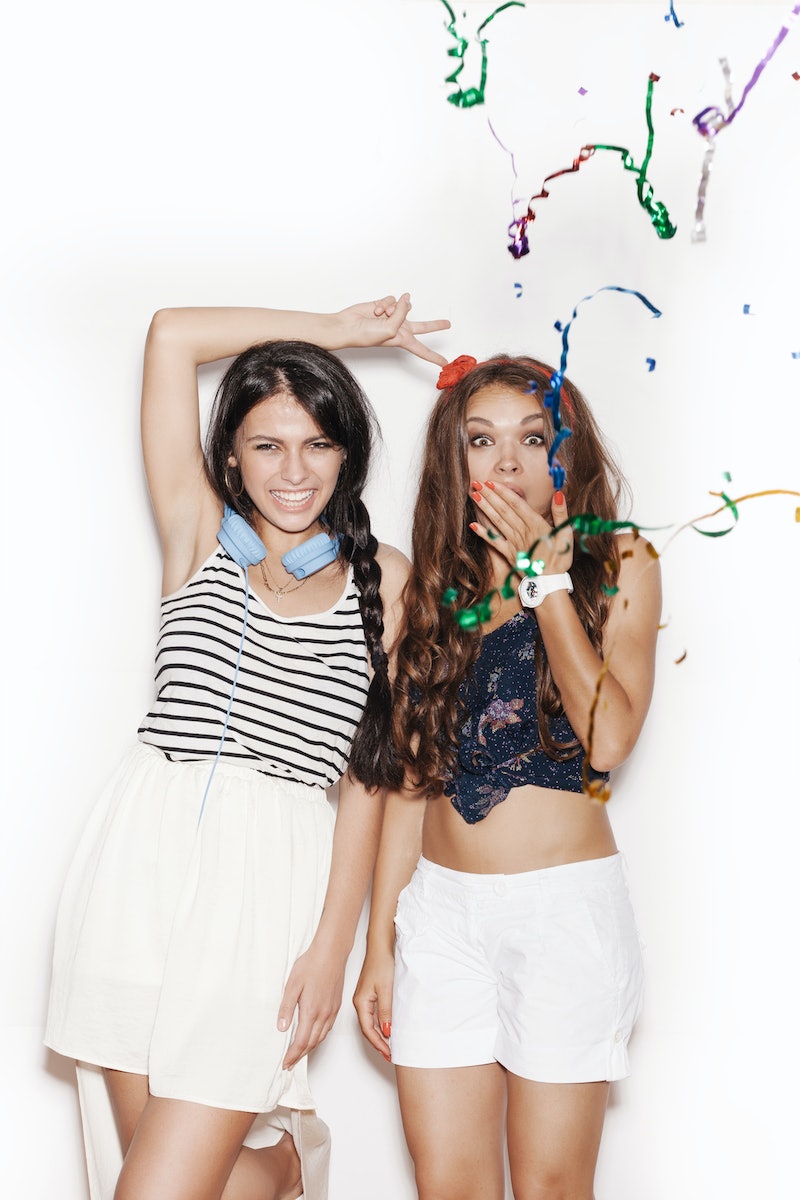 As has already been established, I love New Year's Eve. And I somehow, despite everyone telling me time and time again that the odds are against me, manage to have the best possible time every single year. There's traditionally a lot of pressure for New Year's Eve to be the most fun night of the year, and that pressure is often prohibitive to said fun being had. But here's where I melt you mind: Why not try taking the pressure off entirely? Are the cogs inside your head creaking into motion yet? Think of the most fun times you've ever had: unexpected, lazy afternoons that turn into dinner with friends, drinks at rooftop bars and dancing until sunrise. Those nights turned out to be the funnest because you went into them without putting any pressure on them. You would have been just as happy curled up in front of the TV by midnight as you were with the actual outcome. It's time to start approaching New Year's the same way.

So HAPPY NEW YEAR, friends! Whatever you have planned for tonight, wherever you're going, whomever you end up with, remember: The pressure you put on yourself to have fun is the only thing that will stop you from actually having fun. As you prepare for this year's Night Of Nights and to cross the time bridge into 2015, take some advice from me, the New Year's Eve revelry fairy. Here are six steps you can take to have the most awesomest New Year's Eve yet.

1. Let Go Of Your Expectations

Nothing ever looks like what you thought it would, especially New Year's Eve. You might get a hole in your tights. Maybe you won't be able to get a cab. Perhaps the party you turn up to won't be as jumping as you hope. Who cares? You can make whatever you want to make of what comes your way. If you decide to be upset about the things that don't live up to your expectations, you're probably going to have a pretty middling night. If you forge ahead and have fun despite everything not going your way, well done friend, because now you're on the party train.

There's nothing worse than spending half your night lined up for the loo. Make sure wherever you are on New Year's Eve is somewhere where it's convenient to pee, otherwise you're going to find yourself making small talk in bathroom lines with people you don't know all night, or hunting for hours for the nearest rest room.

The key to a fun New Year's Eve is being with people you really like. Forget being at the "coolest" party or being "seen"—just be with people (or even person; it's about quality not quantity!) who make you laugh, and you'll wind up having fun no matter where the night takes you.

I've lived on this planet for nearly thirty years and I've yet to hear anyone say, "The party was rammed wall to wall with people, you literally could not move, let alone talk to anyone or even lift your drink from your hand to your mouth. IT WAS SO FUN!"

New Year's Eve isn't supposed to be anything other than an excuse to drink and dance and kiss and hug. Get the memo. Live by it for a night. Dance like you're in a Bruce Springsteen video. Wear a tiara that says "2015" in glitter. Tonight, you're a New Year's Eve sprite and you came specifically to party.

The fancy dinner, the trendy party, the perfect dress: all that is great, but at the end of the night your main focus should be on fun, not on how everything looks. Don't sweat the logistical stuff, roll with the punches, and do your best to dance around like a maniac, and New Year's Eve wont wind up being the total bust you're so worried about.