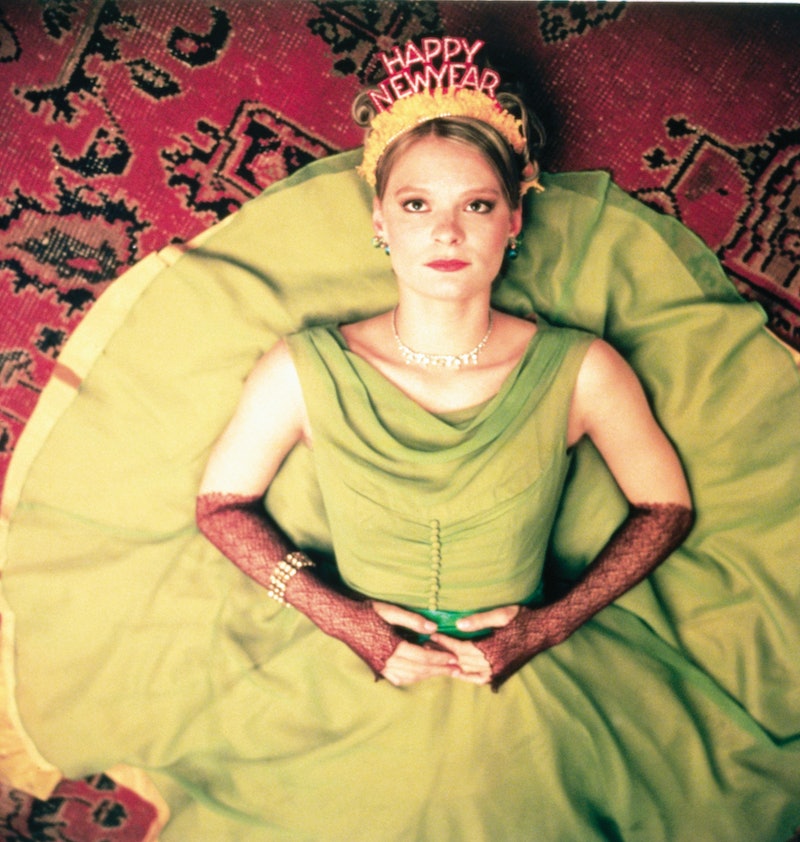 That is, of course, total nonsense — in no country in the world is there a New Year's Eve tradition that says, "Hook up with Kevin from Sales tonight, or this year is going to be another dry spell!". And, in fact, while New Year's Eve has a reputation as a holiday of hope and promise, in execution, it's actually a holiday of disappointment. In fact, 83 percent of people are disappointed by their New Year's Eve experiences.

But for the problems that can't be solved with lowered expectations — the fashion snafus, the friend emergencies, the startling realization that you've been drinking for six hours — we've got you covered below. Read on and learn how to solve your five worst New Year's Eve problems. And remember: tonight's not life or death, it's just an excuse to wear a tiara in public.

Oh, also, stop right now, run out, and buy a portable phone charger. You'll be thanking me at 3 a.m., I swear.

The Situation: You're walking down the street to your party, in a pair of brand-new heels, and you know for a fact that you look amazing. In fact, you feel so amazing, that in your head, you are secretly doing the slow-motion walk from the opening credits of Reservoir Dogs . However, unlike Harvey Keitel, you have now gotten your stiletto jammed into a sewer grate, and, in the ensuing struggle, the heel breaks clean off.

The Solution: If you haven't prepped at all, you're basically screwed — there's no way to MacGyver a fix out of, like, two mints and a tampon. But, if you prep a little, your heel can be saved.

1. To save the heel: Pack a tube of E-600 glue in your bag. It's a super-strong craft glue that you can buy at a crafts store like Michael's. If your heel breaks, apply the glue to both the stump of the heel and the part of your shoe where the heel broke off; wait a few minutes before pressing them together; and then give the shoe an hour to dry. You should be able to hobble home merrily on the thing.

2. To forget the heel: If you're not crafty, or just don't trust a glued heel, grab a pair of rollable ballet flat shoes from any major convenience store, like Dr. Scholl's Fast Flats. They'll take up more room in your purse than a glue tube, and walking in them basically feels like walking down the street barefoot (toe stubbings ahoy!), but they'll let you dance all night with a confidence that that glued heel will just never give you.

2. What If Your Dress Rips?

The Situation: You've loosened up, you've got an awesome new dress on, and you're ready to finally hit the dance floor. But you're not 30 seconds into showing a crowd of interested strangers how well you remember how to Dougie when you feel a rip. Your dress has torn.

The Solution: Assuming that, because you are a normal human being, you didn't pack a mini-sewing kit, look to the next best thing: duct tape. Take off the dress, turn it inside out, hold the ripped seam together, and run tape across it as if you were sealing the two sides of the seam together. For added security, I like to also run a few pieces of tape across my duct tape seam, making criss-crosses with the tape as a kind of brace against the original strip of duct tape. Make sure to press the tape hard into the fabric, too. It won't look perfect, you can't dance too hard or get too drunk for the rest of the night, and you will have to stay vigilant against the tape peeling, but it's still a better option than ringing in 2015 in your host's XXL "I Busted a Move at Devin Schwartzman's Bar Mitzvah" t-shirt.

3. What If You Can't Get Into the Bar You Planned on Going To?

The Situation: You've had some bunk New Year's Eves in the past, but this time, you have everything planned perfectly. You have the perfect dress, the perfect shoes, and you and your friends have picked out the perfect bar. You were just running a little late, making sure that your hair was totally perfect...and now the bouncer is saying the place is full, and none of your friends are noticing your plaintive texts to them because they are too busy drinking some cocktail that has glitter in it.

The Solution: You yourself are the best judge of whether you have the skills to manipulate your way into a situation like this (i.e. are you able to make yourself cry on command?). If you aren't able to get in through trickery, your best bet is just to stay near the door of the club. Your friends will eventually come outside to look for you if they're sober, or come outside to smoke cigarettes with some strangers from Montana that they just met if they're drunk. Either way, you'll be able to get their attention then (if the club has a specific roped-off smoking area because they're not doing re-entries, make sure to keep an eye on that).

If you've waited for 20 minutes or so with no luck, fish around for other plans — text friends who live nearby, or use the Nearby Friends function on Facebook or a similar app to find out if anyone else you know is in the vicinity. If you're spunky and have a can-do spirit, you can march into the bar next door and decide to make some new friends; if have a can't-do spirit, take advantage of the fact that it's still pretty early and you can get probably a cab, go home, and wait for Friends to start streaming on Netflix (midnight PST!).

4. What If You Get Too Drunk Too Fast?

The Situation: You did some pre-partying. Okay, let's be honest, there was also some pre-pre-partying. Also, someone at work brought in champagne. Okay, fine, you've basically been drinking since 3 p.m. Now it's 9, and you're way too tired and drunk to enjoy any of the night you have planned for yourself.

The Solution: Let's just get this out of the way right now: coffee doesn't actually sober you up. Nothing will actually sober you up except time — it takes your body about one hour to process each unit of alcohol you've consumed, which means you're going to be messed up into 2015— and if you've been drinking at all, you should definitely not drive a car at all tonight, no matter how "together" you feel.

In fact, since coffee tends to make people underestimate how drunk they actually are, and thus make terrible decisions, your best bet to rally your energy and finish out the night is just water and food. Have you even eaten dinner? Eat some dinner! Stop drinking alcohol, start drinking water, and get a full, solid dinner in you. It won't sober you up, but eating will give you more energy and slow down some of the alcohol absorption; you'll also log some drink-free hours in your night, which should help you start feeling better.

5. What If Your Friend Gets Way Too Drunk?

The Situation: You've been able to pace yourself like a champ tonight. But your best friend, to use the scientific terminology, refrained from checking herself, and as a result, has wrecked herself. We're talking Defcon 1 New Year's Eve Sloppy Drunk Mess — slurring words, falling over, barfing and then forgetting about it. She may or may not have spent the past half-hour trying to straddle the bartender.

The Solution: The bad news is, since there's no way to actually sober someone up, you've got a drunk friend on your hands for New Year's Eve. Even if you cut her off now (and you definitely need to cut her off now), she's still wasted and has zero decision-making ability. So, your New Year's Eve is now about baby-sitting this drunk.

Yes, this blows, especially if you've been talking to some promising sexual prospect. But you'll have another New Year's Eve next year (and, frankly, that sexual prospect was just leading you on). But you won't have another BFF next year, and if you leave your friend in a corner alone on NYE to go do your own thing, you will feel like a dick for the rest of your life. So, you have two options:

1. You and your friends stay at the party, and trade off shifts caring for her in a place away from the dance floor (upstairs bedroom, etc). Though the pluses are obviously that you still get to attend some of the party, the drawbacks are that some of your friends might be a little too hammered themselves to keep a proper eye on her during their shift, and also, since you're in public, there is always the chance that she could still wriggle free and run off into the night. If this feels like a concern to you, then I suggest that you go with:

2. Bite the bullet, and take her home. If she lives with parents or roomies who are home and care, you can hand her off; if not, sleep over at her place or have her sleep at yours. Don't screw with public transit — take a cab or Uber, and definitely hold on to the bill for tomorrow morning to get her to reimburse you. Don't bother with any crazy-ass dramatics where you keep trying to wake her up to force her to drink water — if she can stay awake to drink water, great, but if she can't, well then, she's going to feel like death anyway tomorrow and there's not much you can do about it.

Make sure she gets to sleep safely, put a trash bin or cooking pot next to her head in case she wakes up nauseous, and then use some of her most expensive hand creme or her super fancy mud mask so that you stop feeling all annoyed and martyr-ish about this whole thing. Then wait for Friends to start streaming on Netflix (midnight PST!), text your friends who are still out that everything is OK, and think about the big brunch she's going to treat you to in the morning.

And, honestly? Seeing as your night involved no arrests, screaming arguments with strangers, weeping phone calls to ex-lovers, or nude jogs through the civic center, you actually had a pretty alright New Year's Eve.