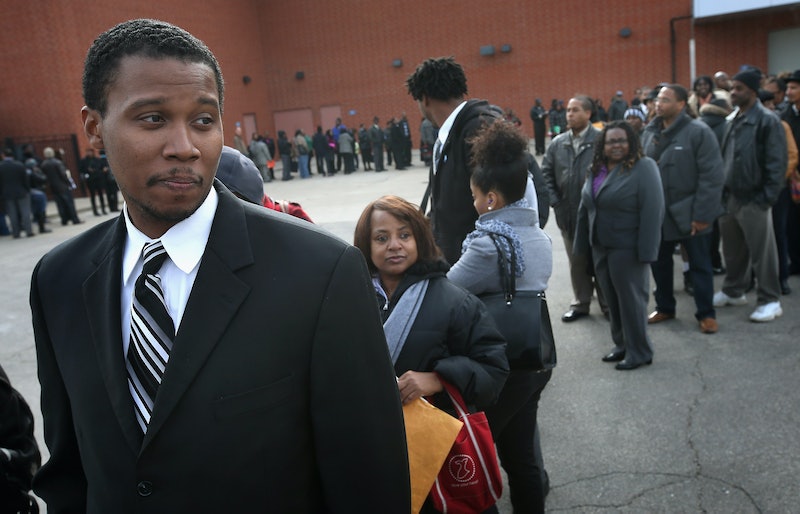 Lean times have traditionally hit minority communities harder than their white neighbors, but a series of new studies demonstrate that the recession hit young black Americans far harder. The recession exacerbated existing racial inequalities in employment and underemployment, the data shows, regardless of the level of education achieved or the type of job pursued. Another troubling element? The average financial network of black and Hispanic households continued to fall into 2013, even as white families began to recoup some of the wealth they had lost since 2007.

From a statistical standpoint, the picture is striking.

According to new study from the Center for Economic and Policy Research, the Great Recession has further widened the unemployment gap between blacks and whites. College-educated African Americans between ages 22 and 27 faced an unemployment rate of 12.4 percent in 2013, compared to a mere 4.9 percent of their white counterparts who were unemployed.

Contrast that striking gap of 7.5 percentage points with the employment gap for recent college grads in 2007, which was only 1.4 percent.

"This is very different from the past," study co-author John Schmitt told The New York Times. "You’d have to go back to the early 1980s recession to see that pattern."

Even white Americans without a high school diploma are more likely to be employed than a black American with some college experience but no diploma (9.7 percent unemployment in 2013 compared to 10.5 percent, respectively).

If a black college grad does land a position, she is much more likely to work a job that doesn’t require a college degree or a high school diploma. Out of college-educated African Americans between ages 22 and 27, over 55 percent of the employed were underemployed last year. Among the broader college-educated demographic, that figure was only 45 percent.

These figures shouldn’t surprise us, a new report from the Century Foundation says. Black Americans have generally faced an unemployment rate nearly twice that of whites, a figure that can’t be attributed to the amount of effort each group puts into finding a job. The evidence shows that African Americans tend to try harder at the job search than their white counterparts, The New York Times notes. For example, one recent Morehouse grad only found his first job after college after applying to more than 70 firms.

The recession doesn’t just hurt current earnings in black communities; it stripped black households of their wealth at a much faster pace than whites. Since 2010, white families have begun to recover some of their pre-recession wealth whereas African American and Hispanic families are still losing assets.

According to the Pew Research Center, the wealth gap between the median white household and the median black household has widened significantly since 2010. Whereas white households used to possess eight times the wealth of their black counterparts, that divide can now be measured by a factor of 13.

Historically, when the labor market faces lean times, young people and minorities disproportionately bear the brunt of job shortfalls. But as Rakesh Kochhar and Richard Fry note for Pew, aside from the possibility of statistical outliers in the 1989 survey, “the racial and ethnic wealth gaps in 2013 are at or about their highest levels observed in the 30 years for which we have data.”

The question lingers beneath the surface: What do all these statistics mean?

As many economists stress, this correlative does not necessarily prove causation — every employer is choosing not to hire young people because of their skin color — but it certainly does point to the continued problems of both deliberate discrimination on the basis of race and the structural inequalities that remain from centuries of antiblack disadvantage, dispossession and marginalization.

Nor can qualifications alone overcome the implicit biases embedded in our institutions and social structures — things like the power of neighborhood or interpersonal networks — that hold some back while propelling others to the top, Mike Cassidy notes in the Century Foundation report. These floating inequalities — disadvantages that are passively propagated rather than deliberately maintained — can be the most challenging.

What is perhaps even more telling than the substantial inequalities that black Americans continue to face in seeking gainful employment and accumulating wealth is that white Americans seem so unaware of these disparities. According to 2011 research from Harvard professor Michael Norton on poll data, a majority of whites think that black and white incomes are about the same, and only 37 percent believe that the black community makes less. Contrast that to about 66 percent of blacks whom believe blacks bring home less — and the official statistics.

The statistical evidence of institutionalized and structural racial inequality is overwhelming, yet white America continues to cling to the presumption that what matters are (ostensibly) color-blind policies rather than the conscious pursuit of policies that guarantee an equality of opportunity for all, regardless of skin color.

To borrow from Justice Sonia Sotomayor, race matters because it is still the most likely indicator of whether or not your college degree will land you a job commiserate with your education and experience.

More like this
How 'The Staircase' Cast Compares To Their Real-Life Counterparts
By Arya Roshanian
How To Fight For Reproductive Rights, Based On How Much Time You Have
By Courtney Young
LGBT+ Men Fleeing Afghanistan Were Denied Asylum By The Home Office, New Findings Show
By Sam Ramsden
The Music Industry Continues To Fail Black Women
By Precious Adesina
Get Even More From Bustle — Sign Up For The Newsletter