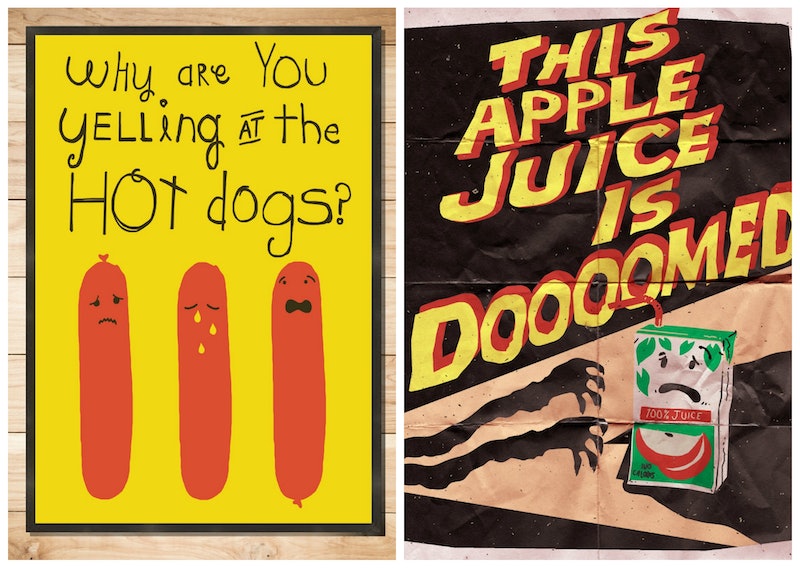 We’ve all had moments where we’ve said something absurd as if it were the most natural thing in the world, then thought immediately afterwards, “Did I really just say that?” I am not currently a parent, but I would imagine that this is a common occurrence when you have kids — mostly because that’s what the laugh-out-loud hilarious Tumblr Spaghetti Toes has led me to believe. In fact, I suspect that with small children around, this scenario describes pretty much every single word or phrase that comes out of your mouth. Ever. Whoever says kids have a crude sense of comedy has clearly not spent enough time with them, because the illustrated phrases that adorn Spaghetti Toes are the funniest dang things I’ve ever seen.

The brainchild of dad Martin Bruckner, Spaghetti Toes first came into being thanks to his wife, Michelle, and their then-two-year-old daughter, Harper Grace. According to the Tumblr’s first-ever post, its title hails from a moment at the dinner table during which Michelle said Harper Grace, “Please don’t put spaghetti between your toes.” After registering the bizarre nature of this and other statements both parents and child had a tendency to make, Bruckner got to work. “I went down to my basement a couple of days later, and just scribbled these out in Photoshop with an airbrush tool,” he told TODAY.com.

He started keeping track of the weird and amazing phrases he, his wife, and (especially) his daughter uttered, eventually turning a bunch of them into a book for Michelle as a Mother’s Day gift. He started posting them to Tumblr and Facebook in July of 23014; after Pleated Jeans ran a story about them at the beginning of December, though, the viral sensation train pulled out of the station and has continued chugging along ever since

It’s really, really easy to see why they went viral so quickly: It’s because they’re so. Freaking. Funny. I mean, how can you look at this and not start laughing your head off?

It’ll be a few years before Harper Grace understands this one, but it’s still awesome:

As is this one:

But hey, even if she’s a little ambivalent about Spider-Man, she’s still a gal after my own heart:

You guys. This child must be my soul sister. Makeup and bad guys are my favorite things.

Oh, and let’s not forget this one, of which I'm particularly fond:

Yes. So much yes.

The Bruckner family have also started selling prints of these glorious creations in their Etsy shop, in case you want to decorate your walls with them; they’ll even make you personalized ones illustrating the wacky things your own child has said or done. And if you don’t really do the Tumblr thing, no worries — You can also follow Spaghetti Toes on Facebook. I highly recommend it; personally, I can’t think of anything more delightful than having something like this magically appear in my news feed:

BRB. Making bacon and putting Cinderella in the DVD player. Best idea ever.