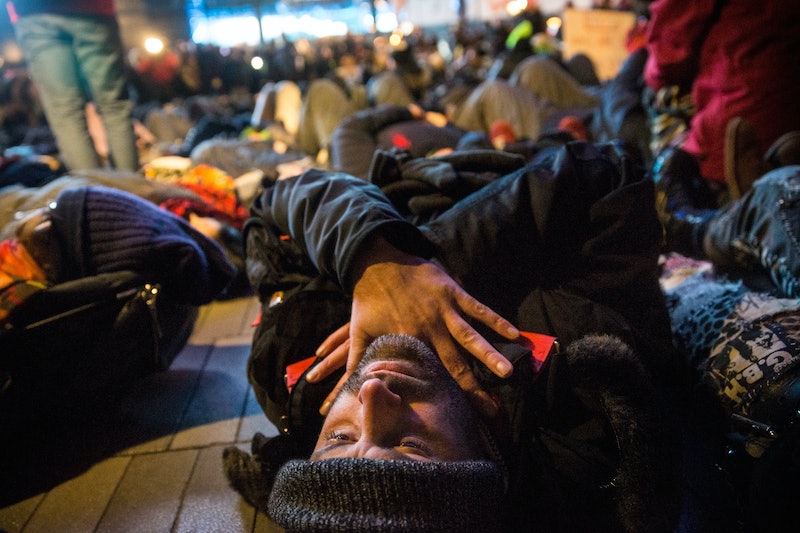 Mayor Martin Walsh and Police Commissioner William Evans cautioned activists planning to stage die-ins at Boston’s New Year’s celebration Wednesday from scaring the children or disrupting the family fun with their protests of the recent killings of unarmed black youth by police officers. Yes, really. Thousands, including families with small children, are expected to gather in Boston Wednesday for the city’s First Night festivities, which include ice sculptures, fireworks and a parade in Copley Square near the Boston Marathon bombings from last year.

While Walsh noted that the protestors would be allowed to march, he warned that police officers would keep them under close surveillance and could intervene if there were signs of disruption.

Demonstrators are planning to gather at Boston Public Library starting around 2:30 pm Wednesday, with a march at 3 pm and the die-in beginning at 5 pm. People from across the country have staged die-ins where individuals lie on the ground and pretend to have been killed by cops — a direct action that dramatizes the shootings of a number of black men over the past few months, including Mike Brown in Ferguson, Mo.; Eric Garner in New York, NY; Tamir Rice in Cleveland, Ohio; and John Crawford III in Dayton, Ohio. In recent weeks, grand juries refused to indict either of the officers responsible for Brown’s or Garner’s deaths, which sparked renewed marches and protests in cities nationwide.

We’re going to accommodate the protesters if they choose to do so. But we will not let it disrupt the events.

Evans and Walsh were joined at the press conference by Fire Commissioner Joseph Finn and city councilman Sal Lamattina where they stressed that the event was about family fun, not making political statements.

Evans noted that his children even attended the First Night celebration.

There are always 2-, 3-, 4-year-olds there, Evans said. And I don’t think they should have to see behavior that they have nothing to do with. They don’t understand what’s going on, they are still very innocent. And to disrupt the event on Boylston Street tomorrow night is a disservice not only to the city, but also to their character.

The thought being, I assume, that telling children that American streets are only safe for some of them, but not for all, is too scary.

It is scary. But it is also a scary truth that Americans of all ages should be made to reckon with. Youthful innocence will not save some children from being treated with suspicion and hostility on playgrounds. It certainly did not save Tamir Rice.

Think of the children, Evans urges the demonstrators. We are, they rejoin.

As one activist wrote on the Facebook page for the “First Night against Police Violence” protest, the point of the direct action is to raise awareness.

We have the mayor telling us not to protest today — although I don't see him telling police violence or institutional racism to take the day off, Edmund Schluessel wrote. Think of the children, he says — well, of course we do: every child who lost a parent and every parent who lost a child to the violence built into the racist system.

But the Boston officials’ opposition to the planned die-in has not just pointed out the presence of small children; both the mayor and the police commissioner stressed that the community supports its police officers and called upon the activists to treat the force with respect.

In recent days, the protests against police brutality against communities of color have taken on a new tension after a mentally ill man shot and killed two New York City cops, allegedly in response to Brown and Garner’s deaths. The NYPD reacted to the tragedy with strong words for New York Mayor Bill de Blasio and an unofficial moratorium on police work. ( The New York Times editorial board, in turn, had strong words for the NYPD. Rightly so.)

The cops’ deaths — and the police force’s response — have further shifted the terms of the debate into a two-sided contest between those who “support our police officers” and the activists who want to change how those officers operate in minority communities.

In confronting the planned protest at First Night, Walsh relied on similar logic when he explained that Boston supported its police force and that disruption was not welcomed.

I ask everyone who comes out tomorrow respect our police officers, respect their roles as keepers of peace in our city, and not distract them from their responsibility of keeping our families and our city safe, Walsh said.

We have to move past this divisive narrative of police officers versus protestors. Instead of viewing the die-in as an “us versus them” conflict, we should see it for what the activists intend it to be — a move for justice and respect in how officers interact with the communities they serve.