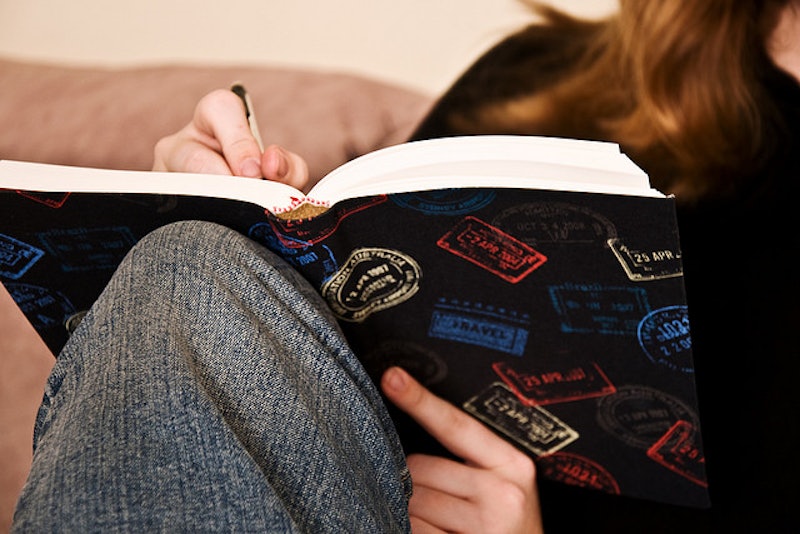 Making New Year's resolutions you can actually keep is a genuinely difficult challenge. Every single January, I half-heartedly make a list of goals for the new year, and by February, those half-hearted goals mean absolutely nothing to me. Lose five pounds? I'll gain seven. Take up yoga? I take up Orange is the New Black instead. Curb my bad shopping habit? I open a new line of credit at GAP. I am not a perfect adult, and I'm lucky that my career allows me the flexibility and the semi-stability to be able to be so reckless. I do think New Year's resolutions are stupid, but I also think constantly (and consistently) bettering ourselves is always a good idea, no matter what time of year it is.

With that said, I think we all (or at least most of us, myself very much included) could be better about certain things like health, money, and organizing. We can all eat better. We can all be more active and more aware of our bodies. We could save more, and prepare for retirement even though that seems like a million years away. We could probably make our lives easier and simpler by rearranging and being more efficient about how we clean and take care of our things. Basically, we could all probably work on our Adult Skillz.

So, here are 12 New Year's resolutions for all of you who hate New Year's resolutions. They're small, completely doable changes you can implement day-by-day. You don't have to expect any huge, quick transformations (because that's not how life works, anyway). You can ease into 2015 and not feel the pressure to become a brand new person—because the one you are now is already awesome.

1. Do something active at least every other day

Goals like "work out every day," and "spend three hours on cardio four times a week" are probably not reasonable for all of us sane humans. Instead, just focus on doing something. Like, literally anything. Repeatedly lift something really heavy, like a gallon of milk, or a child. Walk around your block. Walk to a coffee shop instead of taking the subway or driving your car. It's seriously not the end of the world if you don't want to take up running, but it is important to stay active (so you can live forever).

2. Try to make your bed at least five times a week

Making your bed sucks. I hate it. You hate it. We all hate it (except for our moms, but honestly, they probably hate it too). But making your bed makes you feel more accomplished, according to science. And it also encourages you to keep your room way more tidy and organized. And it makes your life seem like less of a clusterf*ck.

3. Clean your house as you go instead of waiting until it’s completely filthy and awful

Every other day, find something to clean. Dust your bookshelves on Wednesday, vacuum on Friday, clean the oven (*shudder*) on Sunday. It all sucks, but it's way better than doing it all in one day and spending four hours on a weekend cleaning when you could be doing fun things that don't drain your soul.

4. Mark a specific day in your planner when you should call your parents or grandparents or whomever it is that you always feel guilty for not calling enough

5. Try to at least eat one vegetable with every meal

Vegetables are not cheese and they are not crunchy, warm bread. But vegetables fill us up, and they're fibrous, and they essentially keep our bodies functioning properly, so eat them, OK?

6. Substitute that chocolate for fruit at least twice a week

Not eating candy at all is out of the question (let's not be insane here), so try to make some not-so-severe nutrition goals, like swapping your regular bag of Skittles with a bowl of frozen grapes, so that on Friday you won't feel as guilty ordering that Tiramisu at your fave Italian place.

7. Be a better listener

Listening intently to the people we love (like actually listening, not half-listening and then saying "really?" as a go-to response because we didn't catch everything) is the most important part of friendship, and I feel like all of us can work on this. I know we're not always going to have the solution to everyone's problems (and we shouldn't be expected to), but it makes all the difference when someone knows that their thoughts and feelings truly matter to you, a person they care about.

8. Wake up 20 minutes earlier than you normally would

Like actually get out of bed, and not spend twenty minutes checking your phone and laptop. No one is asking you to be up at 5AM doing jumping jacks, but your life actually does become WAY more productive and prolific when you wake up earlier, I swear.

9. Force yourself to drink at least three more glasses of water than you normally would

I'm terrible at drinking water. It's probably the one thing I'm really, really, exceptionally bad at. It's boring and doesn't taste like anything, and every time I drink it, I wish the liquid being poured into my body was Diet Coke and that's just not healthy. Since it IS the 21st century, you can download apps that remind you to drink water as well as keep track of how much you consume. Do you what you gotta do, boo.

10. Put away more money into savings

Even if it's just five dollars. OK, maybe you should put away more than five dollars (but I also don't know your financial situation, so it's obviously your call), but the point is that we all need to consider the future, even though the whole "carpe diem" thing is way more appealing. What if your car breaks down? Or you have to pay a gigantic medical bill? Your credit cards will only take you so far, and it's not like you want to be maxing those out.

11. Pay closer attention to how much money you’re spending on things

It's really unbelievable how much money we (at least, a lot of us) actually spend on stupid crap. Salads that cost over twelve dollars, manicures, smoothies, cab fare—everything. It all adds up so much faster than it all seems, so maybe this should be the year you do some financial cleansing. Like, maybe do away with your monthly Shellac manicure. Instead, buy yourself a few shades of the Sally Hansen gel brand and learn a few cool nail tricks on YouTube. Instead of spending six bucks for a green drink, make your own at home with a juicer (you can find some awesome deals for one on Ebay or Amazon). There are ways to save money and still live a good, fun life.

12. Try to actually read the books you buy

Maybe this is just me, but I tend to go way overboard when I buy books. If I see a title that totally intrigues me, I'll buy it even though I know I have five books ahead of me to still read. Getting a Goodreads account is an awesome way to keep track of all the books you read, and it kind of holds you accountable to finish everything you publicly list as "reading." It's like checking in at the gym on Facebook, but nerdier and better. Once you're there, you basically have to go through it, right?