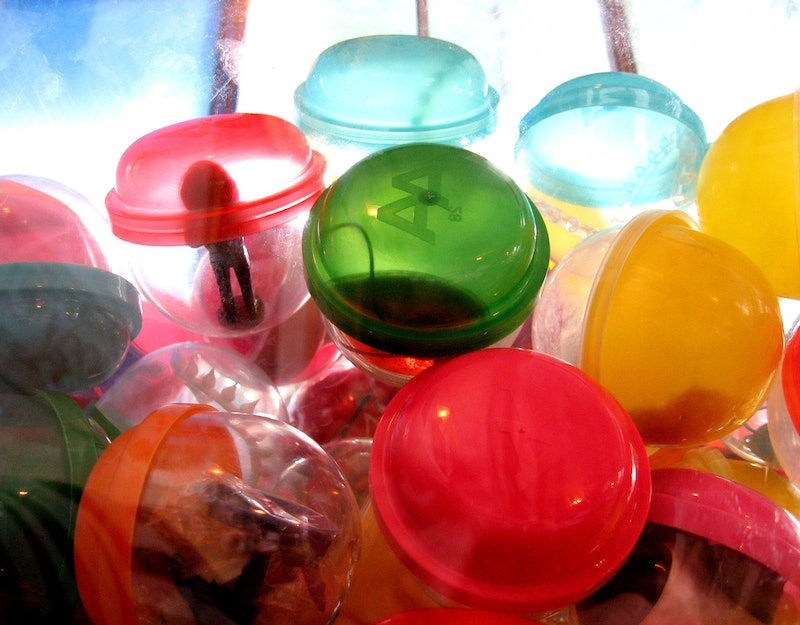 If there was one thing I hated when I was a kid, it was getting dragged out to go run errands with one or both of my parents. There was only one thing that made it bearable, which was this: If we were setting foot anywhere near the grocery store, I would occasionally be allowed to deposit a coin or two into the magical bank of vending machines located just past the checkout lines and take home a shiny new treasure. It didn’t matter that my “treasure” was usually made of plastic and prone to breaking within the space of a week; I loved them all dearly, and I still look back fondly on the seemingly magical contraptions that dispensed them. The whole experience was worth it: Sticking your quarter in the slot… turning the stiff metal handle… watching your little plastic egg disappear from the glass fishbowl up top and reappear in the slot at the bottom… opening the egg up… and finding out exactly what surprise awaited you inside. Awesome? Awesome.

To this day, I’m still tempted to dig out a couple of coins every time I do my grocery shopping — so for this Throwback Thursday, let’s take a trip down memory lane to the vending machines of our past. I’ve ranked 13 classic vending machine prizes, starting with the most boring and working my way down to the absolute best — y’know: The truly spectacular ones you were lucky if you encountered just once in your short little life. Cross your fingers you get the golden egg this time!

I had no idea what I was supposed to do with these. I mean, I knew what they were for… but six-year-olds are not generally in the habit of carrying around large quantities of keys, which essentially made them useless.

The key chains seen here are actually from the ‘60s, by the way (buy ‘em on eBay, if you like) — but given that vending machine prizes often look like they’ve been in there since the Dark Ages, I don’t feel bad for illustrating this entry with an older item.

So cheap. So tacky. Although that holographic necklace looks pretty sweet.

These suckers made you laugh your head off for the first five minutes; after that, though, the humor value dropped promptly to zero. I imagine most adults would find them more entertaining than your standard five-to-eight-year-old would, though.

I had so. Many of these. Seriously. I have no idea where they all came from, but I do know at least a few of them came from Stop n Shop. The rest of them may have hitched a ride home with me from Chuck E. Cheese or something. At least they were monster-shaped, right?

Bouncy balls were perhaps not the most exciting of vending machine prizes, but they were always good for at least 30 minutes of entertainment — especially if your home had an infrequently-traveled staircase you could throw it down repeatedly.

8. Stickers with Your Favorite Fictional Characters on Them

Because everything when you’re a kid is about your favorite fictional characters, stickers were surprisingly desirable — especially if they were the prism stickers featuring the Teenage Mutant Ninja Turtles that were so popular in the late ‘80s and early ‘9s. Fun fact: You can buy the one seen here on eBay!

However, as awesome as your stickers may have been, they were always trumped by…

7. Buttons with Your Favorite Fictional Characters on Them

Ninja Turtle stickers are cool, but Ninja Turtle buttons are forever. Or, y’know, for as long as you managed not to lose them. This one is also available for purchase on eBay.

The watches seen here are from one of those “try your luck” game machines, not one of the egg machines; as such, they actually look like they’re of slightly better quality than the ones I always lusted after as a kid. For some reason, my favorites were the digital ones, possibly because my dad introduced me to Hitchhiker’s Guide to the Galaxy at an incredibly early age. But hey, a timepiece for a quarter? That’s a win, giving this one a solid score of six.

Originally I was going to make this entry about M.U.S.C.L.E. Men, but then I realized that M.U.S.C.L.E. Men were never actually sold in vending machines. Perhaps my confusion is understandable, though; they share some remarkably similar qualities to the types of miniature action figures that did frequently appear in vending machines: Namely, that they were tiny and didn’t have any moveable parts. They just stood there, without even the benefit of articulated limbs. From what X-Entertainment tells me, Homies were one of the more sought-after ones, which is why they scored so highly in this ranking; in retrospect, though, they strike me as kind of… questionable. Or, y'know, outright offensive. Anyone else?

There’s a mini FM radio in there?! I must have it!

These things? Oh man. These were my thing, my jam, my vending machine holy grail. Who cares if they got covered in dirt approximately five minutes after you released them from their tiny plastic prisons? You could throw them at your bedroom wall and they would just stay there. You could slap a piece of paper a foot away from you with one and pull it towards you. They were magic, I tell you. Pure magic.

But not quite as magical as...

2. Whatever the Heck Was in Those Golden Eggs

Remember those machines that had a coveted few golden eggs scattered amongst the usual pink, blue, yellow, green, and orange ones? I was never lucky enough to acquire one, so alas, I will never know what wonders their shiny, golden insides held. For that reason, they take the number two slot.

1. Anything That Came Out of This Thing

Even if the prize was nothing more than a gumball, anything that came out of machine like this was automatically the best prize you could possibly get. Nothing beats a Rube Goldberg machine. Ever.

More like this
10 Eurovision Moments That Celebrate The Weird & Wonderful Camp Extravaganza
By Sam Ramsden
When Did Tamagotchi Come Out? In The U.S., 25 Years Ago
By Kaitlyn Wylde
Love Of Huns' Definitive Guide To A Seminal BRIT Awards Moment
By El Hunt
Hayden Panettiere Will Return For 'Scream 6': "We F*cking Won, Scream Fam"
By Jack Irvin and Jake Viswanath
Get Even More From Bustle — Sign Up For The Newsletter