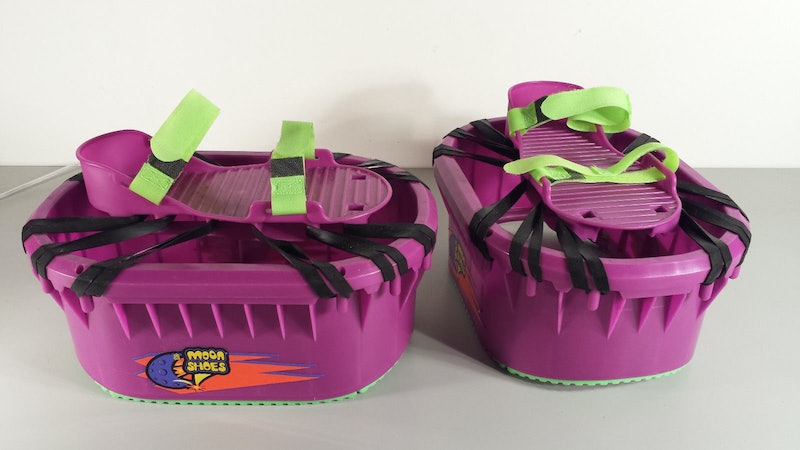 I know that these days, there’s a lot of talk about whether we’re coddling our children so much that they’re growing up into useless adults. But let’s face it: There’s coddling, and then there’s making sure that your kids don’t play with toys that could maim or kill them. It’s true that by the time the ‘80s and ‘90s rolled around, a great deal of improvements had been made in the realm of children’s toys. For example, action figures no longer regularly contained lead, futuristic toy stun guns were no longer simply brightly colored lighters capable of setting everything and anything aflame, and everyone finally realized it’s a terrible idea to give a glass-blowing kit to an eight-year-old. That said, looking back on my idyllic ‘80s and ‘90s childhood, I can say only this: Good gravy, how did I not break my tiny little face into a billion pieces playing with these things?!

This Throwback Thursday (shout out to the Cabbage Patch Snacktime Kid we covered a few weeks ago), let’s take a look back at some of the more unexpectedly dangerous aspects of our childhoods — and thank our lucky stars that we actually lived to be able to get all nostalgic about them in the first place. Even if Skip-Its were awesome (and they definitely were).

Tiny trampolines strapped onto the feet of uncoordinated kids? What could possibly go wrong? I suppose that by the time Nickelodeon was marketing them in the late ‘80s, they had made some improvements. The original design from the ‘70s were metal, not plastic, and all the working bits were exposed. There’s a whole lot of these suckers on eBay, by the way. So if you’re eager to relive your glory days as an imaginary astronaut, go for it.

Sky Dancers (and their less flouncy counterpart, Dragon Flyz) were first released in 1994 by Galoob. Kids are pretty much always fascinated by toys that can fly, so of course they were a big hit — figuratively and literally. Raise your hand if you managed to release a plastic fairy or dragonfly monster right into your face with a poorly-timed ripcord pull!

As a side note, I always found it a little odd that the commercial features little girls playing with their Sky Dancers in a nicely-decorated playroom; no parents I knew were willing to let us fly these suckers inside. They were an outdoor toy only, because the last thing anyone wanted was for their priceless cut-glass vase to end up shattered on the floor at the hands of an errant fairy.

Yes, let's encourage small children with no sense of restraint to punch each other repeatedly with unyielding plastic balloons! I’m not sure whether they were really more fun than a pillow fight — but they were certainly more painful.

Fun fact: Pogo Balls were invented by a couple of Belgian dudes in 1969. They called it the “Springbal.” Hasbro began marketing it under the name Pogo Ball in the mid-‘80s, leading to its widespread success through the early ‘90s. Like Moon Shoes, though, they weren't the best pick for clumsy children; twisted ankles and skinned knees abounded from Pogo Ball-related accidents.

I loved my Skip-It. I was awesome at it, too. But given how klutzy I turned out as an adult, it’s a miracle that I didn’t trip over it and face-plant on my driveway every time I used it. Furthermore, that ball seriously hurt if it whacked you in the ankle.

Manufactured during the mid-‘90s, Splash Off Water Rockets looked like a safer alternative to Estes rockets, which required actual engines and adult supervision to launch. Unfortunately, the rockets had a tendency to kind of, um, explode from the water pressure used to fire them off. They also reportedly flew off in random directions, which sometimes resulted in injuries to the hands and face. They were recalled in 1997.

I was a gymnast when I was a kid, so I always wanted one of these in my backyard. My logic held that if I had one, I could practice my back handsprings in between training sessions. In retrospect, however, it’s probably for the best that my parents didn’t spring (sorry) for one — broken ankles and other serious injuries would almost certainly have started plaguing our neighborhood had I actually acquired one. At least those foxes look like they’re having a great time, though.

This venerable staple of backyard pool parties celebrated its 50th birthday back in 2011, even though the potential for injury with them is pretty damn high (wet surface, bare feet — you do the math). Interestingly, though, it seems to be even more dangerous to use it as an adult. Between 1973 and 1991, a number of adults and teens who attempted to get their Slip‘N Slide on ended up with neck injuries, bone fractures, and in some cases, quadriplegia and paraplegia. Yikes.

9. That Plastic Goop in a Tube You Can Inflate Into Balloons Using a Straw

I used to love finding these things in goody bags at birthday parties. Too bad those “balloons” released noxious fumes when you inflated them.

The Creepy Crawlers set most of us grew up with was actually a revival of a toy first produced in 1965. Although the ‘90s version made several safety improvements over the older models — a heat-triggered door that remained closed until the newly-made bugs were cool enough to handle, and so on — I can’t help but think that melting little plastic granules under an extremely hot light bulb might not be the safest thing for kids to be doing. Easy-Bake Ovens had a similar risk of burns, but at least you're making actual food in them, right?

These suckers caused the most mayhem during the ‘80s. Gee, who would have thought that weighted objects with sharp metal ends which you toss across a heavily-trafficked area could do so much damage? Here, let John Krasinski explain. Lawn darts were eventually banned in the US and Canada in 1988, although numerous plastic alternatives still exist.

More like this
The 'Hocus Pocus' Sequel Finally Has A Release Date & It Makes Total Sense
By Shannon Barbour and Radhika Menon
Bella Hadid Just Wore Y2K-Inspired Pacifier Earrings
By Natalia Perez-Gonzalez
Everything To Know About 'My Big Fat Greek Wedding 3'
By Grace Wehniainen
Emma Thompson, Lashana Lynch, & Stephen Graham Lead Netflix’s 'Matilda'
By Sophie McEvoy
Get Even More From Bustle — Sign Up For The Newsletter