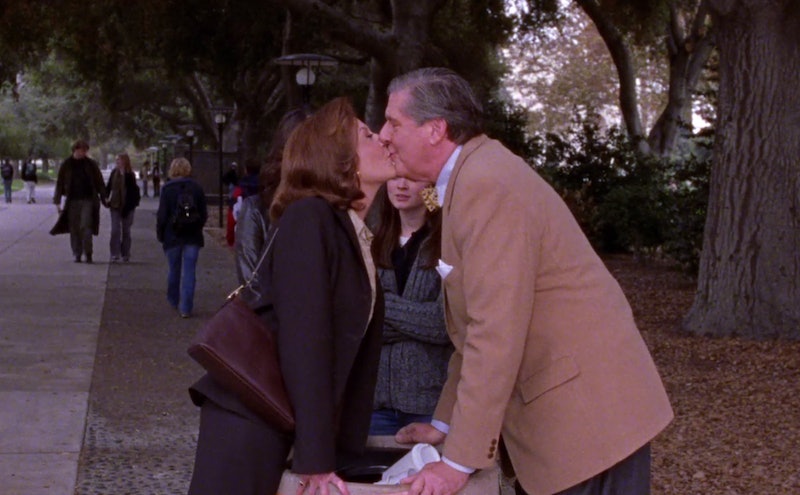 Emily and Richard Gilmore were a couple for the ages. With the passing of beloved actor (and Richard Gilmore portrayer) Edward Herrmann we are taking a look back at the best of his work. He was a skilled actor on Gilmore Girls and beyond, and his onscreen partnership with Emily Gilmore actress Kelly Bishop for seven years was filled with such well-worn love and mutual understanding that it's gone down as one of the show's most even-keeled and realistic romantic relationships.

Richard and Emily could have easily been played as pompous and one-dimensional, but in the hands of the two pros who played them they were entirely human. Herrmann and Bishop took a slow waltz through these characters, and along the way they taught us a lot about love. Luke and Lorelai may have been at once aspirational in their friendship-turned-romance, but their highs and lows often seemed more attuned to sweeps weeks drama than to the deeply human ticks of Richard and Emily.

The flaws in Richard and Emily's relationship — and how they overcame them — were often under less pressure than other romantic relationships in the show, and as such, they could show us truths about love that were harder to suss out in Rory's love triangles. They might not have been as cute as (pre-seventh season) Jackson and Sookie, but it was their deep and readily apparent flaws that made watching their commitment to each other all the sweeter.

It's About Finding Someone With Similar Values

You can be opposites in a lot of respects, but if you disagree on the huge, core things that will drive your life — money, what kind of family you want — you're destined to go different directions. Emily and Richard were hardly identical, but they wanted the same (or at least very similar) things out of each other and their daughter.

It's OK to Argue

These two were hardly conflict-free, but even during the rough times — and even when they briefly broke up — it was clear they were always going to be there for each other. Fighting all the time isn't super healthy, but knowing how to fight well is.

The biggest fights Emily and Richard had stemmed from lies. Richard not telling Emily he'd retired, for one, and refraining from telling her about his lunches with Pennilyn Lott or the fact that his mother didn't want them together for another.

It's About Choosing Each Other

Commitment isn't a one-time thing, it's a choice you make over and over again, every day. Emily and Richard take some time separated from each other, but one of the series' most romantic times came when they chose each other all over again.

It's About Dropping the Petty Stuff When Life Gets Real

When Richard lands in the hospital the first time around it's after a night speckled with marital bickering. Emily wants him not to loosen his tie at the table, but the second it's clear he's having trouble everything else drops out of view and the two share a very memorable and sweet scene.

You Should Have a Song That Means Something

And don't be afraid to change it up throughout your relationship. Emily and Richard's vow renewal song was inspired by a rough patch in their parenting — something they wouldn't have gotten to share at that ceremony if they'd stuck with whatever the first song they heard together was.