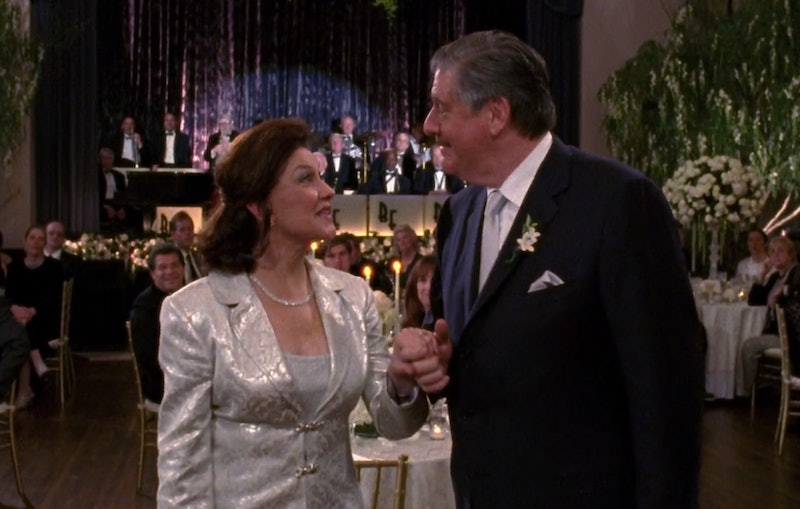 Today we lost a long-beloved actor. Edward Herrmann was known for many things — as the head vampire in 1987's The Lost Boys, as President Franklin Delano Roosevelt in at least three productions, including 1982's Annie, and a whole lot more. He was a distinguish, respected actor in all he did, from The Paper Chase to Grey's Anatomy and The Good Wife. But to me he was always and will always be his longest-running role, as patriarch Richard Gilmore in Gilmore Girls .

Herrmann's place in Gilmore Girls was a special one from the get-go: Creator Amy Sherman-Palladino never expected to actually be able to land the actor for the role, and it was clear through his place in the credits as a special guest star that we were about to witness a rarified presence. And Herrmann lived up to that specialness in Gilmore Girls: He held a place as both stuffy father and loving grandfather, disapproving rich man and delightful intellectual. He was at the center of one of Gilmore Girls' most fascinating dynamics — that between Lorelai Gilmore and her parents — and he never failed to deliver.

And so, upon hearing about his death, my brain immediately sought to comfort itself with some of the episodes that best showcased Herrmann's skill — and his ease in finding the heart and soul of a character who could have been too aloof for his own good. So let's explore some of these together — they're all on Netflix, in case you'd like to commemorate Herrmann's life (or comfort yourself) with a viewing session.

For the sake of both your emotions and mine I am going to leave out the Richard-centric episodes in which Richard is in the hospital, even though they contain some of the best of Herrmann on the show. If you are interested in crying a lot over those episodes regardless, they are "Forgiveness and Stuff," (1x10), and "I'd Rather Be In Philadelphia"/"Farewell, My Pet" (7x13/14).

The loving relationship between Rory and her grandfather was one of the most consistently sweet things the elder Gilmores' stories had to offer. That relationship really kicked off in one of the show's first episodes, in which Richard reluctantly takes Rory golfing and comes back with a new favorite person.

Any episode in which Lorelai's parents spend a significant amount of time in Stars Hollow is bound to be notable — often because someone's gonna end up mad or in tears. Herrmann's Richard manages to thoroughly annoy his daughter in this one, but that's part of what makes it what it is: A good showcase of the complex relationships the members of this family has with each other, and how Richard Gilmore fits into all that. It's Herrmann at his most thoroughly Richard.

This is another one that sparks conflict with Lorelai, but it's also one of the best showcases of Richard Gilmore (and Herrmann) at his best. In it, Richard takes the family to visit Yale, reliving his college days and landmark moments like his proposal to Emily. Of course, he's also being sneaky and trying to con Rory into going to Yale. But that doesn't mean he's not downright delightful in this episode. Whiffenpoofs!

Never is Richard more devastated than when his mother, the original Lorelai, passes away. Witness Herrmann perfectly blend tears and comedy in Richard's sweetest episode.

Commonly known as the episode in which Emily and Richard find a dog and are really cute about it.

The show's 100th episode, this one will rip your heart out re: Luke and Lorelai. But if you can look past the heartbreak it's also one of the show's most romantic episodes re: Emily and Richard and their vow renewal. That scene where Richard declares his and Emily's new song? Aw, these two.

"Welcome to the Dollhouse," Season 6, Episode 6

In which Richard realizes his mistake in allowing Rory to run away to his and Emily's house after she blows her life up. The shining moment, though, is the scene at the end Richard rescues Lorelai's dollhouse and actually owns up to his mistakes to his daughter — a rare moment of Gilmore humility.