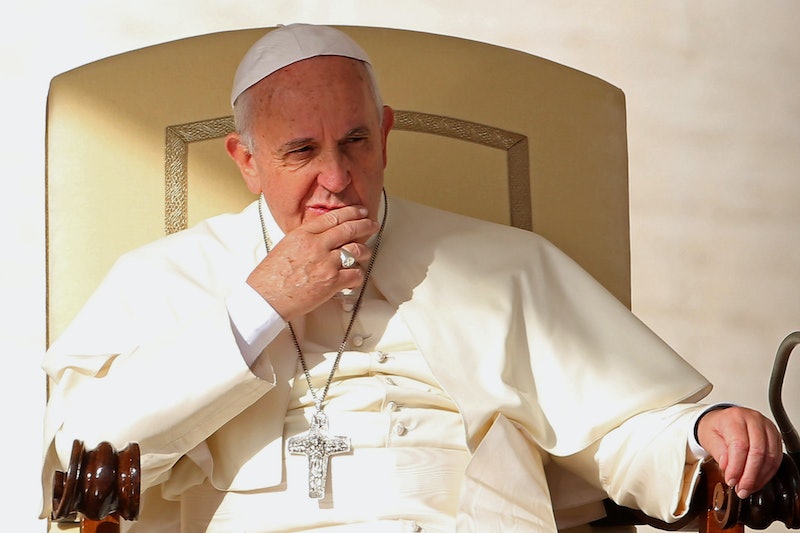 Pope Francis hasn't been feeling very cheery lately. A week after he gave his council of cardinals and bishops a Christmas present in the form of a blistering harangue about corruption, hypocrisy and dysfunction at the Vatican, the usually upbeat pope reminded everyone on New Year's Eve that we're going to die, so don't get too comfy in this world. But Francis, it's New Year's Eve! Shouldn't we think about the present, and not the all-too-distant future?

In his New Year's Eve address on Wednesday, Francis gave us all an existential dose of reality: Those cardboard party hats and glasses of champagne will turn into crumpled messes and a lingering hangover by morning. "How we like to be surrounded by so many fireworks, seemingly beautiful, but which in reality last only a few minutes," Francis said.

OK, Francis, everything fades. But what should we be thinking about come Jan. 1, when we're nursing our hangovers with burritos, regret and reality TV? Francis was less existential then, saying we will all be facing a "final hour," so let's start planning for our eternity. "There is time to be born and a time to die," Francis said, adding that the closing of 2014 is also the time to reflect on "the end of the path of life."

We live these moments disconnected from our past and our future, rather than being fully and really present facing eternity.

It's depressing, sure, but maybe the beloved pope has a point: As we make resolutions for 2015, we should have an "examination of our conscience" because we're at "the definitive time of salvation and of grace." And as part of those resolutions, the pontiff emphasized that we should make sure "the poor, weak, and marginalized are the center of our thoughts and daily actions."

In his final tweet of 2014, the digitally inclined pope was a little more succinct and a little less mournful, as he simply gave thanks to the Lord.

But we have to say thanks, too, Pope Francis. We're now sufficiently gloomy and will think only about your words as we watch Anderson Cooper's and Kathy Griffin's drunken flirtation usher us into 2015. We'll remember that these champagne flutes are "fleeting" — and fortunately, so are our hangovers. It looks like our end-of-the-year reflection has only just begun.